Owls are birds of prey who attack their prey easily and then feed on them. Owls don’t have teeth so they generally swallow their food. They eat varieties of species such as small animals, reptiles, small birds, fish, and other insects and animals. These owls’ digestion process is different from many other species of birds in the wild. So if you ask the question of the digestion process of owls and do they poop?  here we will discuss this only. 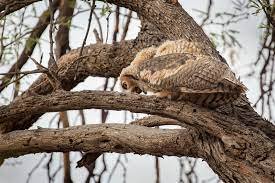 These types of owls feed on small insects, beetles, and earthworms.

So the question for many people is do these owls poop? Then yes, they do and they also regurgitate pellets. Owls intake food from the mouth but it comes out in two ways. From their back end, owls poop out and from their mouth, they regurgitate owls’ pellets.

Owls poop out the dirt from their back ends and it’s a slimy white substance. Its color appears due to uric acid and their poop smells bad. Those contain the waste of digested food and it has a foul smell. On the other hand, owl pellets which they regurgitate from their mouth don’t have any smell.

How do they poop?

The digestion process of owls is very unique as these carnivorous animals eat their prey as a whole. The proventriculus has enzymes, mucus, and acid that break down the meal. The gizzard or ventriculus separates the soft digestible part and the indigestible parts. The delicate parts are then passed down to the small digestive system where they are ingested into the circulation system. The hard aspects in the gizzard structure pellets, return up into the proventriculus. They stay here until being spewed by going through the throat and afterward the beak is prepared.

What are owl pellets? 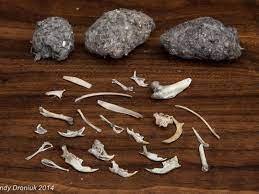 The compact lumps of undigested food are discharged from the owl’s stomach and are termed owl pellets. Owls swallow their food as a whole, this is why they are not able to digest the unbreakable parts like bones, fur, beaks, teeth, and furs, therefore these undigested food are formed into chunks that are regurgitated out of the owl’s mouth.

Owls don’t chew their food and smaller prey are swallowed whole while larger prey is torn into smaller pieces and then swallowed. Owls lack crop in their throat, a loose sac that stores food for later consumption, hence all the swallowed food enters directly into their digestive system. 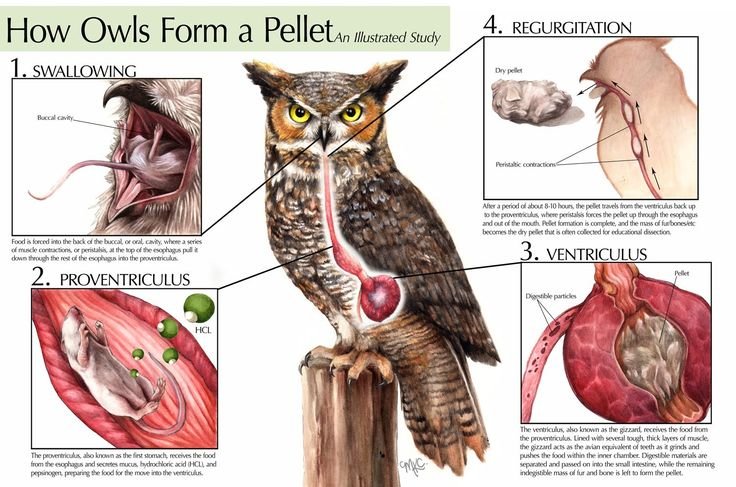 The soft parts of the prey are ground up by the gizzard and allowed to pass to the rest of the digestive system. The small intestine comes next in the digestive process, and it is here that food is absorbed into the body with the help of enzymes secreted by the liver and pancreas. The food reaches the cloaca after passing through the large intestine.

Cloaca, the end of the owl’s digestive tract, is an area that holds the wastes and products from the digestive and urinary systems of the owl. The cloaca has a vent that opens to the outside to dispose of the excretion. The indigestible parts like bones, furs, and feathers that were separated in the gizzard are compressed into a pellet.

How often do owls poop and regurgitate pellets?

Owl poop depends on the different species of owls and their diet. But on average, they poop several times. Larger owls poop less often than those smaller owls.

And the regurgitation of owl pellets from their mouth is a process they do around once a day. The owl pallets can be a combination of multiple animals and then combined into one. Owl pellets can remain in the proventriculus between 10-20 hours before being released from the owl’s mouth.

Owls are carnivorous birds who eat a variety of mammals and birds and they consume their prey as a whole which is why there is some undigested food remains with owls regurgitating from their mouth as owl pellets. And the digested meat is released in the form of poop from the back ends of the owls. The digestion process of owls is a little different from most birds. There are different species of owls and digesting time might vary from each other.

Owls are messy animals and they poop everywhere. They can poop in places wherever they want and it might be a people’s yard or lawn. Their poop contains waste digested food which smells very bad. But owl pellets don’t smell. owl pellets contain the hard and indigestible remains for their prey from the last 24 hours.