Owls are omnivore animals who generally hunt small animals, birds, reptiles, and amphibians. They are nocturnal birds who normally are active at night and hunt their prey. Their diet and nutrients consist of varieties of animals and other species but the majority have this question: do owls eat snakes? The answer is yes, but this also depends on the different species of owls. We will discuss this further in this article. 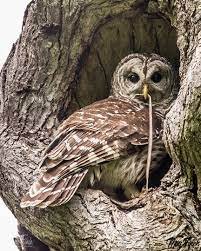 There are many types of owls, some eat snakes and some don’t. But it is very rare as owls often consume anything they find and if they find a snake, they don’t miss their opportunity to attack them. This food is one of the best diets for some species of owls.

Owls are great predators and have amazing eyesight that helps them to see many animals including snakes even if it’s at a far distance. Once they find their prey such as snakes, they swoop down on animals and grab them in their claws. They have sharp talons through which they can kill any animal in a minute. Owls commonly attack their prey in open spaces.

Snakes are found in the trees where they can hide between the leaves and branches and also in the holes so then they can protect themselves but once owls see them in open spaces, they attack them and then make them their food for a day.

Types of Owls that eat snakes

Both smaller and bigger species of owls eat snakes. Here are some of the big examples: 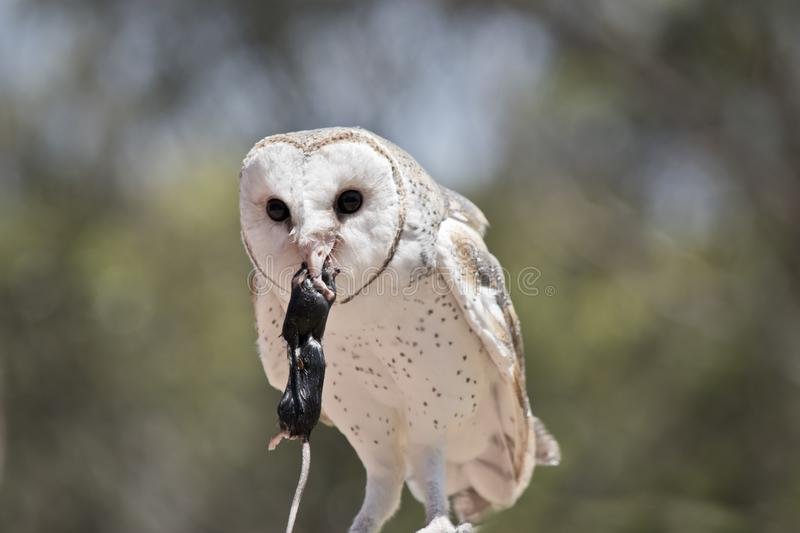 Barn owls feed on small animals like rodents, rats, lizards, smaller birds, and frogs. But they are also opportunistic eaters of snakes. They can attack snakes if they get the opportunity or if there are not any other options they don’t regularly feed on them. They only attack them if they are available to them in open places.

The barred owl is a medium-sized bird that generally feeds on various sizes of animals and birds. They are also a predator of snakes and can attack them and feed on them as it is a part of their diet. They catch these snakes by swooping down and then grabbing them with their claws.

Burrowing owls generally don’t attack snakes as they spend most of their time on the ground and they are also small in size, therefore they only attack smaller snakes. 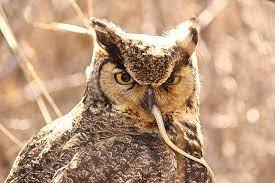 A great horned owl is one of the amazing predators and is large therefore they generally prey on larger prey. It is capable of hunting bigger birds and animals along with smaller ones and one of them is snakes. Snakes are easy prey to get attacked by the owls. The great horned owl can easily attack gopher snakes and feed on them. With their strong talons, no snakes would be able to fight back and if the grip will lose, those bigger snakes might fight back.

Pel’s fishing owl commonly feeds on fish as the name suggests. They also can attack water snakes if they get the opportunity. But feeding on snakes is an occasional act and not a regular diet. 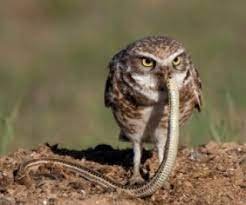 Owls attack and ear those snakes who are smaller in size and become easy to grab from their talons. Owls hunt snakes with sizes they can hold in their claws. Some species of owls might also hunt venomous snakes but it is rare as those snakes are their last survival prey. Still, there are some common types of owls that certain owls species attack and feed on them:

Baby owls known as owlets are too small to hunt any prey so they are cared for by their parents. They eat whatever their mother feeds them. Both male and female owls take care of their young ones. As the mother takes care of the owlets being in a nest, the father goes for a hunt and brings food for their babies. The babies generally feed on mice, rodents, and other smaller animals but if the male owl brings snakes then the mother breaks the snake into smaller pieces and then the owlets feed on them.

If you have this question about whether owls eat snakes or not, now it might be clear that yes they do. And this also depends on the different species of owls. Thus it is concluded that owls are opportunistic predators and whenever they get a chance of attacking snakes, they can do that and then feed on them. As for some types of species, snakes are a part of their regular food diet. Owls can only attack them in open spaces as snakes can hide between branches and secondly owls attack snakes with a size when they can manage to grab and then feed on them.