Flamingoes are beautiful-looking birds that are a tourist attraction because of their appearance. They are famous for their pink-colored plumage, long legs, and their bizarre body. Flamingoes are not pink colored from their birth, instead, they change colors from their food. Have you ever wondered why flamingos have pink color after they grow up?

This is because of the food nutrients they consume. When they are born they are of different colors but after consuming the foods which their parents feed them, they start changing colors. So what food do flamingos eat?  Here we will discuss this only. 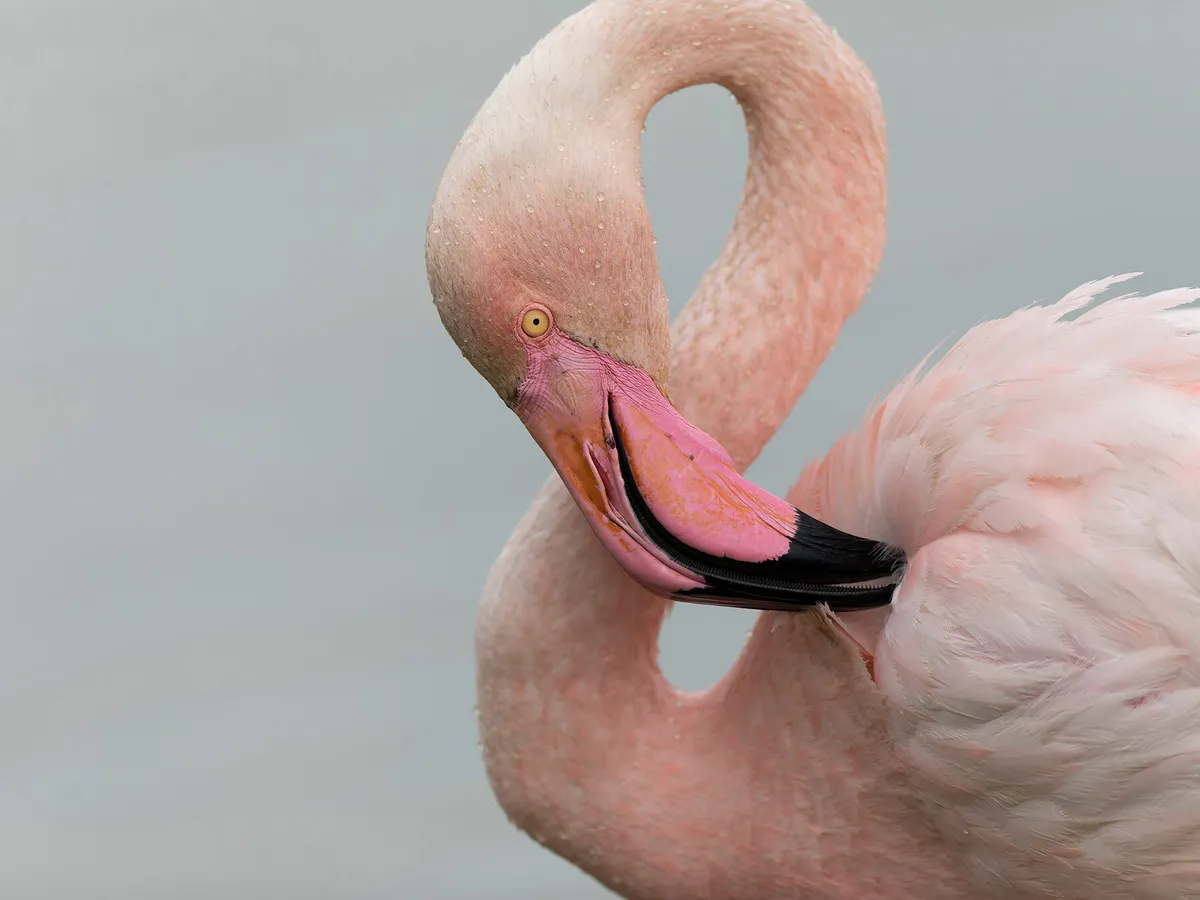 Flamingoes are omnivores and therefore eat both plants as well as animals. Whenever they get the opportunity, they feed on meat but they also eat a diet with high proteins and pigments. Flamingoes intake algae-rich diets and nutrients and this is why they turn pink throughout their lives. Algae has naturally occurring pigments which are also found in some vegetables. These carotenoids once metabolized, dyes flamingoes in pink color.

Here are some of the common food which flamingos eat:

The biggest of these species, as you might expect from its name, is the greater flamingo. It can stand between 3.9 and 4.7 feet tall and weighs as much as 7.7 pounds. At the other end of the scale is the lesser flamingo. This is still a large bird, however. It stands about 2.6 feet high and weighs around 5.5 pounds.

The different species of flamingo can be found all over the world. You can find populations in the Caribbean, South America, the West Indies, the Middle East, and India. And Africa is home to huge numbers of both greater and lesser flamingos.

What do flamingos eat in the wild? 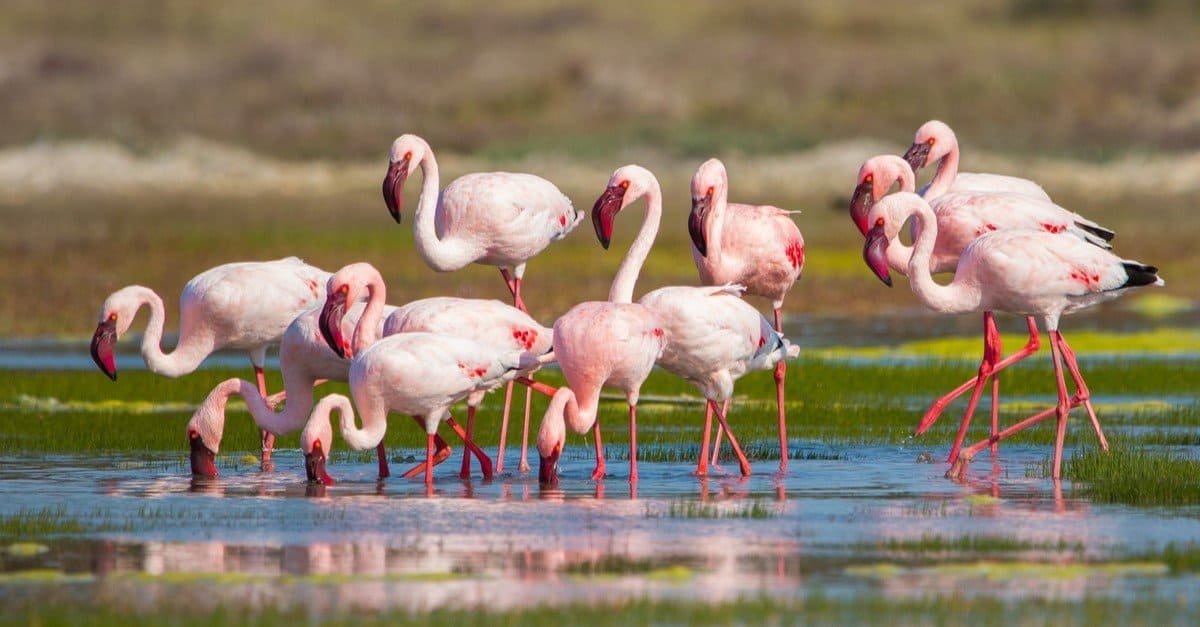 Several species of flamingos mostly feed on the same food and algae is one of the mainstream foods for flamingos. It also depends on what organism or prey is there in the water for them to easily grab and then eat.

The lessee James and Andean Flamingos generally eat algae and Greater flamingos, Chilean flamingos, and Caribbean flamingos feed on fish in the water, crustaceans, and some other larger organisms, normally found in the water. Here are some of the food which flamingos eat and survived on these:

Babies drink milk from their mother which has a bright red color and this is the reason for changing flamingo’s grey bodies into pink plumage.

These small crustaceans are also the main food for the flamingos, which are full of proteins. These also contain carotenoids which is the reason for the pink feathers of flamingos.

If these foods are easy to fit in their mouth then they grab them by sucking them into their breaks, therefore a nice food dinner.

Flamingos generally hunt for their food in the water and if they find water insects or flying larva on the surface of the water, they eat them.

What do baby Flamingos eat? 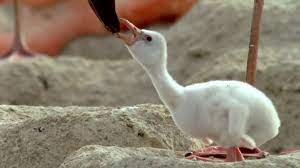 Baby flamingos are cared for and fed by their parents and they only consume crop milk for two months. The crop is an extension of the digestive tract, which allows birds to store food and partially digest it before either passing it to the stomach or regurgitating it to feed chicks.

Adult flamingos partially digest the food in their crop before they regurgitate the food into their baby’s mouth to feed them. These two months after chicks are born, they are fed the milk of the mothers which is often bright red and after two months, these young ones become capable of eating food like adults and they generally start to consume the food from the environment by finding food for themselves. They too learn from the adult flamingos and then they find food by placing their head underwater and searching for food such as small crustaceans, small fish, and algae.

What do flamingos eat during the winter?

Flamingo’s diet and nutrition during winter depend on where they live. Some groups of flamingos do migrate in winter in search of food. There are some species such as Greater Flamingos migrating from central Asia to India and James flamingos migrating to lower heights to find food as they can’t find any in their frozen lake ground. Once these birds find a suitable place for finding food, they settle down in those feeding places and feed on the same food as they do in the summers.

Flamingoes are gorgeous and appear wonderful whenever seen in a group therefore it’s an amazing sight to have. They generally form groups in huge numbers. These sociable birds do everything together from eating together to sleeping and flying together. These birds eat fish, shellfish, algae, and insects. Generally, they find their food on the water in the water and they catch them through their beaks. Hence, it is concluded that flamingos eat a variety of foods that contain pigments which is the reason for their changing colors from grey to pink.

Flamingos feed on both vegetation matter and animals and therefore they are omnivore birds. They generally find their food in the water so they filter and feed on whatever nutritious organisms and animals they find in their lake. They form a group and then filter their food which is an amazing sight. Flamingos eat algae, insects, and meat of various organisms found in or over the water surface. Their diet is mixed with mollusks, algae, shellfishes, small fish, larvae, and crustaceans.

Flamingoes are omnivores and that is why yes, they eat meat. They generally feed on larvae, small insects, mollusks, small fish, and various shellfishes.