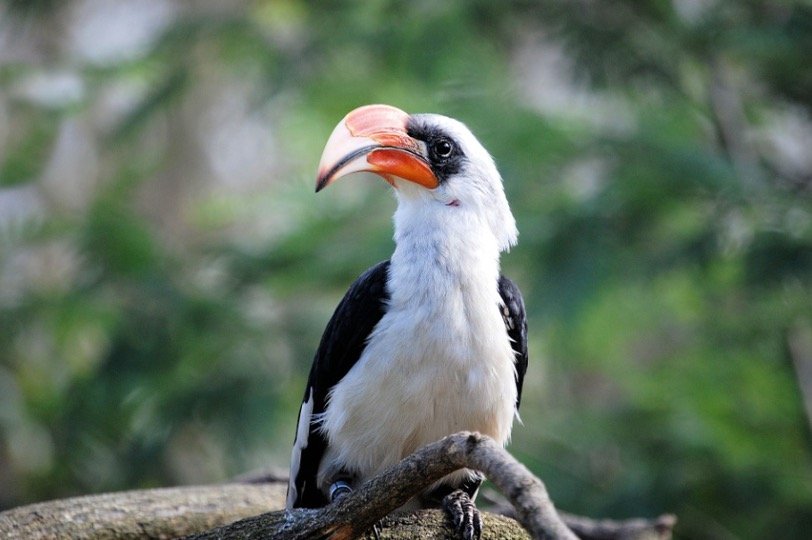 A hornbill (Bucerotidae) is an omnivorous creature belonging to the Animalia family, phylum Chordata, class Aves, order Bucerotiformes, and family Bucerotidae. Its length is up to 63 inches, and it weighs up to 13.6 pounds, with a lifetime of up to 40 years. A Hornbill is a bird that feeds on fruits and insects.

The large bill and horn are the most distinguishing characteristics. Hornbills are preyed upon by owls, eagles, and humans. Physical features include grey, yellow, red, blue, orange, black, and white skin colorations, and feathers on the skin.

The hornbill is a large, vibrantly coloured tropical bird with a long, curving bill and an immensely ornate horn on top. The hornbill is a bird known for its captivating excess and extremes. The toucans of the Americas have been compared to it because of its colours, appearance, vocalisations, and social behaviour.

However, many aspects of its anatomy and behaviour are still unknown, and we are running out of time to learn more about these fascinating birds, since habitat destruction and overhunting have driven several species to extinction. 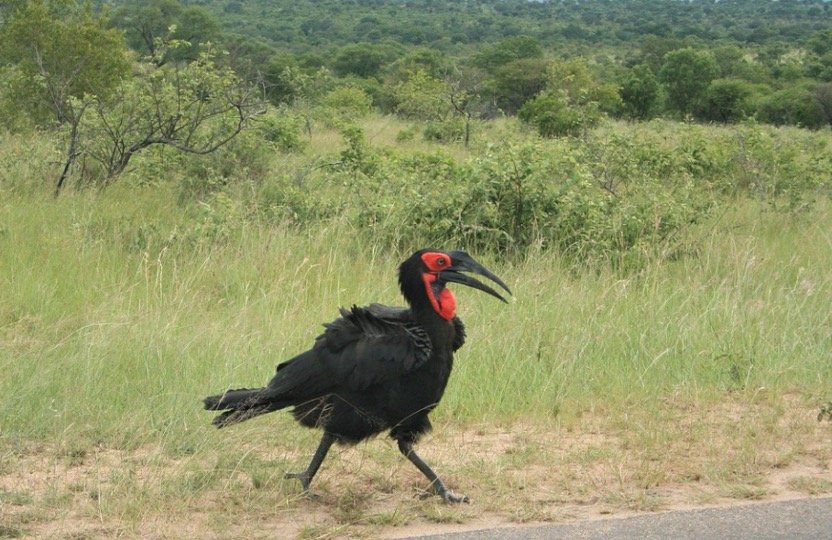 Hornbills are tropical birds that may be found throughout much of Sub-Saharan Africa, India, the Philippines, and the Solomon Islands. Arboreal hornbills favour rainforests and woods as their preferred environment, whilst ground-based hornbills prefer broad savannas.

On the plus side, the African red-billed hornbill and the Indian grey hornbill are both considered the least endangered species. Governments and conservation organisations will need to work together to safeguard current habitats and reduce illicit hunting in order to recover populations. To boost populations, several organisations are raising hornbills in captivity. 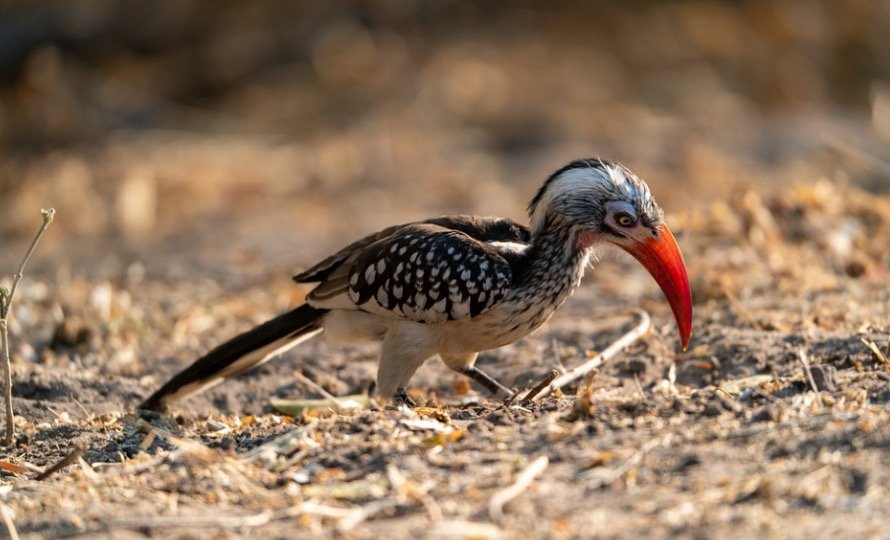 In the United States, this species is one of the most important tropical bird exhibitions. The San Diego Zoo has had a long relationship with the hornbill, dating back to 1951. It currently claims to hold around 30 species and to have produced more than 520 chicks across the zoo and the safari park.

There are still lots of opportunities to observe this amazing bird if you don’t reside in the San Diego region. The great hornbill of Southeast Asia may be found at the Saint Louis Zoo, the San Francisco Zoo, and the Denver Zoo.

Lastly, an Abyssinian ground hornbill may be seen in the Smithsonian’s National Zoo, and Zoo Tampa offers a variety of hornbill species in their aviary. 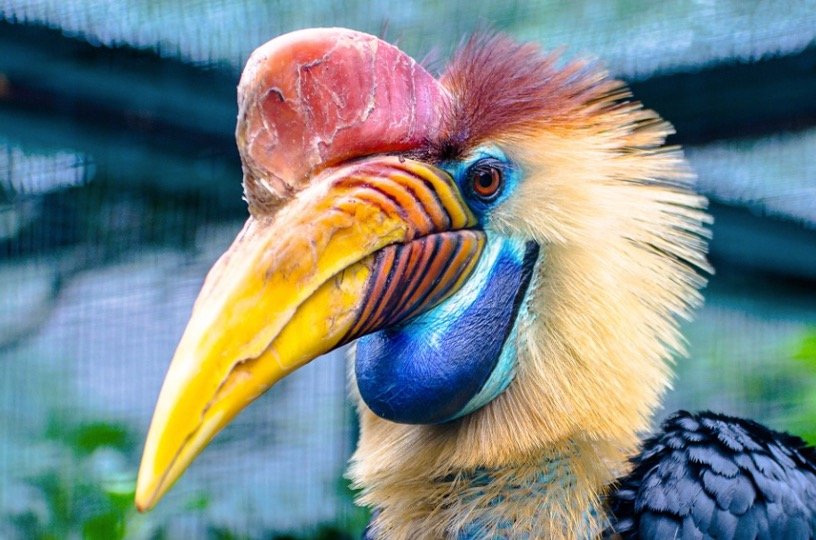 • The hornbill is an arboreal bird that builds its nest in enormous tree holes. Only two African ground hornbill species, the Abyssinian ground hornbill and the Southern ground hornbill, are exceptions. The majority of their time is spent traversing the savanna, eating mice, frogs, snakes, and other meat. When they are disturbed, they seek refuge in earth holes or fly.

• The kidneys of hornbill birds are unusual in that they have two lobes. It’s thought that this will aid the bird’s ability to digest water quickly. Scientists have discovered that they get virtually all of their water from a diet rich in fruits.

• Every day, hornbills consume between 20 and 33% of their body weight in fruit and meat. 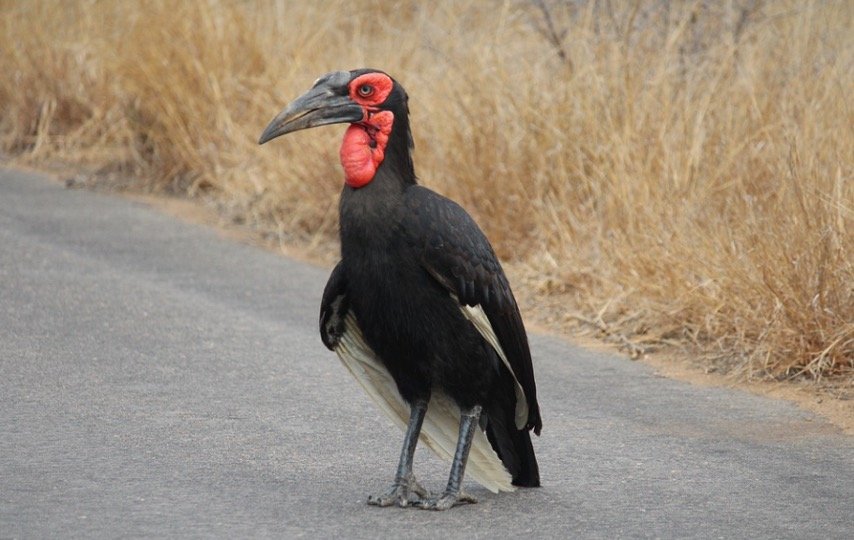 Bucerotidae is the etymology of a family of birds known as hornbills. This name is made up of two Greek words: bous, which means “head of a cow,” and keras, which means horn. When you combine the two terms, you get buceros, which means “horns like cattle.”

This is a reference to the huge horns that many animals have on their heads. The categorization of this bird is still up for discussion. Some taxonomists place the ground hornbill in its own Bucorvidae family, while others include it with the arboreal hornbills.

Another issue of contention is the sequence in which it should be placed. Some taxonomists include hornbills and the strongly connected hoopoes with kingfishers and bee-eaters in the Coraciiformes order.

Other taxonomists classify them as Bucerotiformes, a different order. In any case, the fact remains that approximately 60 species have been identified. The enormous, rhinoceros, Indian grey, and African red-billed hornbills are some of the most well-known. 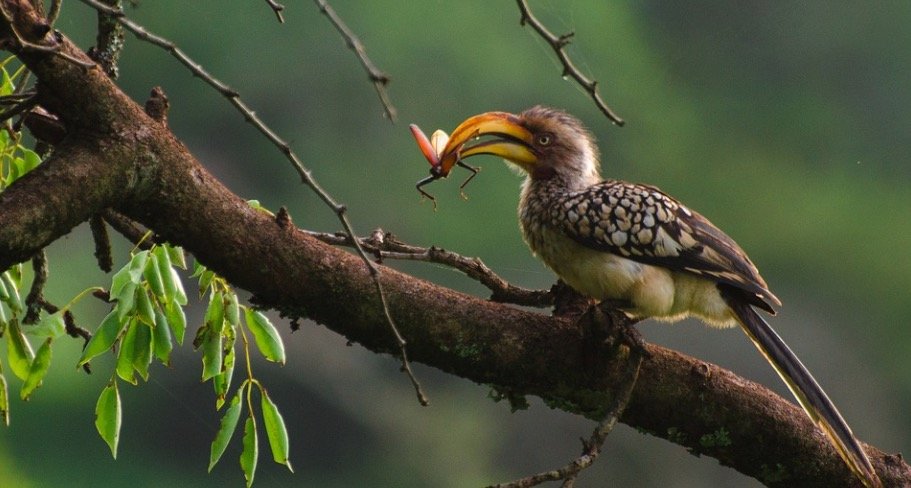 The hornbill bird has a unique look that distinguishes it from other birds. A huge head in relation to body size, broad wings, prominent eyelashes, and a long tail are all features. The plumage is a mixture of brown, grey, or black with white patterns.

This is sometimes paired with a vividly coloured arrangement around the neck or head in red, orange, blue, or yellow. Some species may brush their bills against the preen gland behind their tails to improve the colour of their bills.

The bill gets “dyed” a vivid red or orange colour as a result of this. The presence of a huge helmet or horn on top of the bill, known as a casque, is by far the most noticeable feature in some species.

Keratin, the same protein that makes up nails, hair, and horns, makes up this structure. Two of the neck vertebrae are fused together to support the huge weight of the head, bill, and casque, which contributes to the hornbill’s distinctive body structure.

Hornbills range in size from 19 to 63 inches in length. The southern ground hornbill is the biggest member of the family, weighing up to 13.6 pounds in extreme cases. The red-billed dwarf hornbill is the lightest.

This species’ female weighs just 3 to 4 ounces. Borneo’s helmeted hornbill wins the title of heaviest casque in proportion to body size. It accounts for a whopping 10% of the bird’s overall weight. In most species, the female has a substantially smaller casque and body size than the male. 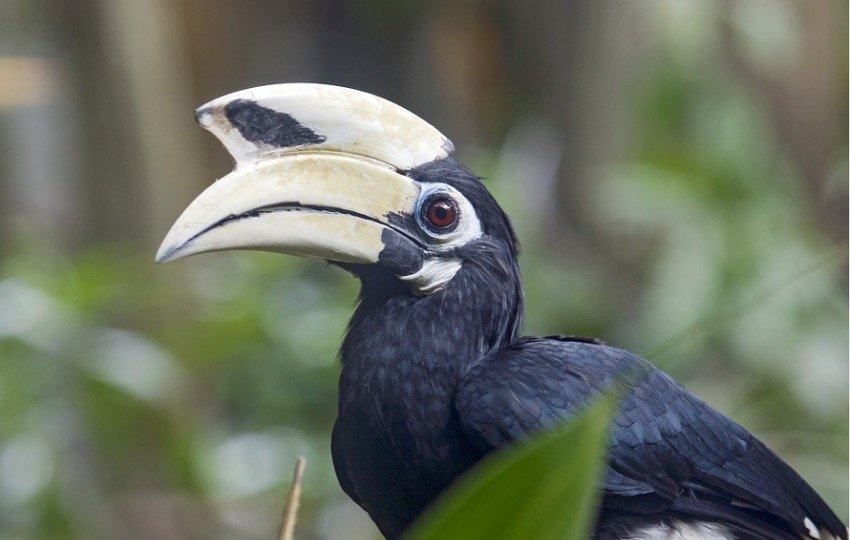 The hornbill is a loud bird that makes a variety of cries, including bellows, cackles, and brays, to proclaim its presence. The casque is said to be a hollow chamber with the goal of enhancing the sound of the voice.

This produces a loud, booming sound that is frequently mistaken for a lion’s voice. While flying, their wings emit a loud chuffing noise. Because the male has a bigger casque, the horn is thought to serve a secondary purpose as a vital sexual signal throughout the breeding season.

To other hornbills, the size and brilliance of the casque is a sign of health and energy. Males of certain species fight by “jousting” in the air with their bills. Hornbills are a sociable species that congregate in big flocks for protection, mating, foraging, and hunting.

These flocks might number in the hundreds of people. Hornbills rise with the light, preening or calling to their neighbours to start the day. Then they leave the nest in couples or small groups to seek food.

Its conduct includes a significant amount of self-care. A unique preening gland generates an oily fluid to aid cleaning in certain species. To clean its bill, the hornbill may rub it against a branch or bark.

Other species of hornbills have a reciprocal relationship with some hornbills. To acquire food, the eastern yellow-billed hornbill will collaborate with the dwarf mongoose. While the mongoose stirs up insects for the bird to eat, it will keep an eye out for potential predators.

The hornbill is an omnivorous bird that eats fruit, insects, and other small animals nearly exclusively. The bill features sharp notches on the end for breaking apart food and the capacity to harvest fruit from trees. Their bodies are also quite good at extracting the few proteins that are present in fruit. 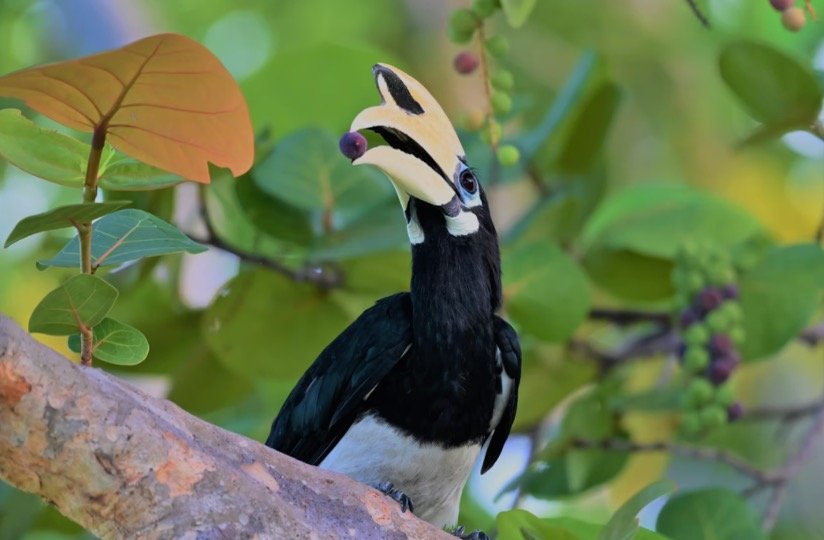 The hornbill is always on the watch for surprise assaults by birds of prey, especially eagles and owls. It is generally well-protected from climbing predators below and aerial predators above in the intermediate levels of the canopy.

However, because most species rely on trees for all of their needs, habitat degradation from logging and agriculture poses a severe danger to the hornbill’s existence.

Humans have long killed the hornbill for meat and medicine, but because the casques are extremely valuable on the international market, hunting intensity has lately grown.

This is a monogamous species of bird that spends most of its life with a single mate. Because of the intensity of their love, the couple’s romance isn’t a simple or disposable affair. Bill contact, vocalisations, and playful chasing are just some of the ritualistic activities involved.

As a sign of his dedication to the partnership, the male often provides food to his girlfriend throughout the year. The number of children they have together is determined by the bird’s size.

Smaller species can lay up to seven eggs at a time, whilst bigger species only lay one or two at a time. The eggs are laid several days apart by the female, resulting in a staggered hatching pattern.

She is extremely vulnerable during this time since she is unable to fly due to her moulting. The male, on the other hand, has the incredible capacity to safeguard the mother and chicks by enclosing the hole with mud walls.

It will then feed the female while she is incubating the eggs through a tiny hole in the wall. Ground hornbills, which nest in unsecured holes, logs, or rock faces on the ground, are the only species that do not engage in this activity.

The eggs will be incubated by the mother for 23 to 96 days. She will retreat from the mud-covered burrow after the eggs hatch, leaving her young behind. Even among the biggest species, these small chicks, which weigh just a few ounces, will battle with each other for limited food supplies.

The oldest sibling has the best chance of survival, whereas the others are frequently abandoned to starve. While this may appear to be a cruel strategy, it does ensure that backup chicks are available in the event that the oldest one dies.

It can take up to six years to attain sexual maturity, though lesser species reach sexual maturity considerably sooner. The hornbill has an average lifespan of up to 40 years in the wild, but it may live much longer in captivity.