When the time comes for birds to start a family, the sexes actively seek out compatible mates. Once a compatible couple has found each other, the sex act can happen quite quickly. In place of a penis, both male and female birds have a cloaca.
It is through this orifice, known as the cloaca, that the sex organs of a bird, specifically the testes or ovaries, release sperm or eggs. This hole also helps with defecation and urination.
At their largest during the breeding season, the cloacal orifices of both male and female birds can be seen projecting slightly from the birds’ bodies. Cloacal kiss refers to the area around the cloaca when it is optimal for reproduction. When the male is ready to mate, he will sit on top of the female, who will then spread her tail feathers to reveal her cloaca. The male typically arches his back and rubs his cloaca against the females.

How Do Birds Reproduce? 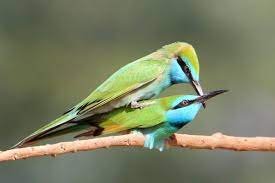 When a bird is sexually mature, its testes and ovaries enlarge to create sperm and ova. When the time is right, male birds will release their stored sperm into the female’s cloaca, and the sperm will then make its way into the female’s reproductive organs, where it will fertilize the ova and start the process of egg creation. 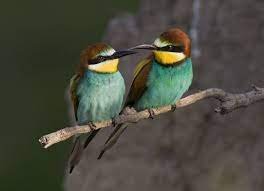 Birds may engage in lengthy courtship rituals before finally mating. There may be numerous stages to courtship behavior, beginning with the territorial claim and progressing to the actual wooing of a potential mate with displays of magnificent plumage, amazing flights, sophisticated songs, or even elaborate dances. During courtship, male birds display their physical prowess to attract females. This is done so that the female will lay her eggs with the male, who will then assist her produce offspring that are both healthy and powerful.

Ducks Mate Differently From Other Birds 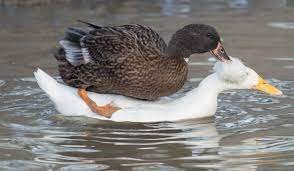 Cloacal kisses are inefficient, brief forms of contact that contribute little to the success rate of mating on land. Because of their nomadic lifestyle, ducks are having a harder time settling down and starting families. The male duck has adapted by growing a penis so that more of his eggs would be fertilized. Only 3% of ducks have a penis, thus this is quite unusual. When the days get longer and breeding season begins, male ducks get an entirely new penis. At that point, their penises begin to swell. 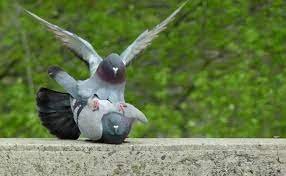 Once a female bird is ready to mate, it might happen with either a new partner each breeding season or renewal of links with a partner for life. Birds can assume a wide variety of postures and positions when mating, the most typical of which is the male bird perching atop the female. Both birds will face in the same direction and the female will either hunch, lay down, or bow to help the male keep his balance. And then she’ll swish her tail out of the way, exposing her cloaca, and he’ll arch or curve his body to reach out and touch it. Although the “cloacal kiss” only lasts a fraction of a second, it is sufficient to transmit the necessary number of sperm to successfully mate. It could take a while longer for the birds to find their equilibrium if they continue to touch each other, and multiple “kisses” could happen in a short amount of time.

A bird’s hormones will keep them thrilled for a week or longer, and they may mate multiple times during that time to maximize the likelihood of fertilization.
Several species of swans, geese, and ducks lack cloacas, however, this is not the case for all birds. Male birds, on the other hand, have a penis that they use to insert into the female during mating. Unlike in mammals, where blood is used to erect the penis, in reptiles and amphibians, the penis is created by an expansion of the cloacal wall. 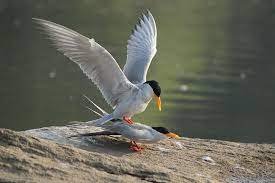 Having a penis prevents sperm from washing away from an exposed cloaca when some species of ducks mate in the water. Even while penises rather than cloacas are present in a number of different bird species, including cassowaries, kiwis, and ostriches, mating still takes place over the course of a brief encounter. Mating results in sperm making the journey to the ova, where fertilization can take place. It can take as little as a few days for the nest to be ready for eggs to be laid, or as long as many months.

How Long are Birds Pregnant For?

The eggshell forms in the embryo’s first stage of development and colors are added later. As the process of ovulation and egg laying takes roughly 24 hours, female birds usually only lay one egg every day.

Is mating necessary for egg laying in birds? 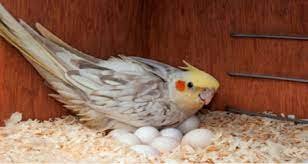 Pet birds frequently experience the problem of unintentional egg laying. This is what happens when a pet bird that was never intended for breeding or production begins laying eggs—often without a suitable mate. Although cockatiels are the most prevalent species to exhibit this trait, it has been observed in other birds as well.
Few pet bird owners take the time to learn their avian companion’s sex or that birds can produce eggs even when they are single. Inspiring birds to start nesting can be done in a variety of ways.

Understanding how these intriguing birds’ bodies work for reproduction and mating can be gained from studying their natural history. Reproduction uses energy, and animals must balance the need to do so with the need to survive on their own in the wild. This compromise is visible in a number of ways, but the most crucial one for birds kept as pets are that they have a finite quantity of resources that they must allocate between self-maintenance and reproduction.

What to do if You See Mating Birds? 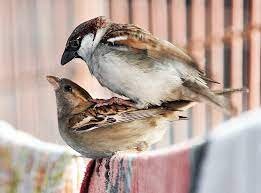 If you come across a pair of birds engaged in copulation, it’s best to give them space; getting too close could frighten them and cause them to fly away, which would put a damper on their courtship and damage their relationship. If the pair breaks up too soon, it could be hard for them to successfully mate and raise a brood. If the birds are extremely agitated, they may abandon their carefully selected territory in favor of a new one that may not be as conducive to the needs of their hatchlings.
It’s possible the birds may stick around after mating to rear their young. While this may be a rare opportunity for birdwatchers, they should nevertheless exercise caution and keep their distance from the nest to prevent harm to the baby birds. When birds are stressed out by human interaction, they may abandon their nest and young. Birdwatchers should take extra precautions to avoid disturbing nesting birds because drawing attention to the nest might also attract predators.