One of the most popular species of bird in North America is the Eastern bluebird. These indigenous birds sing wonderful melodies and have iridescent blue feathers and brilliant orange breasts. Their calm, sociable demeanor has won over many bird watchers. There are lots of folks who desire to lure these elusive critters into their backyards but don’t know where to begin.

What Foods Do Bluebirds Eat? 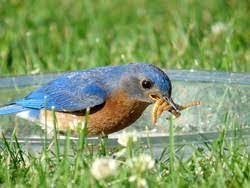 Insects and berries make up the bulk of an Eastern Bluebird’s diet. From their low vantage points on trees and on power lines during the spring, summer, and fall, they can be observed scouting over the area below. From this vantage point, they look for flying insects on the ground. In order to catch their prey, once they’ve spotted it, they descend slowly while flapping their wings and following the movement of their target. Crickets, spiders, earthworms, snails, grasshoppers, and beetles are typical prey items.

Also, know What Do Cardinals Eat?

Although it is unusual, they will also consume small lizards and frogs if they can catch them. When insects become scarce during the winter, Eastern Bluebirds shift their diet to focus primarily on berries.
Though bluebirds often fly to warmer climates during the winter, those who choose to remain in their home range during the colder months will discover that many of the arthropods described above are scarce. In such a scenario, they consume plant foods, particularly fruits. Plant matter consumed by the three bluebird species varies somewhat due to their geographic ranges.

What Do Bluebirds Eat in the Winter? 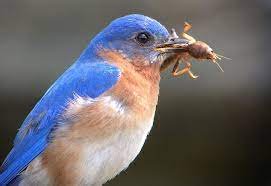 As opposed to traditional seed bird feeders, platform feeders will attract bluebirds to your yard. Feeding bluebirds either dried mealworms or live mealworms, butterworms, waxworms, or earthworms are the best way to entice them to your bird feeder. These items can be purchased at any store selling pets, bait, or feed. It’s best to use dried food until you start seeing birds at your feeder, at which point you can convert it to live food if you so choose.

Do bluebirds eat from feeders? 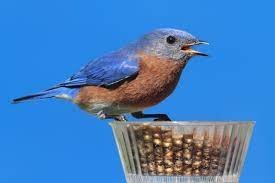 Mealworms, especially live ones, are a favorite treat of bluebirds. You can get mealworms at any pet store or bait shop. If the thought of handling a live specimen gives you the willies, you can always opt for the freeze-dried variety. You can even cultivate your own if they don’t squick you. Later on, in their life cycle, mealworms metamorphose into darkling beetle. During the colder months, bluebirds supplement their diet with berries, figs, and other fruit. Mistletoe berries and poison oak drupes are two examples of the fruit that they will happily consume. Also, peanuts seem to entice them.

When and where do bluebirds typically hunt?

Bluebirds have a remarkable hunting technique. They sit on a perch and watch for an insect in the grass, thus they need a wide open space bounded by trees, shrubs, or posts. They then proceed to casually collapse upon it. The mountain bluebird excels at this and will even wait in midair over the grass for prey to fly by. While it isn’t their favorite approach, bluebirds may also catch insects in mid-flight.

How Do I Attract Bluebirds to My Yard? 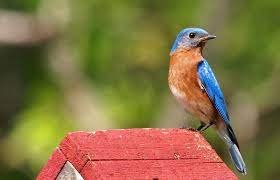 Attracting bluebirds requires clearing off some grassy areas and providing perching spots for the birds in the form of trees, bushes, or fence posts. Maintain a level of visibility for the birds by preventing the grass from becoming too tall. Fresh water in large quantities is also required. Bluebirds enjoy moving or running water, so make sure there is some around. Adding a pump to an ordinary birdbath transforms it into a beautiful fountain for very little cash.

Does anyone know what kind of food bluebirds prefer?

As insectivores, bluebirds can be lured to your yard by providing them with insects such as mealworms and other worms. You should also plant berry bushes in your yard for the birds to use as a food source during the berry season and the colder months. You may go a long way toward making your bluebirds happy by planting trees and shrubs with varying fruiting periods.

Where is the best place to put a bird feeder? 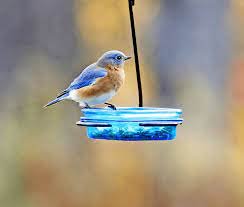 The bluebirds’ preferred habitat is a wide-open area with sparse tree and shrub cover. You should put your bird feeder in the middle of a grassy area in your yard. Before putting up a bird feeder in your yard, make sure the birds won’t be harassed by predators like domestic cats or strays.

What do baby bluebirds eat?

Bluebird nestlings consume the same insect and berry diet as their parents. Every fifteen to twenty minutes, their parents bring them a snack. Infants need more calories per ounce than an adult bluebird because they eat more frequently and grow more quickly. It’s interesting to note that bluebirds can lay multiple clutches of eggs in a single year and that the young from the previous year often help to feed the young from the new clutch when they first emerge. Parents who are doing their best to ensure their infants’ health and happiness will find this very useful.