One of the most common types of birds to sing, juncos may be found just about anywhere. Their distribution spans much of North America, from far northern Canada and Alaska, all the way across the United States, and into northern Mexico.
The seasonal changes in nutrition cause the junco’s diet to change. Their mating season is in the summer when they eat mostly insects and common plant seeds. In the cooler months of fall and autumn, their diet shifts to consist primarily of grasses and weeds. 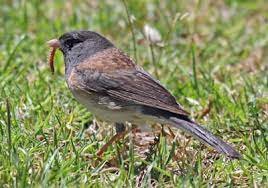 The snowbird is a common nickname for a junco. They spend the long summer days eating insects and seeds from common plants in their nesting areas in the mountain forests and the Northwoods. Once cold weather settles in across much of the Midwest and Southeast, Juncos can be seen in the woods’ periphery, thickets, and suburban areas. Seeds of weeds and grasses make up the bulk of a junco’s diet at this time of year. They are also common sights at bird feeders in residential yards. 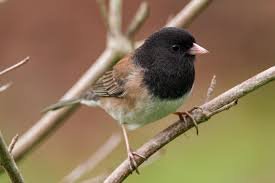 A dark-eyed junco’s diet is primarily composed of seeds, and this preference persists throughout the year. In fact, tiny seeds make up more than 75% of a junco’s diet. Even more seed consumption occurs during the colder months. Most junco diets consist of tiny seeds. They include grass seeds, tiny grains, and weed seeds. Ragweed, smartweed, pigweed, lamb’s-quarters, chickweed, purslane, vetch, sorrels, thistles, and crabgrasses are just a few of the weeds whose seeds make up a significant portion of their diet. Flowers like zinnias and cosmos are eaten, as are their seeds. During the warmer months, they also snack on insects including beetles, moths, and caterpillars. Juncos also eat weevils, grasshoppers, true bugs, ants, wasps, and spiders, among other insects. Almost half of the summer meal is composed of these invertebrates. Parent juncos primarily feed insects to their nestlings. Once the young fledge, they begin eating more seeds.

What do juncos eat in the winter? 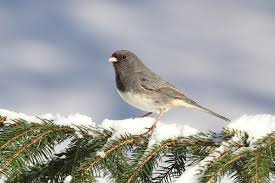 Most juncos’ diets consist of the seeds of weeds and grasses that overwinter in fields, open forests, and even your backyard across their whole range. On rare occasions, they’ll switch to a diet of winter berries.

What do juncos eat in the summer?

Summertime juncos subsist primarily on insects. Many insects, including grasshoppers, beetles, caterpillars, and even spiders, are favorites of these creatures. To supplement their meat diet, they’ll eat berries and seeds.

What kind of seed do juncos eat? 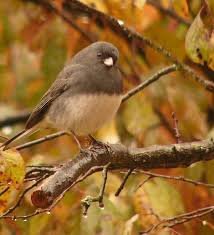 The majority of a junco’s year-round diet comes from the seeds of plants such as sorrel, buckwheat, and lamb’s-quarters. Juncos will often scavenge on the ground for sunflower hearts, broken corn, or millet that has dropped from your bird feeder.

What is the best bird feeder for Dark-eyed Juncos?

Juncos are predominantly ground feeders, thus they do best on low, level platforms or in trays. A platform feeder with a wide roof to keep out the snowy or rainy winter weather and keep seeds dry is ideal. More frequently than not, though, juncos will feed on the ground under the feeders where seeds have fallen out. 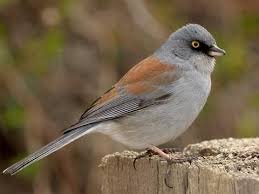 The junco is predominantly a ground feeder. They move around on the ground in a hopping, running manner, occasionally kicking the mulch around in an effort to uncover tiny weed seeds and insects.

Also, know What Do Cardinals Eat?

They also “ride” the seed head to the ground using their body weight to collect seeds from low-lying plants.

In the winter, they frequently flock together with other sparrows. Where their territories overlap, you can often find them hanging out with Chipping Sparrows and White-throated Sparrows. In the winter, animals seek shelter in the undergrowth along roadsides and around bird feeders.

There is a clear hierarchy within winter feeding flocks. There will be one male who rules over the others. Males have more power over females, whereas females have more control over juveniles. During the winter, they cluster together and graze on the ground while twittering and showing off their white outer tail feathers.

They eat in broad daylight yet run for cover at the first indication of trouble. They’re more likely to take refuge in low trees and the tops of the undergrowth now than they were before. They keep an eye out for any intruder while giving slapping and twittering cries. 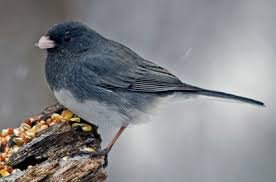 Water is essential for the survival of all bird species. But I haven’t seen as many juncos at my bird baths as I have other species. They may be using water from puddles and snowmelt because they spend more time on the ground. I recently discovered that they also sip dew off flower petals.

Juncos could prefer a ground-level dish to a standard bird bath. To do this, you can use shallow saucers filled with water and set them on the ground. To prevent your potted plants from drowning, try using the glazed saucers you normally use with clay pots.

Heated bird baths may be helpful for Dark-eyed Juncos throughout the winter, as these birds only venture to the ground’s edge. In the absence of such a facility, you should heat water each morning and replenish the birdbath. For the birds’ sake, warm water that remains liquid for a few hours should be available.

Where do juncos get their food?

The junco is an expert scavenger. They forage mostly on insects and seeds on the ground, which they quickly grab and devour. Occasionally, a junco will stop to pluck a berry from a shrub on its way past.

How often do juncos eat? 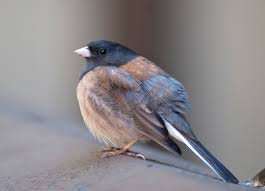 Juncos tend to do most of their foraging and feeding throughout the day. When they have chicks to feed, they will forage much more frequently. During the winter, you can have a flock of Juncos frolicking in your backyard. Depending on your location, you might be able to witness multiple species. Eastern juncos and western juncos have diverse plumage and pattern variations; nonetheless, there is significant overlap in the states of the central United States.