Turkey vultures, also called turkey buzzards or simply buzzards, get a poor name because of their bald, wrinkled heads and penchant for feeding on dead animals. These birds are neither beautiful nor colorful like raptors or songbirds. Vultures are still interesting, though. Furthermore, they serve an essential function in the natural world.
The turkey vulture has earned the nickname “nature’s rubbish disposal” for its voracious appetite. Almost all of their diet consists of dead animals, especially mammals. The dead bodies of various animals, including birds, reptiles, amphibians, insects, and even mammals, are also fair game.
Their wide distribution from southern Canada to the southernmost tip of South America means that the types of carrion they feed on vary from place to place. 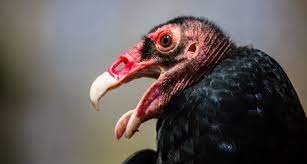 Vultures, especially turkey vultures, feed mostly on dead animals, young animals, and sick mammals. Because of their omnivorous nature, they consume a wide variety of plant and animal foods.

Turkey vultures prefer to dine on carrion or decomposing animal flesh. They’ll eat anything, but they prefer a freshly dead animal. These vultures have a keener sense of smell than other vulture species, allowing them to spend less time foraging.

Dead birds, reptiles, amphibians, and insects are all fair game for turkey vultures. Due to their clumsy feet, turkey vultures must feed on the ground, where they find most of their prey. Without access to carrion, young, or sick animals, these birds will resort to eating things like human trash and produce. 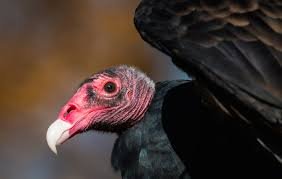 The nesting locations of turkey vultures range from rocky outcrops and caves to ledges and thickets, mammal burrows and hollow logs, downed trees, and structures. These nesting areas are typically 13 degrees Fahrenheit cooler than their surroundings and far from any human activity or disturbance. Turkey Vultures may regularly dine in human settlements, but they prefer to set up their nests in remote areas. 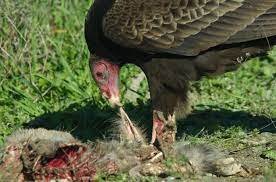 How do Turkey Vultures Appear?

Named for their resemblance to turkeys and their bright red heads and necks, vultures are also known as turkey vultures. They look like turkeys, but they’re smaller and have a different form. These vultures are entirely covered in brown feathers, and their wings end in pointed “fingertips.”

What do turkey vultures eat in the wild? 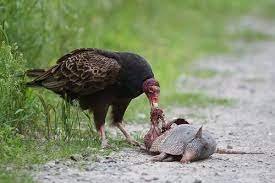 In the wild, turkey vultures will dine on whatever is available. The birds are scavengers that will devour whatever they can find. They’re pickier about their food when it comes to carrion, but they’ll eat anything. Mammals, both wild and domestic, from tiny mice to massive ungulates like deer or a recently slaughtered cow, make up a significant component of the vulture’s diet. Turkey vultures are opportunistic predators, feeding on a wide variety of prey, including smaller birds, reptiles, amphibians, and insects.

Dead alligators, turtles, snakes, frogs, fish, mussels, shrimp, grasshoppers, or snails are some examples of non-mammal dietary sources. Plants are also a source of food for turkey vultures. However, as these birds primarily rely on carrion, they often unwittingly consume insects and vegetation as byproducts of their diet. However, historical records reveal that vultures will knowingly consume vegetation (often decaying fruits like pumpkins, coconuts, or berries) and insects when carrion is scarce.

The diet of the turkey vulture throughout North and South America is the same. In their South American habitat, vultures eat a wider variety of mammalian prey than elsewhere. This includes monkeys, anteaters, and capybara.

Where Do You Find Turkey Vultures? 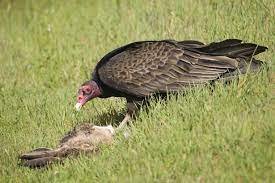 Throughout the United States, Turkey Vultures are regular sights. As well as Mexico, Columbia, and Ecuador, Canada is a possible wintering ground for these birds. In terms of both food and where they choose to set their house, Turkey Vultures are known for their adaptability. Vultures will use abandoned nests or ledges to raise their young.

What do turkey vultures eat in the desert?

Desert-adapted turkey vultures are a thriving species. They subsist almost entirely on carrion, which is abundant even in arid regions. Vultures in this area might eat anything from deer to coyotes to foxes to snakes and lizards. Turkey vultures in the desert will also eat other birds, including roadrunners, other raptors, and ravens.

What do turkey vultures eat in the winter? 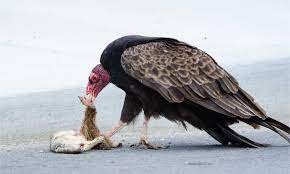 The turkey vulture’s principal food source in the winter is still carrion. Rodents, raccoons, opossums, rabbits, and deer are among the most common prey of these scavengers, however, this list may change slightly with the seasons.

Breeding vultures in the northern hemisphere often spend the winter in the southern United States. Perhaps in the winter, these birds eat a diet that consists of more carrion from the desert or wetland and swamp areas.

In North America, turkey vultures prefer to nest in remote locations, such as farmlands, rangelands, woods, and the foothills of mountains. Vultures like these do not construct nests; instead, they use preexisting structures, such as ledges, caverns, hollow logs, or even the ground, to raise their young.

As monogamous birds, turkey vultures are known to stay with their partners until one of them dies. It is common knowledge that these couples return to the same nesting locations year after year. 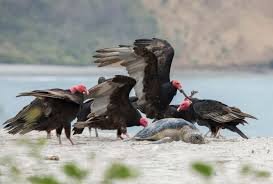 When courting, turkey vultures take to the air, with one bird following the other and emulating its flight pattern. The average clutch size for a turkey vulture is two eggs, but it can range from one to three. Incubation lasts for five weeks, and both parents are responsible for caring for the young.

Both vultures will brood their young and regurgitate food to them once the eggs have hatched. Young birds will take their maiden flight at around 60–80 days of age and then stay with their parents for another 1–3 weeks. About 12 weeks after hatching, the young would venture out from the safety of their parents’ nest.