Owls are nighttime creatures which means they are awake during the night and sleep during the day. Therefore they are known as nocturnal animals. These owls had a very distinct noise and sound which they mostly make in the woodland areas where they reside.

The most common noise that this owl makes is known as hooting. But their sound and noise vary from species of owls and each species has specific noise and a different unique call. They also sound growling, barking and even shrieking sometimes.

Different types of sounds they make 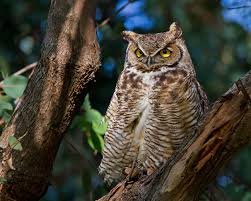 This sound is a most common and recognizable one which is known as ” The sound of Owls”. Great horned owls are the ones who mostly produce hooting sounds and are essentially called the hooting owls of the United States. These sounds include two times ‘hoo, hoo’ and with a deep noise followed by a long stretched sound of ‘hoooooo’. These sounds can be heard from a long distance. Male owls produce deeper hooting sounds than the females. It is very common to hear this sound at dusk and till midnight, especially in the woodlands of parts of America.

Barking is a sound produced by the works especially when they are frightened or surprised. They use a low barking sound to scare off threats or any kind of danger. This noise is given in sharp intervals during the day or at night whenever the owls feel scared. So if you hear the barking sound of an owl, you know now that they are doing this out of being frightened. The sound produced with low and sharp noise is like ‘ woo-woo’. The most generally known bird that produces such sound is an Australian barking owl. This sound is mainly a unique call often given by both males and females as a part of mating or location ritual. 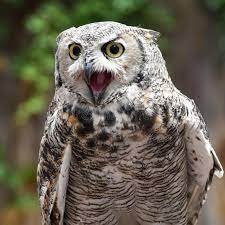 These shriek sounds are mainly produced by the infant owls or the owlets. These sounds are mostly heard at night. The babies followed the same routine as their parents’ nocturnal schedule. The parents always go for a hunt and search for food at night while these infant owls awake at night in a nest. Then these young ones produce this shrieking sound which is a signal for their parents that their owlets are hungry or they are calling their parents back to their babies.

But some species sound exactly like infant shrieks, like barn owls or common sooty owls. Barn owls sound like shrieking but their noise is like a kind of horror movie scream. They use this unique call to scare off the threat.

Screeches are sounds which are generally produced after dusk and before dawn. This sound is made in a high pitched noise while attacking the other animal or scaring off threatening, specially produced by great horned owls. Then there are other species of owls known as barking owls who make this screeching sound at the time of the breeding season. This noise made by these owls is termed a screaming owl as it is similar to a screaming lady. 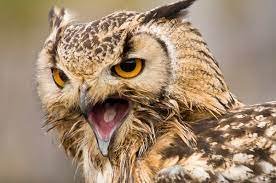 A growling sound is made by owls to dissuade threatening animals or predators. This sound is made in a short low pitched voice from deep in a throat and basically produced by a great horned owl in the woodland. They produce these types of sounds to protect themselves. Barking owls make this growling noise to prevent their nest from any kind of danger and these sounds can be easily heard from a close range.

Thus, owls produced a variety of unique calls according to the situation. Sometimes they whistle, coos and cry. There are different species of owls who produce these noises on a different pitch levels, sometimes deep or might be soft depending on the place and situation they are in. Their different voices are used to protect their territory, call for mates or for infants when they are hungry or desire to call back their parents.