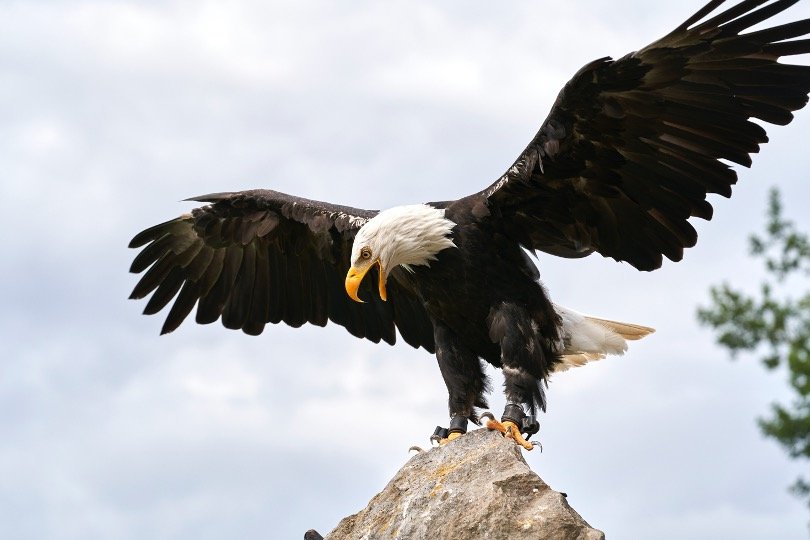 What is a Group of Eagles Called?

Eagles are one of the strongest and most dangerous birds. They are the strongest predators and have a unique style of taking flight. These Eagles sometimes take flight in groups in search of food and to protect themselves from predators.

There are many different species and some of them like to hang out in groups. But have you ever wondered what the group of eagles is known as?

There is a most common term which is defined for the collective noun of eagles which is ‘a convocation of eagles’. They are termed eagles that form a large gathering and then fly somewhere. So convocation is a term that means gatherings in a large number.

What are the other terms for a group of Eagles?

Why is a group of eagles known as a convocation?

The group of eagles is known as convocation because of the dark feathers that the eagles have.

Also, know What do Bald Eagles Eat? All You Need To Know

Why do we say a soar of eagles?

Group of Eagles is termed as soar of eagles are they often spotted soaring through skies.

Why do we say aerie of eagles?

Why the spread of eagles?

A group of eagles is categorized as the spread of eagles as the eagles separated from their group in search of food and while hunting and therefore they all spread around the territory to hunt. Eagles are great predators.

Why do we say colony of eagles?

A group of eagles has been termed a colony of eagles as Eagles form a colony in the area they exist. They live forming a large colony which is why their collective noun has another term.

What do you call a group of baby eagles?

A group of baby eagles is known as Eaglets or they can also be termed nestlings, fledglings of baby eagles, or juveniles. Baby eagles are categorized by the stage of their life and their group is termed according to their life stages and growth.

What about a group of bald eagles?

The bald eagle is big and powerful and its head has white feathers which contrast the color of its body and its wings are a brown hue. This feature of his makes this kind of eagle, bald eagles. They are endangered creatures. They are generally found in areas next to water bodies and areas close to coasts and lakes.

They have sharp black talons which help them to catch their prey. These creatures grow to about 2.5 to 3.5 feet in height and the wingspan is 6 feet which is quite impressive. Females are generally larger than bald eagles.

What is a group of golden eagles called?

Golden Eagles are 6 to 7 feet in height and are very powerful and dangerous. They are also called a flock of golden eagles. They have sharp talons by which they can attack any small animal.

When do Eagles form groups together?

What groups of eagles prey on?

The group of eagles fly together but get separated while hunting for their prey. Eagles have predatory skills and they are dangerous hunters. The general or better say tropical eagles prey on small mammals and birds.

Their hunting skills and their prey depends on different types of eagles. Bald eagles mostly eat fish and other animals like squirrels and rabbits.

Eagles are carnivorous animals and powerful predators and they target these animals for whom they are confident of hunting them without harming themselves. They can feed on varieties of animals like salmon, catfish, crabs, amphibians, and others.

These are the list of food that bald eagles generally eat:

But it has been seen that bald eagles do migrate in groups sometimes as they do so in search of food. Bald eagles migrate generally in the autumn seasons.

Though eagles are said to be aggressive, they all protect each other in groups from the other predators. They together take care of young ones. These powerful creatures hunt for prey that is easily approachable, and they do so by separating from their groups.

A group of eagles are an endangered species and their population is increasing but being in wild ranges they do face a lot of life-threatening problems which cause the reduction in the lifespan of eagles.