Flamingos are pink-colored beautiful birds with long necks and legs. They are the most cordial and social birds. There are a total of six species of flamingos and they all gather together in very large numbers. The group of flamingos is often seen worldwide including Caribbean, Andean, James, Chilean, lesser and greater flamingos. Among them, four types of species of flamingos are found across the United States. The Andean and Chilean flamingos are seen in South America. The greater and lesser species are generally found in Africa and sometimes in the middle east. 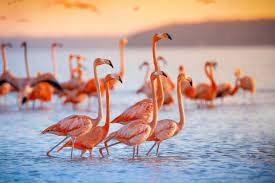 These red and pink colored birds also have long necks and their plumage is white, pink, and crimson. Their color is because of the pigments which are found in their food. The food which these sociable birds intake consists of plankton and aquatic invertebrates. Their pink and red colors are also because of the pigments and that is why their scientific name is Phoenicopterus which means the color red and pink. The other characteristics of these birds are that they are noisy and produce noise from grunting or growling vocalization. Different species of flamingos have different types of vocalization.

So now you might be thinking that what is a group of flamingos called? Here we will discuss the collective term for flamingos and more about them.

Why do Flamingos live in a group?

Flamingoes are elegant and gorgeous-looking birds that are often seen in a large number of groups. These birds feel safe when in a group. They form a group to protect themselves from outside predators like foxes, lions, etc. They are also known as wading birds and they wade in large groups as it helps them in the process of mating and breeding.

What is a group of Flamingos called? 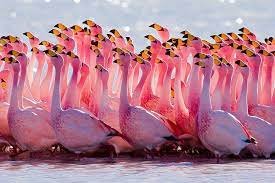 A group of flamingos is commonly known as ‘flamboyance’. This term is a general term for their collective noun. They are also known as

These birds forming a group have different terms and each term has some specific meaning for why they are called so?

Why are they termed with different names? 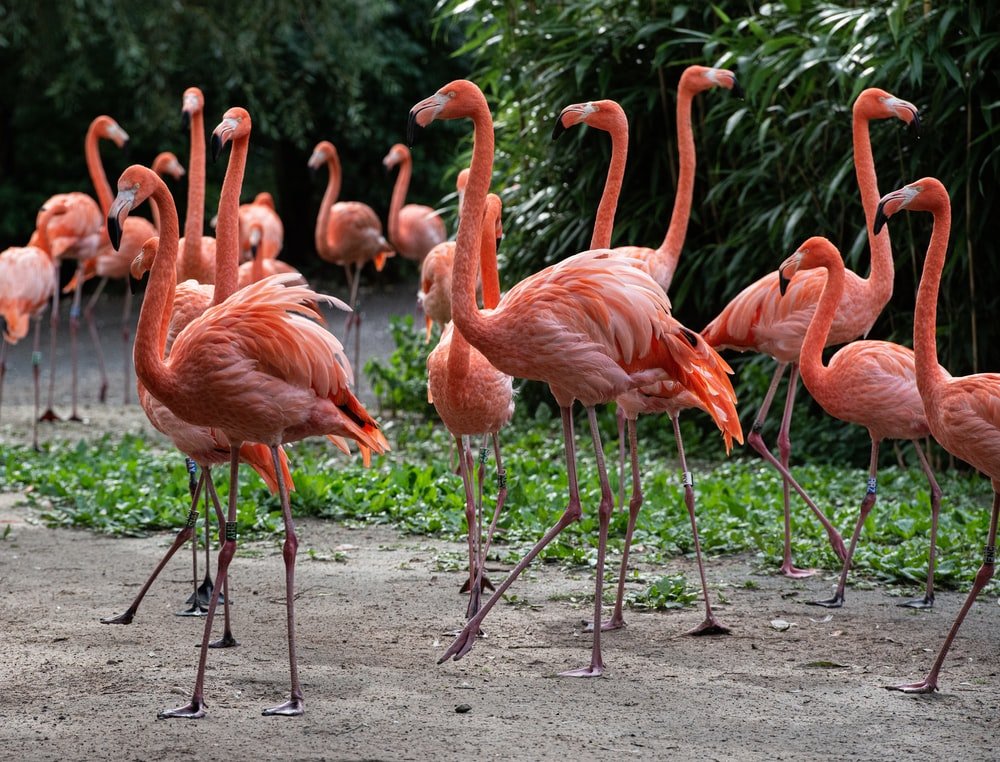 We will start with their basic and common word for the group of flamingos which is ‘A flamboyance of flamingos. This term is well suited to its stunning looks. Their term flamboyance commonly characterizes the word fire. Flamboyance is a French word for the flame-coloured flame’ or ‘flair.’ So whenever these stunning birds are seen in a group it feels like it is a pink-colored fire burning in the distance. And this is why they are termed as that particular word. The group of flamingos is also known as the colony of flamingos because of their habitat’s nature. These birds form a colony of their species as they are the chosen birds which often get rejected by other species as being in an opposing environment, therefore they move into a region and form their colony of species.

This beautiful looking group of birds is also called a regiment of flamingos as these birds form a group like military soldiers and match in time together just similar to well-drilled soldiers. A flurry of flamingos is yet another name for the group of flamingos as these sociable birds group up and take to the aur by running across the surface of the water and taking a flight by flapping their wings to lift off. This stunning scene is what everyone loves to have a sight of. This is why they are termed with that specific name.

These amazing groups of birds can stand motionless for a long period in the same rest positions. It’s always one leg which is an extraordinary look when someone sees them doing it in a group. This is why they have been termed a ‘ stand of flamingos”.A version of flamingos where this particular word originates from the Albanian language which generally means the term ‘ lightning ‘ and sometimes takes a reference with a boy’s name ‘Albeit’ an unusual one. Their other terms like a flock of flamingos or a skein of flamingos is a general terms used when the birds are on a flight.

What is a group of baby flamingos called? 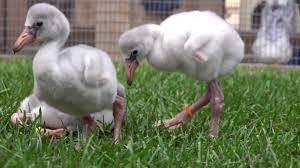 The young flamingoes are commonly known as chicks, juveniles, or hatching. The group of baby flamingos is also known as ‘A creche of flamingos. With their gorgeous appearances baby flamingos, whenever in a group are also termed Flangminglet. These babies, after growing a little, move into groups where they are protected and guarded by a small number of adult flamingoes. These young ones often move into a group during the day and at night they return to their parents.

Why do groups of flamingos stand on one leg?

Flamingoes are often seen standing on one leg and not in an individual but they also do this in groups which is an amazing sight. These gorgeous-looking birds can stand motionless in a stable and conformable position. Not only this, but they can even go on sleeping while standing on one leg. It has been said that there is a connection in the closely packed blood vessels in their parts of the legs. These blood vessels conserve and recapture the body great and that is why flamingoes can conserve hearts naturally. So, these flamingoes can stand on one leg as long as their feet are placed at the right angle.

These beautiful looking birds whenever seen in a group, it’s an amazing sight to have. They generally form groups in huge numbers. These sociable birds do everything together from eating together to sleeping and flying together. Sometimes they even do the mating process together. Flamingoes are not so aggressive but the bright-colored ones are a little aggressive, especially against other animals whom they dislike. Therefore, these birds form a group and act together.