Maryland’s official state bird is the Baltimore Oriole (Icteridae family). The undersides and shoulders of male Baltimore Orioles are a brilliant golden-orange, while their black wings and blackheads set them apart. The females are less vibrantly colored than the males, with a yellowish-orange underside and a more subdued black on the head and wings. From 7 to 8.5 inches (17.78 to 20.32 cm) in length, approximately.

The Baltimore Oriole was named after Maryland’s patron saint, Lord Baltimore, by the state’s founding father, George Calvert. The coat of arms of a nobleman from the 17th century was based on the hues of the oriole. In the Central Plains, the Bullock Oriole and the more widespread Baltimore Oriole can be found breeding together because of their genetic similarities. As the study into the link between the two species continues, the American Ornithologists Union decided to rename both birds Northern Orioles. 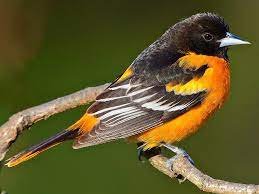 The natural habitat of Baltimore Orioles is a forest with deciduous trees. They subsist primarily on insects, with occasional fruit or berry additions. They eat caterpillars like candy, which could help keep the woodlands free of those pesky insects. If you want to attract this bird to your feeder, try using oranges, nectars, or peanut butter.
Maryland has the 18th highest population density and the ninth lowest land area in the United States. Maryland’s varied topography includes both mountainous and flat regions, as well as oak woods and sand dunes.

In 1947, the Baltimore oriole (Icterus galbula) was officially recognised as Maryland’s state bird. Nongame and Endangered Species Conservation Act of 1975 added the bird to Maryland’s list of protected species. In spite of these two pieces of legislation, the bird’s survival has been in jeopardy ever since the 1980s.

Why Are the Orioles Chosen as Maryland’s State Bird? 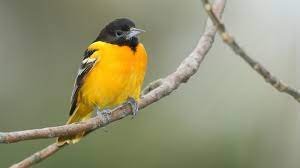 As a species, Orioles are easily identified by their black and orange plumage. The heraldic colour of the Baltimore family in Maryland is very close to these two colours. That’s why locals often refer to them as the “Baltimore Orioles.” Orioles are among the most stunning bird species. They’re the cute, cuddly kind you wish you could bring home and keep as a pet. Among the many things that set them apart is the vivid hues of their feathers.

What year did Maryland make the Baltimore Oriole its official state bird?

In 1954, lawmakers in Maryland, sometimes known as the Old Line State, designated the Baltimore oriole as the official state bird. Chapter 54 of the Acts of 1947 includes the bird’s official name in Article 7-301 of the Code of Provisions. The Maryland state bird is unique among the 50 states.

What does the state bird of Maryland look like? 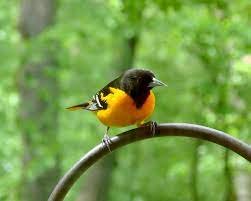 The brilliant gold-orange and black colour of the Baltimore oriole sets it apart from all other birds. In contrast to the females and young birds, males’ heads are completely black. Unlike males, females have two white wing bars.
The average adult length for both sexes is between six and eight inches. Weights for these birds are typically between.06 and.08 pounds. Their wing span is around 9–12 inches. 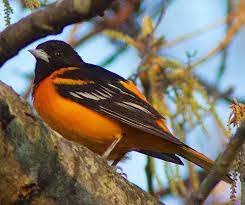 The male Baltimore oriole creates a territory and then courtesy the females there by singing and chatting. At this stage, he demonstrates his agility and prowess by leaping from one perch to another. Similarly, you may notice that the males of this species adopt a bowing stance. This is a sign of respect for the lady.

The Baltimore oriole is a very territorial bird that will defend its area even before it has mated. The female then selects a suitable location inside the community he selected to start a family. She chooses a crook in a tree’s limbs as the perfect spot to construct the nest. American elms are the tree of choice for this species, but they may use other trees if necessary. Cottonwoods and maples are two other options. The nest looks like a sock and usually hangs from the branches.

Grass blades, grapevine bark, twine, fishing line, and other materials are woven and stitched together by the bird. Ingeniously, this bird flies back and forth with its material, looping it through other materials and eventually tying knots in the fabric. Her pattern resembles two bowls. The inside bowl is bag-shaped, the outer bowl is made of flexible fibres, and the lining inside both bowls is plush.

They, too, are nomadic birds. Beginning in Louisiana and moving north through the central United States and into central Canada, they arrive in the region in early April and stay until late May, where they breed. They may begin their southward migration in late July, depending on how far north they migrated. Florida, the Caribbean, Central America, and even the northernmost parts of South America are where they spend the winter.

What do Baltimore Orioles eat? 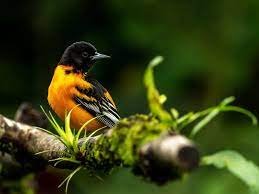 Orioles from Baltimore mostly eat insects, with a focus on those with high-fat content so that they can use that energy during their long journeys. In order to fuel their migration, these birds must store the fats and sugars that they consume. They eat a wider variety of foods than most other birds since they roam so much. Many different kinds of insects, fruit, and nectar make up their diet. They have a particular fondness for ripe, dark-hued fruits like red cherries, mulberries, purple grapes, etc.
As well as catching insects in flight, these birds hunt for them in nearby bushes and trees. Orioles love to eat caterpillars, especially the hairy varieties common in the southern spring. Bugs, beetles, wasps, grasshoppers, bugs, snails, and spiders are other favorites. However, before you assume that these vibrant birds solely care about protein, you should know that they have a few strategies up their wings to take advantage of the delicious bigger fruits they find on their trip to their winter homes.
Not that it matters that many of this bird’s preferred foods are far larger than it is. In the same way that female birds use their beaks to weave a nest, both sexes use their heads and beaks in novel ways. By pecking a hole in a larger fruit and sucking the liquid out with their tongues, they engage in a practice known as gaping.