What makes the Northern mockingbird the Texas state bird?

Texas valued the fidelity of its state bird because it remained constant throughout its tremendously scorching summers and bitterly frigid winters. The Northern Mockingbird did not move south during the winter, nor does it today. It resides year-round in Texas. The statute designating it as the state bird, Senate Concurrent Resolution No. 8 of the 40th Legislature, emphasizes that the bird is territorial “like any genuine Texan.” 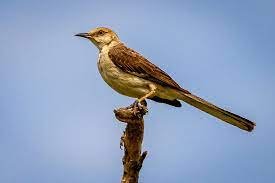 The Northern Mockingbird has the exceptional vocal ability; it may sing up to 200 songs, including the songs of other birds, insect and amphibian sounds, and even the occasional mechanical noise. The northern mockingbird is also the state bird of Mississippi, Florida, Arkansas, and Tennessee.

Today, the mockingbird is an integral part of Texas’s heritage, and its tunes may be heard from Dallas to the west Texas mountains. Texans concur that the mockingbird has the most beautiful song of any North American bird. Scientifically known as Mimus polyglottos, which translates to “many-tongued mimic” in Latin, the Mockingbird’s song is a mixture of the sounds of numerous other birds. Each imitation is repeated twice or thrice, and then the next song is played in rapid succession.

The mockingbird is capable of imitating the calls and chirps of 35 distinct bird species, as well as sirens and crickets. According to scientists, male mockingbirds develop these songs to impress possible mates. The majority of mockingbird couples are monogamous for life and continue to reproduce and construct nests of twigs, branches, grass, and leaves year after year.

Also, know about the State bird of New Jersey

Is it unlawful in Texas to own a Mockingbird? 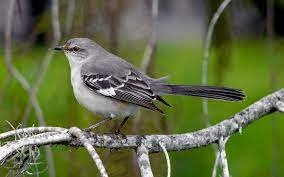 Unfortunately, the Mockingbird’s exquisite songs nearly contributed to its extinction in the 19th century, when its population collapsed as a result of people catching the bird to keep as a pet. In 1828, Mockingbirds were sold for as high as $50 in big cities such as Philadelphia, St. Louis, and New York, which is equivalent to $1300 when adjusted for inflation.

While everyone would love to hear the bird’s wonderful songs every day, keeping it as a pet could endanger the species’ future. According to the North American Breeding Bird Survey, the population of Northern Mockingbirds has decreased by around 21 percent between 1966 and 2015. Mockingbird populations are still abundant and have progressively rebounded in some regions despite these declines.

When did the Northern Mockingbird become Texas’ official state bird?

People within the state observed the bird in its preferred open habitats. Texas, the second-largest U.S. state by land and population, became a state on December 29, 1845, but it did not establish official symbols until 1861. The mockingbird is also the state bird of Arkansas, Florida, Mississippi, and Tennessee. 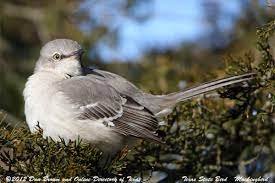 Males of the northern mockingbird are just slightly larger than females. Otherwise, the two sexes of the bird are physically identical. The chest and upper portion of the bird look to be grey, while its stomach appears white or light grey. These birds often possess a black bill with a brown base.

The Northern mockingbird measures eight to eleven inches from head to tail. Its wing span varies between 12 and 15 inches. The weight of these small birds ranges from 1.4 to 2.0 ounces.

What behavior do Mockingbirds exhibit?

Mockingbirds get their name from their ability to imitate songs. A mockingbird is able to imitate different birdcalls. These gifted beings are also capable of composing music. The average mockingbird knows more than 200 tunes, some from other species and others of its own creation. They do not just mimic the songs of other species. They can also comprehend human music, such as piano, other animals, such as dogs, and urban sounds, such as gates and sirens. The birds will hear these objects and experiment with them, often repeating the sound three times rapidly to create a unique symphony. These birds are as creative as Mozart or Bach, disproving the conventional adage that bird brains equate to stupidity.

While most people associate birds with singing in the morning, the mockingbird follows a schedule akin to a Sixth Street performer in Austin. Overnight, the mockingbird will sing. Its preferred moonlit midnight performances occur in the springtime.

What do mockingbirds eat? 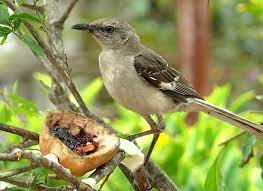 Most species of mockingbirds exhibit seasonal fluctuation in their diet, with many taking advantage of the insect-rich breeding season. Mockingbirds forage on the ground, in trees, and in bushes, and many are particularly adept at aerial insect hunting (whilst flying). Mockingbirds consume insects, fruits, and seeds in their diet. They are categorized as omnivores since they consume both plants and animals. These birds are constantly foraging, sometimes even during the night.