In terms of population, Utah is at number 30, while in terms of land area, it ranks at number 13. Utah is home to a wide variety of wildlife because of its varied topography.

What is the State Bird of Utah? 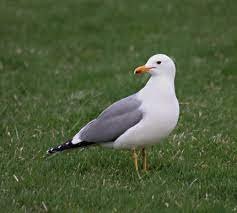 The Californian gull is the only bird represented among Utah’s 26 official (and 3 unofficial) symbols. The California seagull was officially named Utah’s state bird in 1955. Whether by the lake or in a grassy yard or park, the pristine white bird with grey wings and a black tale provides a majestic spectacle. The bird appears polished and well-dressed in its feathery Sunday best.

Unlike many other gull species, the California Gull can be found breeding inland from Southern California all the way to Canada, and to the east all the way to New Mexico, Colorado, Nebraska, and the Dakotas.
According to estimates, most California Gulls (80%) had their nests around Utah’s Great Salt Lake prior to the 1930s. Breeding colonies have since been set up on artificial reservoirs throughout the West. New gull colonies tend to pop up in close proximity to major urban centers, likely because it is where the birds can find the best selection of rubbish.

Why is the California Gull the state bird for Utah? 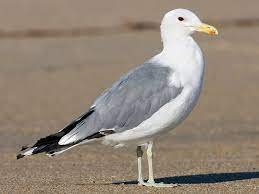 The common California gull was the state’s savior in 1848. It was the year the Rocky Mountain crickets entered the state in droves. In a time when food had to be transported by rail car or horseback, the crickets began devouring all the crops grown by Utah farmers, so eliminating that state’s primary source of sustenance. The gull saved the state from the insects by swooping in and feasting on them. With the bugs eaten, the remaining crops and the state’s food supply were saved. Utah was very appreciative, however, they were tardy in their thank you notes. 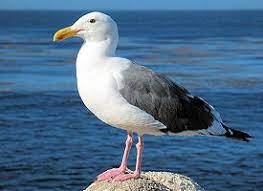 It belongs to the family Laridae and goes by the Latin name Laruscalifornicus. It is smaller than its close relative the herring gull but larger than the ring-billed gull, hence it is classified as a medium-sized gull. Yet, this is not always the case; the California gull frequently shares physical traits with his larger relatives.
To put it simply, California gulls are stunning creatures. Although it resembles the herring gull, the California gull has a more rounded head, shorter yellow legs, a yellow beak with a black ring, and brown eyes. 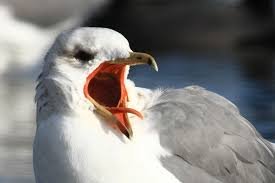 The agile California gull feeds both at sea and on land, frequenting the margins of lakes and oceans. Deftly diving into the water and snatching their food midair, these birds are renowned for their strength. This gull will forage or fight while on foot; it is not one to avoid conflict.
These seabirds prefer to raise their young on uninhabited, treeless islands. Levees, inland lakes, and rivers are preferred by them. They don’t go out and find food like other birds. These birds, rather than foraging in scrub lands or pastures, typically check out parking lots and garbage dumps. They saved a state from famine in the 1800s by foraging orchards and fields. Breeding populations in the Great Basin region of the western United States tend to produce smaller, darker birds than their Great Plains counterparts. 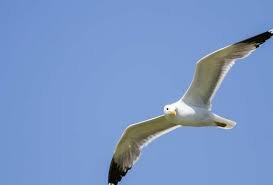 A migratory species, California gulls go to the coast in search of warmer temperatures during the winter months. They are only seen in their country of origin during the winter months.
The marshy areas are their breeding and nesting grounds. During the breeding season, you can spot them in the eastern regions of California and Colorado, as well as the western regions of North America and the Canadian Northwest Territories. They live in large colonies where many species of birds nest together.
They dig holes in the ground and line them with feathers, grass, and other plant material to create their nests. Two or three eggs are laid by the females, and the best part is that the young are nourished and cared for by both parents. Just picture it: a proud and responsible parent pair of gulls tending to their young. What do you think? The California gulls can pick up objects while flying as readily as they can when walking or swimming, demonstrating their mastery as foragers. They forage through trash heaps near the harbor, but prefer prey they have to hunt for themselves, such as insects, small fish, and eggs.

In order to feast on the worms and other insects uncovered by the plows, they have been observed landing in the dust left behind. As a result, they are often regarded as helpful for farming. In demonstrating this theory, they earned the right to be called Utah’s official state bird.

Do colonies of California gulls exist?

The California gulf is a colonial nester that occasionally shares its nest with other species of bird. Nests consist of sticks, rubbish, dry plants, and feathers, and are constructed in small depressions in the ground. They extend all the way to the middle states of the United States from Canada.

Diet of the California gull 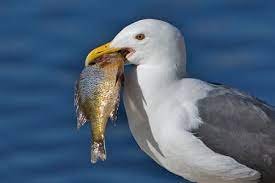 Marine fare is a favorite of California gulls. Perhaps not surprisingly given their origins, these gulls are avid anglers. The Utah lakes are used in the same way as the Pacific Ocean: as a target for dive bombing. When these birds migrate to the Golden State, they feast on whole fish and other delicacies. They have been seen feasting on the carcasses of animals washed up on Utah’s lakeshores. Berries, cereal, and insects are also part of their diet. Their diet also includes slugs and earthworms. These birds’ favorite food while they’re near the ocean is crabs. They will also consume manure, reptiles, and small mammals if they have to. Due to their long lifespan and need to eat whatever they can find, these birds will eat almost anything that doesn’t exceed the size of their beaks.