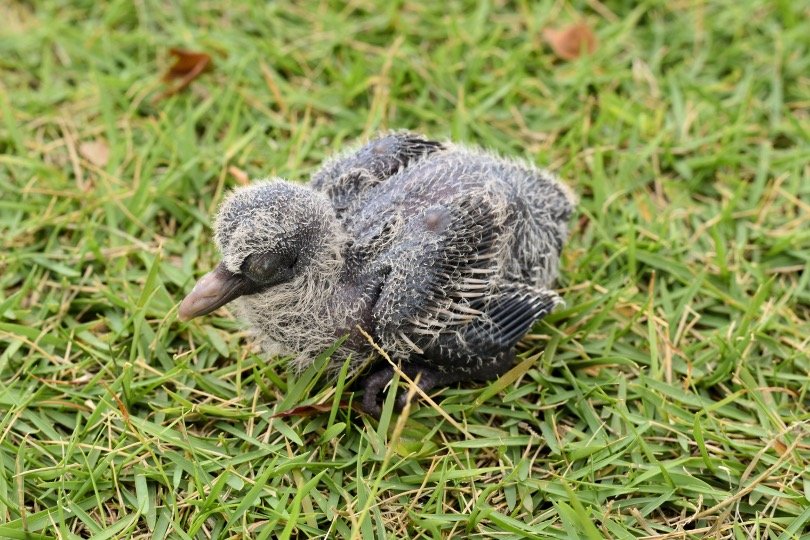 Pigeons are almost wherever we go. Feral pigeons and wood pigeons are abundant in towns and cities. Yet nothing is documented about what their offspring look like.

How does a newborn pigeon look?

Pigeons with newly hatched skin have pink or black skin with a small and patchy layer of yellow that will later turn into feathers – this can occasionally be white. The beak, wings, and feet are significantly larger in comparison to the body; nevertheless, they develop into these traits as they grow larger.

The beak is generally pinkish, although it can occasionally be darker. Slate grey is the color of the foot.

Your young pigeon’s colors will gradually change as it grows until it matches the adult pigeons you’re used to seeing. By the time a newborn pigeon is a few weeks old, it will have feathers and will be changing colors.

Why aren’t there any baby pigeons?

The young pigeons remain in the nests until they are old enough to fly. Pigeons build their nests distant from cities. As a result, we don’t observe any baby pigeons.

When do pigeons hatch?

Pigeons normally reproduce all year, so embryos can hatch at any time. The majority of young pigeons hatch in the spring and early summer, between May and June and August and November, respectively.

What do newborn pigeons weigh?

A newly born pigeon weighs around 15 grams on average, however, this might vary substantially. A young pigeon will weigh 18 times its birth weight when it is a month old.

What do baby pigeons consume?

For the first week and a half of their lives, baby pigeons eat a relatively basic diet. The squeakers rely only on their mothers and fathers to swallow crop milk for them until approximately day 5 when they will begin to include seeds into their milk diet.

Around a week and a half in, they begin to get food from their parents that they will generally consume as adults, such as seeds, insects, and fruits. Crop milk, often known as pigeon milk, is a secretion from the crop lining (a ‘compartment’ where pigeons can keep food before digestion). It also contains a lot of fat and protein.

When do baby pigeons eat on their own?

After four days, newborn pigeons will claw at their parents to acquire meals and be fed. Young birds will persistently beg and scream for food for roughly 7 days when they will normally eat twice a day.

Where do baby pigeons live?

Baby pigeons are unable to fly properly, if at all. As a result, after hatching, they are confined to their family nest for 25-35 days in the summer and up to 45 days in the winter.

These nests may be found practically anyplace there is a place for the nest to perch on provided it is dry. Some pigeons may even build a new nest on top of an existing one, resulting in nests which is several feet in length.

What do you call young pigeons?

Baby pigeons are referred to as squabs or squeakers. Until they reach the age of a month, these newborns are officially only squabs. A flock is a bunch of pigeons.

When are newborn pigeons able to fly? 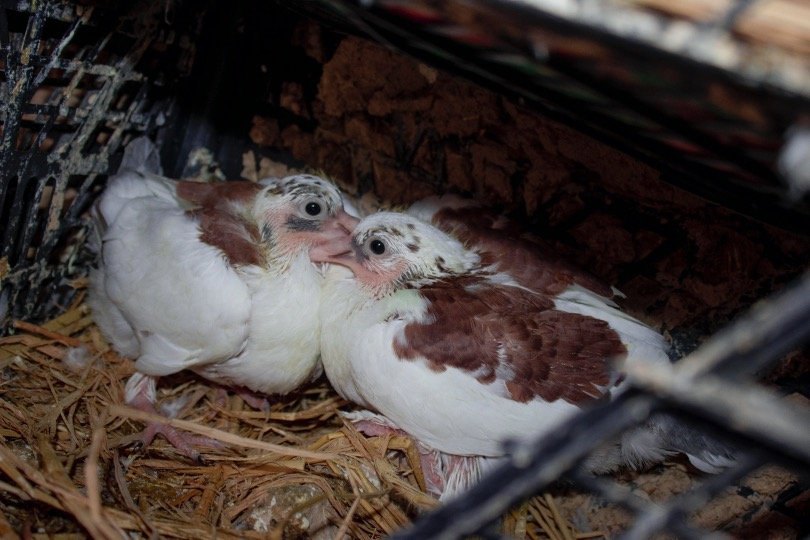 Baby pigeons are usually capable of flight at roughly 6 weeks of age. However, after around 4 weeks, they will begin to flap their wings to practice and learn. During this time, you may frequently witness them taking off and landing with minor elevations from the ground.

Determining the age of a baby pigeon

Baby pigeon age might be difficult to calculate, but there are a few methods for getting a decent approximation. Most newborn pigeons fledge at around 16 weeks of age.

The dimensions of the nest and the variety of nesting material used to build it, on the other hand, can affect how long a young pigeon stays in its nest. This suggests that the average length of time a young pigeon spends in a nest is between 14 and 18 weeks.

Many species in the animal realm are nurtured solely by their mothers, but the newborn pigeon is not one of them. Unlike many other animals, male and female pigeons will alternate incubating their young as they await hatching.

A pigeon couple commits to more than just raising their young. When two mature pigeons mate, they commit to one other for life.

Throughout their lives, the pigeons collaborate to defend their young from predators by producing quiet coos when danger is around. If there is a hazard nearby, the parents will divert the predator from their offspring.

A variety of factors demonstrate the newborn pigeon’s intelligence. The ability to pass the “mirror test” is one of the most important of these. The mirror test is a self-awareness test in which the animal is placed in front of a mirror.

The test is passed if the animal recognizes the sight in front of them as its reflection. Animals that believe they are seeing another animal, on the other hand, fail the test.

Baby Pigeons Are Born With GPS

With the introduction of cellphones and the internet, the employment of carrier pigeons for travel became outdated, but their influence on communication had a massive impact on the world as we understand it today.

Squeakers have exceptional hearing and vision

When a young pigeon is between 4 and 5 days old, its eyes open. Baby pigeons are also unusual in that they can detect volcanic activity and impending storms.