Owls are mysterious birds that can be very dangerous for other animals and pets but sometimes for human beings too. The owls don’t attack humans generally but when they do it can be deadly as they are furnished with sharp and pointed talons that are strong enough to cause serious injuries and can lead to death too. Owls are most hostile when their territory is threatened or when it comes to protecting young ones and families.

They are vicious birds, and there have been numerous reports where owls injured humans, especially those who go in rural areas such as hikers, passers-by, and pets without being previously provoked. They have powerful talons which they use to overcome great pressure and pick up heavy prey. They might do so to make the pets their prey and feed on them because they are carnivorous birds who commonly feed on other small animals.

Why Do Owls Attack Humans? 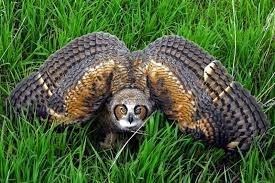 They are clever and noiseless flying birds. They are so still and fast that it makes it even more difficult to notice them. Their speed is great and can close in on their prey which may even be bigger than they are. They can spot the prey from more than a mile away, in addition to their neck rotation of almost 360 degrees which is one of their specialties.

Owls would never attack humans. They are vigilant at different times to us and their suitable territory isn’t an urban or populated one. They hunt in total silence and thus, rural areas are the most common place, so any place humans are moving around, driving, or camping isn’t where an owl wants to be but in silent areas it’s very important to be careful and go with precautions.

Still, sometimes attacking humans isn’t for a reason and they can attack depending on their behavior and situations. For example, a hungry owl finds itself in a town and gets confused by all the loud noises and bright lights. They can easily deal with any wild animal as a hungry animal is more dangerous than anything.  And as we know – wild animals in the wrong place at the wrong time either run away or panic!

But the most common reason for an owl to attack a human is when the human tries to get close to them whether on purpose or accidentally. When some humans try to approach them, owls become serious and they feel as if humans are attacking them and this is why owls attack humans as a means of defending themselves.

Owls will actively attack anything or anyone who approaches their nest and who they believe to be a threat. Who can blame them? However, as owls tend to attack the head and face of a would-be attacker – these humans can come off severely injured.

What type of owl attacks humans? 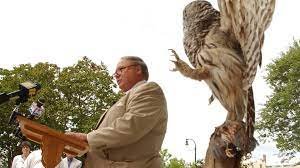 One with a nest of babies that the human got too close to. Owls are pretty laid-back, otherwise. Many owls, even quite small ones, will attack a human if you get too close to their nest. They all have sharp talons, by the way.

There could be several reasons for this –

First of all, let me emphasize that no owl preys upon human beings. Or goes out of its way to attack them – there is always a reason. Reasons could be many ways like if The owls have a nest nearby and they feel some kind of danger and to defend and protect them.

Secondly – The owls have fledgling nestlings nearby and are defending them. Or another reason could be that if The owl has been brought up with and around humans and views them as potential ‘friends ‘ – so they try to be with the ‘Friendly people ‘ who often construe their advances as an attack. – – This is exceptionally rare.

Any owl or large raptor will defend the nest or chicks from a perceived attacker – so it’s advised to get away from such an area as swiftly as possible – in the case of owls you will not hear nor probably see them and both adults will drop out of the sky to defend the nest or chicks. You would defend your home against an intruder – the owls are doing the same thing.

How do you prevent owls from attacking?

Owls generally don’t attack humans like that unless they feel any kind of danger from humans and if they attack for some reason, you could defend yourself from their deadly attack if you know how to do it. Stopping an owl attack can be tricky because it usually happens so fast. You may not hear or see it coming, and the owl will probably be flying away before you know what has hit you. 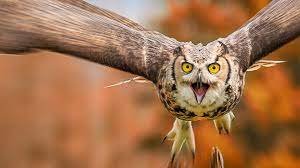 Whenever you go to rural areas or in silent places you have to pay attention. Listen closely to the sound of owls hooting, and watch for owls staring at you from the trees. If you feel it is dangerous just Move away from the area if you see or hear anything that makes you feel threatened or uncomfortable.

While hiking Wearing a bike helmet or even a simple ball cap can protect your head from an owl’s sharp and powerful talons. Alternatively, you can carry an umbrella to shield yourself from any potential attacks. This could be an option but a helmet is the most prominent one to protect your head.

If you are attacked by an owl, don’t stand still and take it. Jump around, waving your arms and making as much noise as possible to try and scare the owl away.

Once an eagle has attacked you, there’s a pretty good chance you’ve crossed over into its territory. To prevent further attacks, leave the area immediately and head for areas with more people, as the owl is unlikely to follow you there.

It is an exceptional situation for owls to track humans as Very few of them will attack a human; if one does, it’s generally either one that was an “attempted pet” and is addressed on humans or the ones who are hungry or mad of all loud noises in the ten around them or the large owls that are defending a nearby nest.

An owl met by a human will generally try to escape. If it cannot escape it will generally either threaten or try to appear unobtrusive to blend into the landscape. So next time you approach any owls just remember not to get too close or if you see any owls flying around your yard it’s better to stay in.