Owls are the ultimate nighttime creatures. There are about 200 different species of owls around the globe. There are two families of owls: Tytonidae (Barn Owls) and Strigidae, which contains all other species. Both families of owls have acquired exceptional hunting abilities that allow them to capture prey with stealth and precision. An encounter with an owl is an extraordinary event. Whether it is a ghostly barn owl gliding over a farming landscape or a brief glimpse of a tawny atop a fence post, you will never forget witnessing an owl. These graceful creatures of dawn, dusk, and night have long captured our interest. It’s no surprise that they are such skilled hunters, given their formidable talons, astounding eyesight, and incredible hearing. 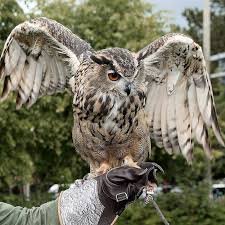 All Owls possess specialized traits that make them effective predators. Their keen eyesight enables them to locate prey even during the darkest of nights. Hearing that is sensitive and directed aids in locating hidden prey. Some species may even successfully hunt in complete darkness using only sound as a guide. The flight of an owl is muted by unique wing feathers that muffle the sound of air passing across the wing’s surface. This allows Owls to hunt stealthily and catch their prey off guard. It also enables the Owl to detect prey movement while in flight.

The majority of species hunt from low branches, stumps, or fence posts. They will wait for prey to appear before swooping down with open wings and extended talons. Some species will fly or glide a short distance before landing on their prey. In certain instances, the Owl may just drop on the target and spread its wings at the last second.

What do Owls consume? 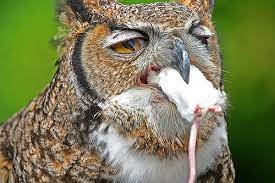 Due to its adaptability to locally available food sources, an owl’s diet can be quite varied. Different owl species hunt in distinct areas and have distinct food needs. Others will hunt in lowland farmland, while others will hunt in upland moorland. Small animals such as mice, voles, and shrews remain a staple in the diets of the vast majority of owls.

Owls are among the most intriguing and mysterious birds in the world. The majority of owl species hunt at night, so few of us are aware of their prey. The first animals that come to mind when we consider what owls eat are rats and mice, but many birdwatchers may be shocked to find that owls also graze on other birds.

When possible, the majority of American owls will feed on other birds. Birds are an essential part of the diets of some owl species, such as the great horned owl and the screech owl. For others, bird hunting is less frequent. Owls hunt other birds in a variety of methods, with roosting, incubating, and brooding birds being the most vulnerable. 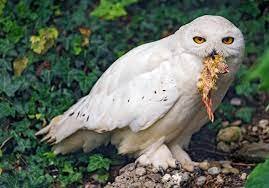 Because owls are birds of prey, they must murder other creatures to survive. Invertebrates (including insects, spiders, earthworms, snails, and crabs), fish, reptiles, amphibians, birds, and small mammals make up their diet.

The primary food source for Owls is very dependent on the species. For instance, Scops and Screech Owls primarily consume insects, but Barn Owls consume mice, shrews, and voles. Eagle Owls and other larger owls hunt on hares, young foxes, and birds as large as ducks and game birds. Some species, such as the Asian Fish Owls (Ketupa) and African Fishing Owls, have specialised on fishing (Scotopelia). Although certain owl species have dietary preferences, the majority of owls are opportunistic and will take advantage of whatever prey is available.

Numerous characteristics make owls good predators of other bird species. Owls can easily discover and attack other birds due to their excellent night vision and hearing, as well as their ability to fly in complete silence. The strong talons and bills of owls allow them to swiftly kill their prey after they have captured it.

Which birds do owls eat? 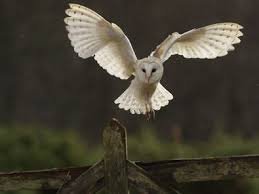 The owl is a carnivore, which means it hunts and consumes other creatures. The type of prey they consume depends on the species and size of the owl. Some owls specialize in particular prey items, but others will hunt any creature they can capture and subdue. Owls consume a vast array of bird species ranging in size from little finches to large birds such as geese and even other owls. Unfortunately, huge owls will occasionally feast on chickens and other domestic fowl, despite this not being their regular diet. The great horned owl is one of North America’s largest owl species. The following bird species have been documented as part of the diet of the great horned owl: Waterbirds such as ducks, grebes, and coots, the great blue heron, and smaller kinds of owls, as well as prairie and peregrine falcons. The barn owl’s prey range is lower than that of the great horned owl, yet it still feeds on a variety of smaller animals and birds. These are the bird species they hunt most frequently: Blackbirds with red wings and yellow heads, Pigeons, Rails, Kingfishers, and Woodpeckers.

The eastern screech-owl is a tiny owl native to North America that feeds on a range of other species. These owls are capable of consuming very large food and have even been observed eating members of their own species. At least 83 species of birds are known to be consumed by eastern screech owls, including flycatchers, swallows, mockingbirds, and waxwings. Another opportunistic species, the snowy owl frequently feeds on other birds. Throughout the mating season, these huge owls tend to specialize in mammals such as voles and lemmings, but during the winter, birds become more essential. The food of the snowy owl includes a range of other bird species, including Canada geese, Eider ducks, Red phalaropes, and the Great blue heron.

Why do owls eat birds? 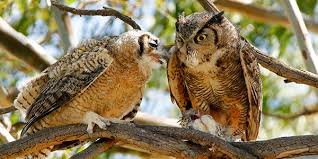 Owls are carnivorous, meaning they must consume other animals in order to exist. The majority of owls are opportunistic hunters that pursue the easiest accessible prey, however, some species have a more specialized diet. Birds are not the most essential food source for the majority of owls, but they will pursue them when possible. The majority of birds are diurnal, rendering them susceptible to experienced night predators such as owls.