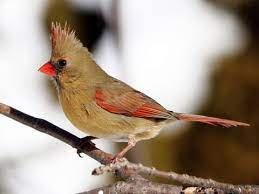 Female cardinals tend to be olive, grey, or brown in color. Although not as bright as the males, the outer upper wings of females are still reddish-orange. The breast and throats of these birds are nearly white in color, while the back and wings are a darker shade.

In addition to the red on their beaks, some female cardinals have a ring of red feathers around their eyes. Although female and male cardinals look similar, the female’s facemask is typically less pronounced and sheathes a softer, greyer color.

As adults, males and females are easily distinguished by their respective colors: Males have bright red plumage in contrast to the more subdued appearance of females. (The Northern Cardinal’s name comes from the fact that the color red conjured images of a Catholic cardinal’s robes to the minds of early European settlers.) The average female is slightly smaller than the average male. 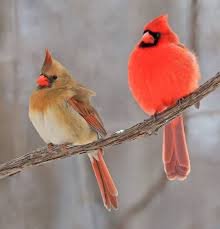 Female cardinals vary in appearance and behavior from their male counterparts in a few key ways:

Female Northern, Vermilion, and Desert cardinals have distinctively different plumage from males. Although males are nearly entirely red, with the exception of a black face mask and somewhat less vibrant upper wings, females tend to be a more subdued brownish-grey, sometimes even with a touch of green.

Their color is a mix of brown, green, and grey, and is sometimes called olive. Males have nearly entirely red underwings, while females are orange and red. Females retain the bright orange color of the male’s upper wings and tail, but their coloring is much more subdued. 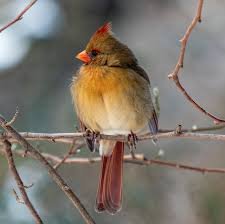 Male and female Pyrrhuloxia (Desert cardinal) are visually distinguishable from one another less dramatically. In contrast to the predominantly red plumage of the Northern and Vermilion cardinals, the Desert cardinal’s red feathers are limited to small patches on its sides.

For females, the red plumage is almost completely replaced by a rosy color. Male and female Desert cardinals look very similar overall; a bird’s lack of red feathers is not sufficient evidence that it is a female.

Both male and female cardinals have reddish-colored bills. The bills of the Vermilion cardinal, Northern cardinal, and Desert cardinal are various shades of grey-blue, red-orange, and yellow.

The red crest of a female cardinal is similar to that of a male’s, though it is typically less prominent and has a grey base. 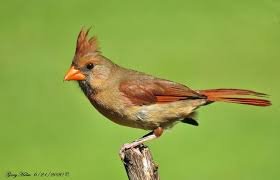 Female cardinals are more diminutive and lighter in weight than their male counterparts: 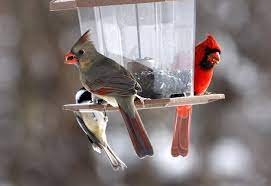 Northern cardinals get up to 90% of their daily calories from weed seeds, grains, and fruits. This animal is a ground feeder that forages amongst shrubbery and trees. It also eats snails and a variety of insects, such as beetles, cicadas, and grasshoppers, and uses the insects almost exclusively to nourish its young. Other examples of commensalism include the consumption of corn (maize) and oats, sunflower seeds, elm tree blossoms and bark, and maple sap derived from holes drilled by sapsuckers.

Also, know What is the State Bird of Missouri?

Cardinal parents choose and protect nesting areas jointly. During courtship, they perform elaborate displays for one another, including twisting, swaying, and puffing out their chests. Females build the nest and tend to the eggs, but males play a role in selecting the site.

The male cardinal provides food for the female during courtship and again while she is incubating her eggs. The female cardinal opens her beak and flutters her wings like a baby bird begging for food. 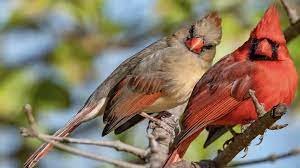 Male and female cardinals are both extremely possessive of their territory. During the colder months, when they aren’t breeding, some cardinals are gregarious and join peaceful flocks. A change in temperament occurs during the breeding season when cardinals leave the flock to set up territories with their mates.

Male cardinals are more likely to engage in aggressive behavior during the breeding season, whether toward other male cardinals, other birds, or female cardinals themselves. When establishing dominance over a female-dominated territory, their song is more aggressive and louder than the females’.

As with most species of birds, male cardinals perform courtship rituals to attract females. From as early as January on in some US states, males will sing to females as a means of courtship. Males do perform a brief and uncomplicated courtship dance that consists primarily of abdominal twists and chest puffs. 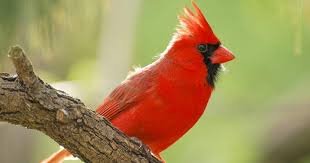 Northern cardinals, both male and female, have a large and widely varying repertoire of songs that are influenced by their geographic location. It’s possible that a cardinal that flies hundreds of miles away from its usual breeding grounds wouldn’t even recognize the songs of other cardinals.

The northern cardinal is the state bird of seven different states in the United States, more than any other species. These states are Illinois, Indiana, Kentucky, North Carolina, Ohio, Virginia, and West Virginia. It was a close second to the Delaware Blue Hen in the state of Delaware’s vote for a state bird.