Since 1927, the Eastern bluebird has been recognized as Missouri’s official state bird. The bluebird is a symbol of joy and good fortune. The male of this species of songbird is easily identifiable by the brilliant blue feathers that cover its wings, tail, back, and head. In Missouri, bluebirds are seasonal visitors, appearing in large numbers between early spring and late fall.

However, in the state’s southern regions, bluebirds are considered permanent residents, so you might be able to spot one at any time of the year. Many people in Missouri put up bluebird houses in the spring and summer so that the birds can nest on their property. Because of its patriotic colours, this bird has long been used to represent the United States. 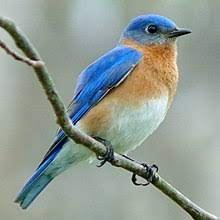 The Eastern bluebird is a small thrush of the songbird family, distinguished by its bright blue wings and tail, reddish-orange chest, and short black bill (the female is a drab gray-blue with a duller reddish chest, and juveniles have a spotted chest and back). The bluebird sings a rich, warbling whistle that is often shattered into short phrases or dry chatter.

Also, know How many species of owls are there?

An open habitat with low levels of ground cover is ideal for eastern bluebirds (such as orchards, parks, and large lawns). The eastern bluebird eats mostly insects, but also some berries and other small fruits. There is usually more than one successful brood of eastern bluebirds each year, and their nests can be found in tree cavities, snags, and nest boxes. Young birds that hatched in later nests tend to stick with their parents through the colder months of the year.

The average adult Eastern bluebird is about six to seven inches long (measured from the tip of its beak to the end of its tail). Its upper body is covered in light blue, glossy plumage, while the cinnamon red of its breast downy changes to a rusty brown in the fall. While the female’s upper body feathers take on a leaden hue, her neck and sides appear a brighter yellow-brown. The females have duller coloring here than the males do. The organs in their stomach are completely white. Both its bill and feet are dark in color. 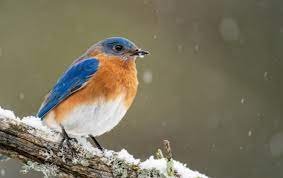 Bluebird wingspan is 10 inches. Like most songbirds, the weight range for these birds is between 0.84 and 1.09 ounces. Between early spring and late fall, Missouri is home to the eastern bluebird. It prefers open areas such as meadows, fields, and large yards for nesting in the countryside.

The performs a happy song frequently. It is not aggressive when normal conditions are met. These clever birds reuse old woodpecker holes as nests instead of constructing their own. They eat primarily fungi found in decaying oak and pine trees. While most bird species build their nests on the ground or a few feet in the air, bluebirds opt for a more elevated location, building their homes nearly 50 feet in the air. 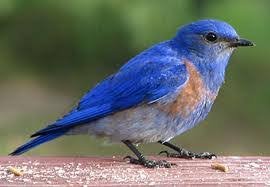 During nesting season, the Eastern Bluebird is more combative than usual. If another bird comes too close, it will attack it. That includes chickens and roosters, which are considerably larger than they are. In March, bluebirds start their courtship rituals. Part of their March madness is a sweet, loving courtship. The male will perform a song for a potential mate and strike macho poses in an effort to win her heart. When he sees her, he’ll spread his wings and flit before her. They’ll sit together and fluff each other’s feathers. To put it simply, the male will provide for the female’s nutritional needs.

Caterpillars, insects, worms, elderberries, blackberries, crickets, and honeysuckle are some of the species’ preferred foods. Did you know that it’s not uncommon for a parent’s offspring to stick around to help with the new brood? Despite the fact that these creatures frequently travel in large groups, each nest can only accommodate a single family. They leave for warmer climes in the south well ahead of the upcoming winter in order to avoid the harsh weather and food shortages. As new residents, Large, wooded areas are their first choice. As a result, during the spring and summer months, we frequently see them in parks and gardens rather than forests. 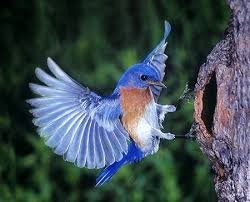 In the wild, the average lifespan of an Eastern bluebird is between six and ten years. Their chances of dying are highest as infants because they are defenseless against the many dangers they face in the world. Common predators include raccoons, cats, chipmunks, black bears, and even other birds like European starlings and house sparrows. However, being social creatures, they attempt to aid one another in peril. When a predator is near, the males in the flock will cry out to warn the others and their families. All nesting females have a unique song they use to beckon their male partners back to the territory. In addition to vocalizations, bluebirds use other forms of non-verbal communication, such as a unique wing-flapping gesture, to coordinate their activities.

In terms of food, these birds will eat the kind of big, unusual fruit you might not expect them to enjoy. Though their preference for grapes makes sense given their size, bluebirds will also eat figs and persimmons, both of which are significantly larger. They get most of their protein needs met in the fall when grasshoppers are plentiful. 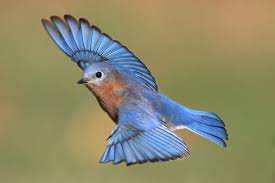 It may appear that these birds are following a farmer around during the winter and spring, but in reality, the bird is more interested in the land that the farmer is plowing than in the farmer himself. The bird frees the farmer from this laborious task, exposing a wide variety of insects. Although the birds have their preferences, they will eat most any insect that is unearthed by the plow. Scientists and researchers have noticed a decline in Eastern bluebird populations over the past several decades. The destruction of their homes in the wild was a major factor. Many people saw the need to aid these creatures by making wooden nest boxes and distributing them widely. Some of these containers can be found in people’s backyards, while others can be found along roadsides or in fields. The result is that the number of Eastern bluebirds has been steadily rising thanks to the efforts of the many generous people who have cared for them.