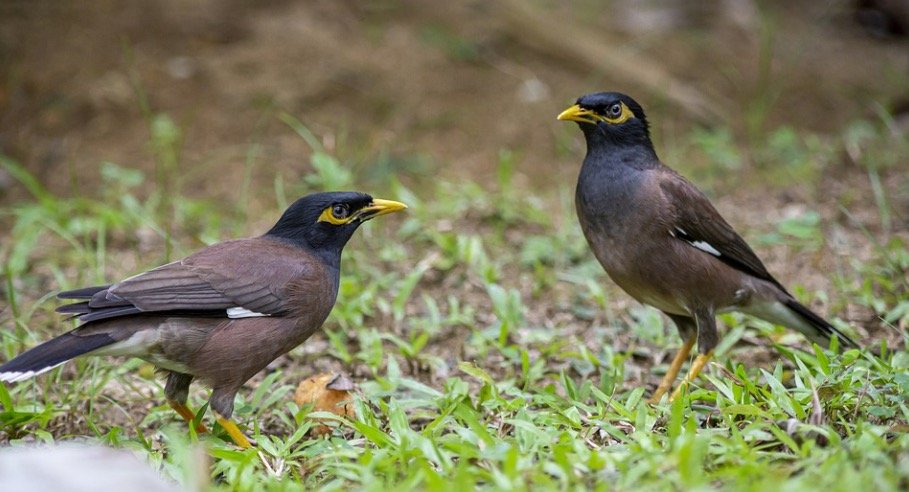 A myna bird is a carnivorous creature belonging to the Animalia family, phylum Chordata, class Aves, order Passeriformes, and family Sturnidae. Its length is up to 9 to 19.5 inches, it weighs up to 3 to 14 ounces, and it has a wingspan of up to 4.72 to 8.4 inches, with a lifetime of up to 25 years.

A myna bird is a bird that feeds on insects and other small animals, including crustaceans, rodents, and fish. The ability of some species to speak is one of the most distinctive characteristics. Myna birds are preyed upon by crows, cats, mongooses, and humans.

Physical features include yellow, dark-brown, black, and white skin colorations, and feathers on the skin, with a top speed of 50 mph.

California, Hawaii, Florida, Australia, New Zealand, and Japan are just a few of the places where these clever, boisterous, and interesting birds have been introduced. Some myna species make excellent pets. 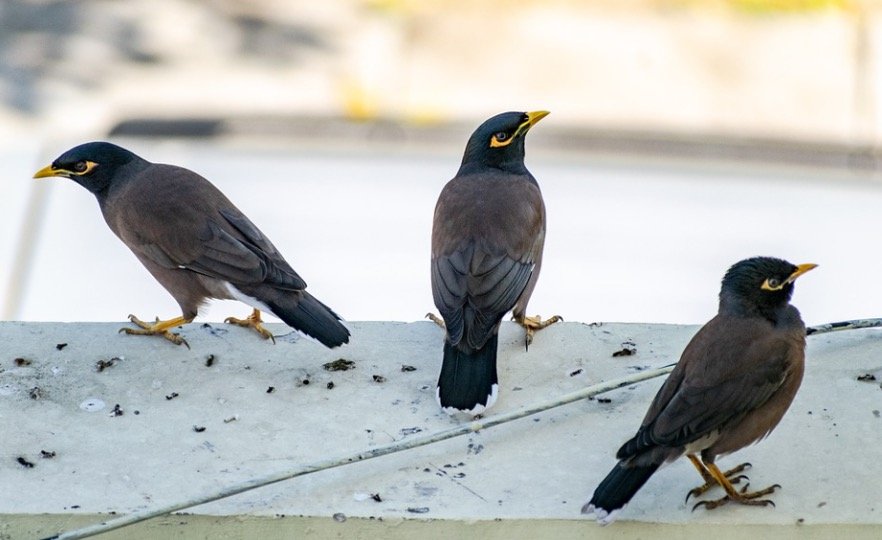 Some species of myna bird are abundant in places like the Indian subcontinent, Hawaii, and even Florida, where they may be seen soaring around in couples or flocks. They’re common in the trees of woods, jungles, public parks, and even people’s backyards.

To be sure, importing mynas to the Hawaiian islands comes at a cost: it upsets the delicate ecological balance that once existed on the islands. Most myna bird species build their nests in tree cavities, but some, like the bank myna, dig their nests in the mud of river banks or even in brick buildings.

Some small animals have been found to be evicted from tunnels by some myna species. Twigs, feathers, roots, trash, snarls of fibres, and leaves are used to line the nests of mynas.

Myna bird populations are also affected by the species. The common myna is, well, common, and in some locations where it competes with local species, it may be considered a nuisance.

Other species are threatened or perhaps extinct. The Bali and Nias hill mynas, both severely endangered, and the pale-bellied myna, which is fragile, are among these species. 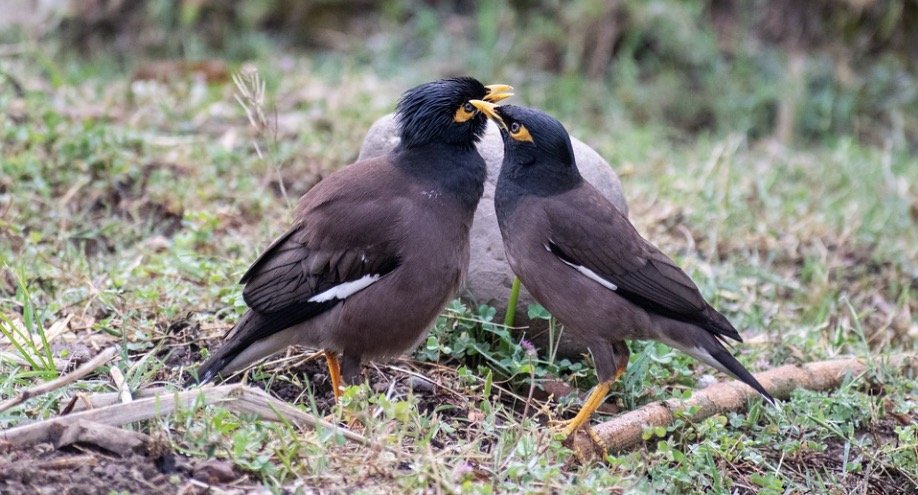 • The myna can produce a wide range of noises, some of which resemble human speech. The hill myna, on the other hand, does not have its own unique melody.

• Myna is derived from the Hindu term maina, which means “God’s messenger.”

• The Sri Lankan Hill Myna is shown on the country’s ten rupee stamp.

• The pied myna is not eaten by the Sema Nagas. They think the bird is a reborn person since it can mimic human speech. 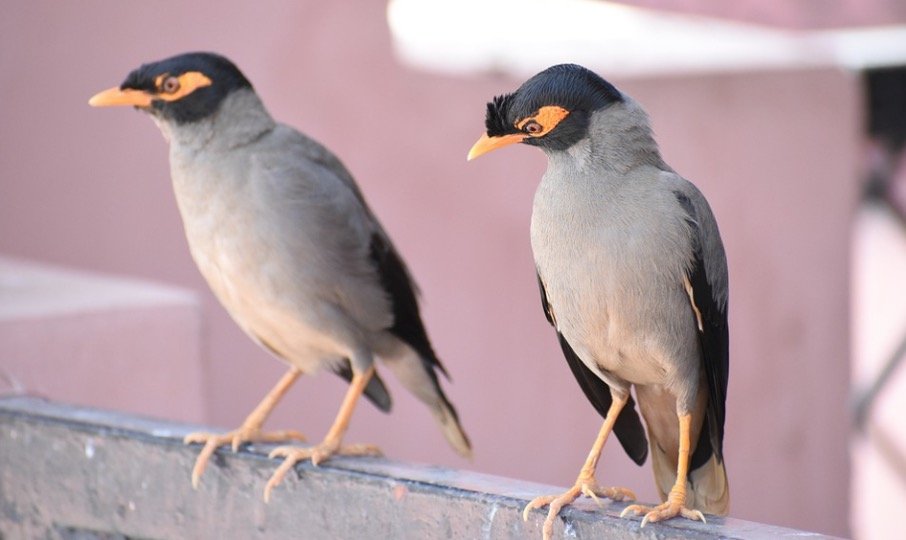 Because the myna bird belongs to more than one genus, it has a variety of scientific names. Sturnidae is the family name for starlings, and they are all different varieties of starlings. Sturnidae is derived from the Latin word “Sturnus,” which means starling. Streptocitta, Mino, Gracula, Basilornis, Acridotheres, Enodes, Scissirostrum, and Sturnus are some of the genera that mynas belong to.

Mynas are medium-sized passerines with powerful, yellow-colored feet and legs. Their bills are typically yellow, but some mynas have blue-green, black, or red bills. Many species have golden wattles, or areas of exposed skin on their cheeks or necks, and their black feathers are typically iridescent.

A ring of bare skin surrounds each eye in some birds. In most species, males and females are similar, but males may be a little more robust. Some mynas, such as the Sulawesi myna, have tufts of feathers that create a crest on their heads, and the male’s crest may be taller.

Many myna species have a small tail, but the white-necked myna has a very lengthy tail. Not only that, but because of its black and white colouring, it has been mistaken for a magpie.

Mynas are larger and heavier than most other starling species. The Nias hill myna may be up to 14 ounces in weight. 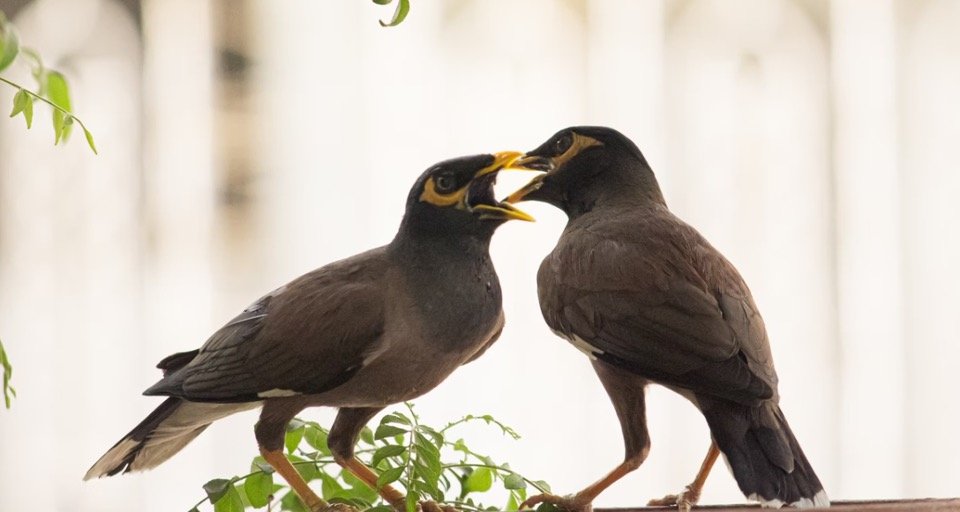 Even when they are quite young, mynas are social birds who prefer to flock together. Hundreds or even thousands of birds can sleep together in trees when they aren’t producing eggs or raising chicks, yet they become quite territorial and hostile during the mating season.

Mynas are known for their boldness, even when they are not breeding. Even fire ants will nest with the ordinary myna. This means it will either dust bathe in a fire ant colony or pick up the viciously stinging ants and drop them on its feathers.

The formic acid produced by the ants helps to fight parasites and may possibly make the ants edible. Foraging Mynas hop around the ground and use their beaks to break out tiny holes in the ground to obtain access to prey.

Grooming is done in pairs. They’re also quite vocal, with a sound library that includes screams, wails, gurgles, and whistles. When a myna is young, it learns these vocalisations, and there are distinct dialects for birds that dwell far apart.

The common hill myna is particularly skilled at imitation and can accurately imitate a human voice. 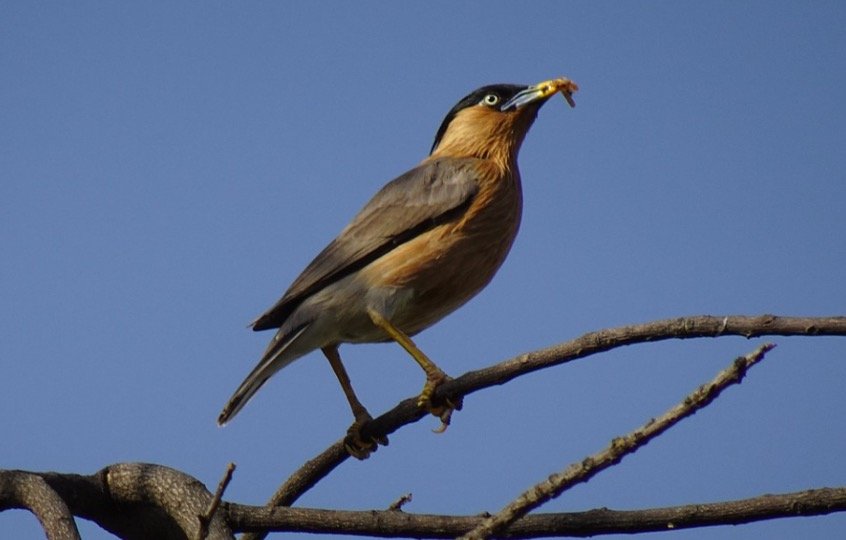 Myna birds, like other starlings, are omnivores, meaning they’ll eat whatever they can catch, which they like. Pinkies, newborn mice, crickets, mealworms, and other insects can be fed to pet myna birds.

Fruits like raspberries, apricots, and blueberries, as well as vegetables like zucchini and spinach, can be offered to them on occasion. Mynas cannot process lactose, so they should not be fed too much dairy.

Avocados, chocolate, and caffeine-containing foods should also be avoided by the myna’s owner. Mynas are poisoned by all of these foods. Smaller animals, other birds’ eggs and young, fruit, nectar, berries, and grains are all part of the myna bird’s diet. They’ve been known to consume human waste, roadkill, and even go into the water to capture a fish. 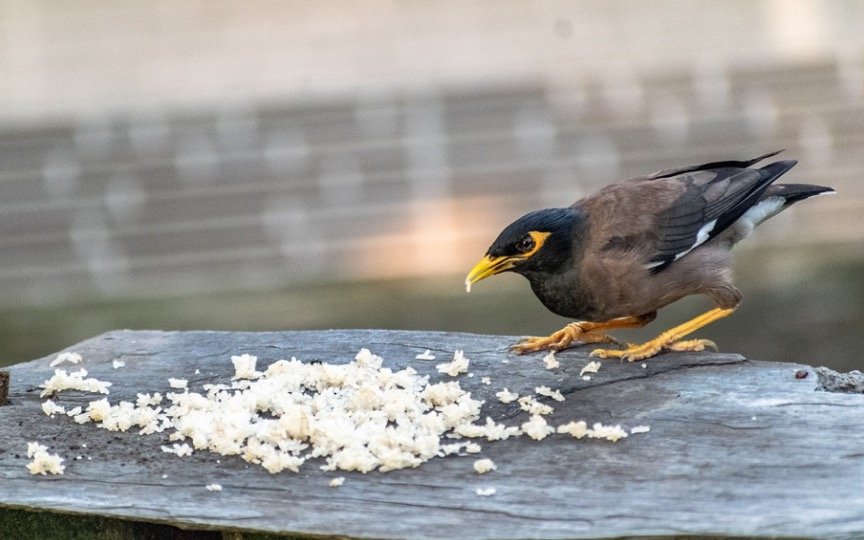 Myna birds often form big flocks to defend themselves from predators. Nonetheless, crows, mongooses, and domestic cats prey on these passerines. Humans have even caught and eaten myna birds.

Myna birds suffer from parasites like tapeworms and mites, which is why they bathe in ants. Habitat fragmentation and destruction are further hazards, while some birds, like the common myna, adapt to and even benefit from human activities.

Many myna bird species begin breeding in the spring, while others do it in the fall, late winter, or late summer. Some species reproduce more than once a year. Mynas are monogamous and protect their territories, sometimes viciously.

Females deposit two to five eggs in a clutch after a courting ritual that includes feather fluffing and head bobbing. The eggs are usually a bright blue colour. The incubation period is between 13 and 18 days.

The eggs are incubated by both parents, but the female normally spends more time doing so. Chicks are blind and defenceless newborns who are fed by both parents. The hatchlings will fledge in 22 to 24 days, although they may not be ready to fly for another week.

Even so, the parents continue to care for and feed their children. When mynas are around a year old, they are sexually mature. They may live anywhere from four to twenty-five years, depending on the species.