The Phasianidae family includes pheasants, which are found in many different parts of the world. The common pheasant is the most popular or well-known pheasant. While the female pheasant is basic and unadorned, the male has more colorful feathers and a longer tail. Hunting pheasants are well-known game birds. In certain cases, people keep them as pets for both entertainment and beauty.

What Do Pheasants Eat? 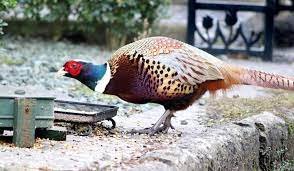 It is common knowledge that pheasant species are omnivores that rely almost entirely on ground-based meals. It’s not uncommon for them to feed on many sorts of fruit, seeds, nuts, and grains as well as a wide variety of insects, arthropods, and other critters. They also prey on small animals including mice and lizards in some cases. When insects are in abundance, a pheasant’s normal diet consists of more insects and meat in the summer, while in the winter, they eat more seeds and plants.

Pheasants can be found in every region of the world, from the Himalayas to South America’s lush rainforests. They have a wide range of dietary preferences, although all pheasants are omnivores that can eat both plants and small animals like insects and birds.

What Do Pheasants Eat in summer? 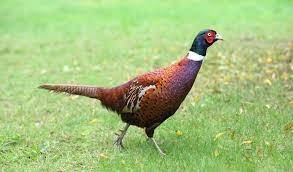 Insects are a favorite food for pheasants during the spring and summer months, as well as in the fall in warmer climates. Grasshoppers, crickets, potato beetles, gypsy moths, browntail moth caterpillars, tent caterpillars, and cutworms are some of their favorite prey items. The first five weeks of a pheasant chick’s life are spent eating insects. They prefer eating acorns, pine seeds, and wild berries in the summer and fall.

What Do Pheasants Eat in winter? 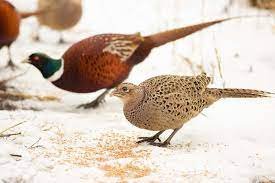 The foods they prefer to eat during the colder months are roots, berries, grains, and seeds of the plant kingdom. Pheasants in harvested crop fields eat grains like waste corn, wheat, grain, sorghum, barley, oats, buckwheat, and sunflowers. In old fields, farmland borders, and other natural areas are seeds of legumes, ragweed, smartweed, crotons, and burdock.

Also, know What is the State Bird of Colorado?

Other foods which pheasants eat

A pheasant’s primary dietary source is seeds. Grain, seed, acorn, buckwheat, oats, corn, sunflower seeds, and weed seeds are just a few of the many seeds they like to consume. These birds will eat nearly any kind of seed they come upon. As long as it’s easy to swallow, these birds will try to eat whatever. 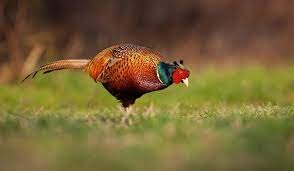 Additionally, these birds eat a wide variety of grasses and other plants. If they can peck at it, they’ll devour the leaves and tender stems of whatever plant they can get their hands on. Herbs, broccoli, spinach, and salad are just a few of the many green meals they enjoy. Additionally, they’ll eat and peck at virtually any type of grass they come upon.

As well as humans, insects are a favorite food of the peasantry. They’ll devour just about any insect they come across and catch it for food. The pheasant will eat an insect if it is easy to chew and tastes good. A wide variety of non-poisonous and non-dangerous insects are favorites, including grubs, beetles, flies, butterflies, termites, crickets, and many more.

It is possible for these birds to eat fruits and vegetables if they happen to come upon them. Even non-food items can be pecked at by pheasants since they are so curious about the world around them. When a piece of fruit or vegetable seems appetizing, they’ll peck at it and devour it.

Cabbage, pumpkin, beets, turnips, tomatoes, grapes, pear, apples, and a slew of other fruits and vegetables can be served.

What do pheasants eat in the wild? 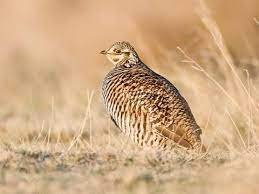 There are several types of food that common pheasants consume, including fruit, seeds, nuts, mast (roots and buds), nuts, and grains. They also eat insects, such as ants, leather jackets, and grubs as well as other arthropods.

Bird prestart and game bird grower meals are common diets for pheasants in captivity. It is great for keeping these large game birds healthy and active with a protein content of 24 to 28 percent.

Flocks of pheasants are ground-dwellers who rarely take to the skies or roost on branches. They only eat what they can find on the ground, which they do by going through the underbrush and picking at the plants with their beaks and claws. There are a variety of habitats in which pheasants can be found. 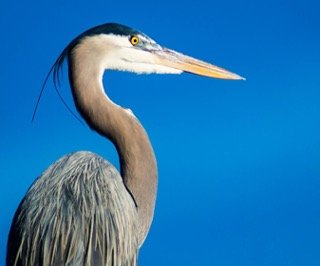 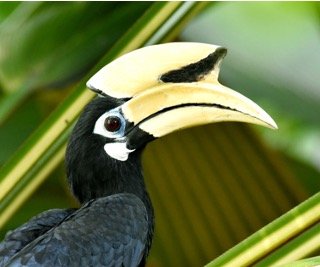