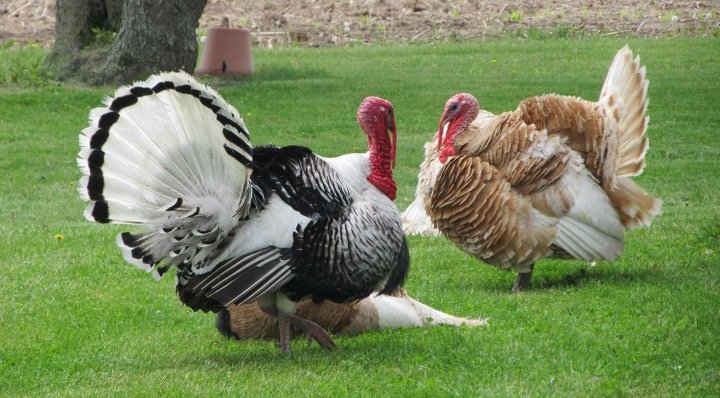 What is a Group of Turkeys Called?

Ground-dwelling turkeys with thick and magnificent plumage are big and heavy-set birds. During  Christmas and Thanksgiving, millions of turkeys get consumed, yet we should not take these clever and compassionate birds for granted.

Turkeys are also social and gregarious birds. The name of a group of Turkeys depends on whether you’re talking about a wild flock or a flock of fowl turkeys. Keeping this in mind, there are a few popular names for a bunch of turkeys.

What is a group of Turkey called?

A rafter, a gang, and a flock are the most common collective nouns for a bunch of turkeys. While flock is self-explanatory, the rafter is the most uncommon of the three phrases, assumed to come from turkeys sleeping in trees and other high-up areas.

Also, know What is a Group of Ducks Called?

There are several other different names for turkey groups, such as:

Brood of Turkeys, a crop of Turkeys, a dole of Turkeys, and so on! A strange term for them is, however, a death row of Turkeys and they are wisely called so because of the huge level of Turkey consumption on Christmas and Thanksgiving.

The reason behind calling Turkeys Gangs

At the beginning of the mating season, when male turkeys begin to cluster with females, they are known as bachelors. Juvenile male turkeys (Jakes) commonly gang up on adult male turkeys (Toms), which is why groups of turkeys are sometimes referred to as gangs or mobs.

What makes it a rafter of turkeys?

It’s a valid question that is a bit difficult to answer! The origins of the term “rafter” for a bunch of turkeys are unknown. Rafters are the eaves of a building’s roof, and some people believe that turkeys like to nest and roost in them if they can.

Turkeys like to perch on tree branches and roost in the canopy, or ‘rafters,’ where they are protected from predators. Another idea is that the term rafter was taken from the Greek meaning ‘to sew together in Mediaeval English and then applied to groups of turkeys in the 15th century.

To say the least, the evidence is shaky, and the fact is that determining the origin of the term rafters for a bunch of turkeys is tough.

What Not to Call a Turkey Group

One word that is frequently used to describe a bunch of turkeys is absolutely inaccurate. And that is a Gaggle. The phrase “gaggle” refers to a bunch of geese, not turkeys! Even though they are both birds, not all naming standards apply. For hundreds of years, the phrase gaggle has been used. However, calling a bunch of turkeys a gaggle is incorrect.

Why do turkeys gather in big flocks?

Turkeys congregate in gendered groups for most of the year. Females and men create separate flocks. Gendered turkey flocks are often close together, ranging in size from 15 to 50 birds.

Turkeys, like so many other birds, congregate to find protection in numbers. Turkeys can effectively flee and reorganize after detecting a threat because of their diverse vocal calls.

Turkey’s flock is necessary for reproduction. Male turkeys battle for supremacy in flocks, and a dominant male might mate with up to ten hens. Because hens may brood up to 12 offspring, male turkeys generally stick with their siblings.

When do turkeys congregate?

Turkeys maintain gendered flocks for the majority of the year but come together in March and April during the mating season.

Turkeys begin to divide into distinct mating flocks comprising males and numerous females after a few weeks. Females that are nesting become more reclusive and often separate away from males.

Turkeys have a surprising amount of social complexity. Male groups have strong and continuing dominance rituals, although immature males (called jakes) may strive to impose control over females until they can join a male flock and compete with other males.

Male turkeys are known to stick together in sibling groupings and to be very devoted to one another. Male and female turkeys begin to flock together once more like fall and winter approach, before retiring into their winter roosts.

How big is a flock of turkeys?

Turkey flocks are normally tiny, ranging from 15 to 50 birds, however, this varies according to the season. Flocks of 100 to 200 birds can form as male and female flocks begin to cluster at the start of the mating season.

The turkeys will begin to divide into breeding groups after a few weeks. Males and females spend most of their time apart, while females brood their babies, until fall and winter when turkeys begin to cluster before roosting.

What do you call a couple of turkeys?

There is no term for a pair of turkeys. Male turkeys are known as gobblers or Toms, while young males and females are known as Jakes and Jennys, respectively. Poults are the young turkeys.

What do you call a gaggle of baby turkeys?

A flock of newborn turkeys has no particular name (poults). Poults are baby birds for tamed breeders. You can also call untamed and non-domesticated juvenile young ones chicks. There are no hard rules for naming this animal group, and no one will hold you accountable if you make a mistake.

Turkey hens may lay up to 15 eggs each clutch and are extremely protective of their offspring. Brooding chickens become fairly secretive during nesting, however, they often cluster together with other hens.

Do turkeys flock together as they fly?

Turkeys can fly up to 50 miles per hour, believe it or not! Turkeys travel a lot, even though they don’t fly vast distances at a time. Do they, however, fly together? Yes, they will fly together for short lengths at a time, despite the fact that they do not travel far. This is usually done to either find food or avoid predators.

You now know what a group of turkeys is called. Wild turkeys are quite active and enjoy fundamental freedom, while domesticated turkeys, particularly for breeding reasons, have several challenges.

They lack the necessary lighting and space, while the surrounding environment is bad and confusing due to the congested conditions. This is why birds fight and suffer serious injuries.