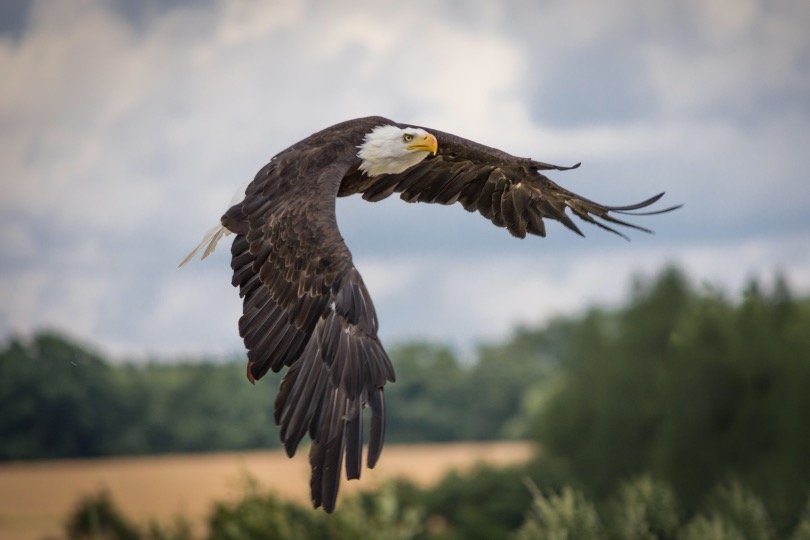 Eagles are known to be furious birds as they are frightening predators. Eagles are a symbol of strength, loyalty, honor, and devotion. There are different types of eagles such as golden eagle, bald eagle, white-tailed eagle, crowned eagle, and harpy eagle are the most known.

They all have almost similar appearances and habitats. Let us talk about the Bald eagle and Golden eagle and the differences between them. These two species of eagle are different in many ways. 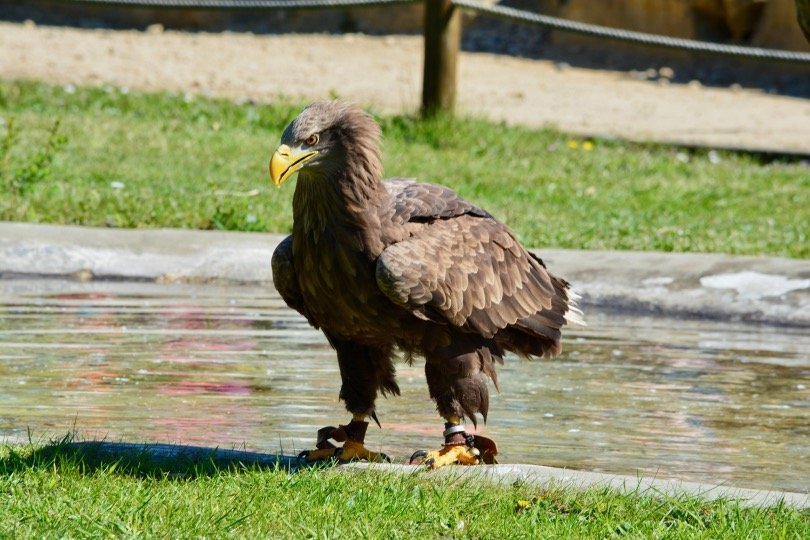 People generally mistake bald eagles for golden eagles and the other way around as their appearances have a very subtle difference. Let’s talk about it in detail:

The weight difference between the golden eagle and the bald eagle is negotiable and minimal.

A golden eagle’s body, its head, wings, and tail are bluish-brown, sometimes it’s greyish brown or dark brown. Its belly beneath its wings and the nape of its neck is the same brown colour, just a little lighter.

Most of them have either palish brown coloured feet or yellowish feet covered with feathers and this attribute is difficult to recognise.

On the other hand, most bald eagles have brown coloured bodies and wings. However, their necks, heads and tails are pure white in colour. The most distinguished and visible feature of a bald eagle is its bright yellow beak and its bare feet. Its feet are well-equipped with spiky and strong talons.

Golden eagles have shorter and narrower beaks which are yellow but the outer part is black. On the other hand, bald eagles have longer beaks in comparison and they are bright yellow in colour. This distinction can be noticed quite easily.

Bald eagles have thicker wings in width which makes their wings appear to be shorter but in reality, they have a larger wingspan than golden eagles.

A bald eagle’s tail is white in colour overall. While a golden eagle’s tail has a white base with a black or brown band at the end.

Golden eagles prey on medium-sized rabbits, squirrels, reptiles, and fish and they can even hunt deer. On the other hand, bald eagles prey on fish, they are designed to eat fish, and mostly they hunt salmon.

Apart from fish, they prey on small birds and rodents when needed. Fun fact: golden eagles when full once, can go without food for several days. 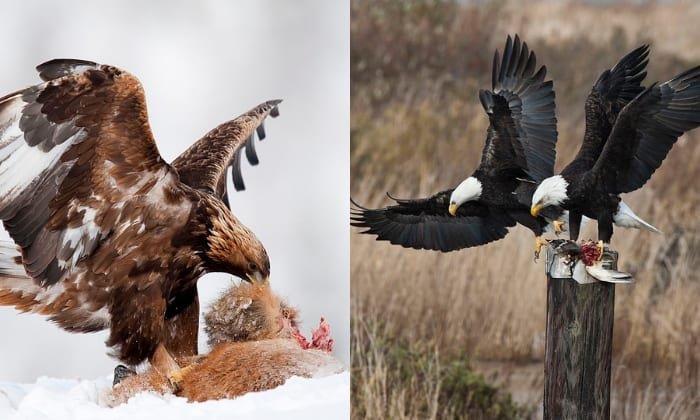 The golden eagle as well as the bald eagle have excellent eyesight, which contributes to them being amazing and furious predators. The golden eagles are always ready to attack and use various hunting methods depending upon the weather conditions.

Golden eagles are known to be more violent than bald eagles. They hunt in small groups, mostly in pairs. Bald eagles lookout for their prey from a very high spot in the sky.

Their favourite meal is fish so they usually hunt around waterfalls, rivers, seas, and oceans. They do not eat their prey right after hunting, they take their prey to their nest and then eat them.

Golden eagles live in pairs and build multiple nests in a particular area. They build their nests with plenty of grass and big branches. Their nests are usually located on tall trees and cliffs.

The female eagles lay eggs from January to May every year. Female eagles lay about 2 eggs each time. Bald eagles build their nests with twigs, branches, grass, and feathers.

They generally build big nests. Every year the female eagle lays about one to three eggs, usually in November. The timeline for laying eggs for a bald eagle depends on where they live.

Bald eagles are North American birds. Their range is from the border of Mexico and America to Canada. They can also be seen in the regions of Alaska, the Mississippi River, Rocky Mountain, and along the East and West Coast: Golden eagles range from high mountains to dense forests around the world. But they are popular in Mexico and North America. They are also found in North Africa, Asia, and Europe.

In the above article, we discussed the differences between a golden eagle and a bald eagle. We discussed their physical attributes, under which we covered their size, feather colour, wings, heads and beaks, and tails.

Further, we took a look at their flying patterns, diets, hunting habits, nest sites and ranges. I hope after reading this article your doubts about a golden eagle and bald eagle are resolved.