A member of the tit family Paridae, the great tit (Parus major) is a species of a passerine bird. Great tits are a common sight in wooded areas over much of the world, including Europe, the Middle East, Central Asia, the eastern Palearctic to the Amur River, and even parts of North Africa; most great tits do not move except during the worst of winters. This species was once considered to be a composite of many different subspecies. As a result of DNA analysis, the great tit was split into two species: the southern Asian cinereous tit and the eastern Asian Japanese tit. The great tit is still the most common of the Parus birds.

Where do great tits nest? 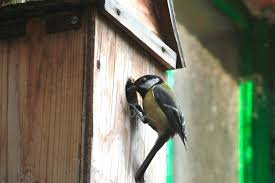 When given the option, a great tit would pick a nesting site in an established forest. They lay their eggs in a hole in a tree for maximum security. Nowadays, there is less room to roam in old forests. This means that great tits can nest anywhere from a hole in a wall or a crack in a rock to an abandoned bird nest or a squirrel’s dray. Great tits will nest everywhere, including in air ducts, pipelines, and even letterboxes, so don’t exclude your local man-made buildings as potential nesting sites. And they’re perfectly content to use nesting boxes set up in backyards. Nesting boxes are large enough to accommodate the multiple mouths that these birds must feed, and the modest entrance helps the birds feel completely at home. Great tits may feel more secure in nests that have been artificially constructed or are provided by humans. They have to lay so many eggs because so many are eaten by predators before they can hatch. If you want to help the tit population in your area, installing a few nesting boxes in your garden is a great idea.

Where would great tits thrive best? 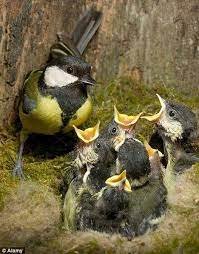 Breeding great tits typically use the cavities of old trees in well-established mixed and deciduous woods. But they’ve gotten used to humans, so you may find them in lots of green spaces like parks and gardens. It is common for great tits to make their homes in old woodpecker holes or other naturally occurring tree cavities. However, in urban and suburban areas, such holes can be hard to come by, so the resourceful tits have taken to making do with everything from fissures in walls and cavities under roof tiles to letterboxes and, of course, birdhouses.

Where do great tits get their nesting material? 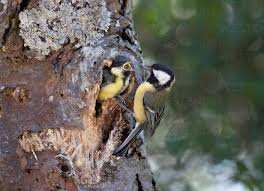 Great tits use resources like grass, plant fibres, moss, hair, wool, and feathers to construct their nests. Because they lay so many eggs, they will weave a giant cup out of the material to keep the eggs safe and snug. Female great tits can lay anywhere from 5 to 12 eggs at a time, however the average is closer to 7. Most of their eggs are eaten by predators before they ever get a chance to develop, therefore they lay a lot of them. Since this is the case, they have likely evolved to become more hostile at nesting places in order to ensure the safety of their young.

Does the female great tit build the nest? 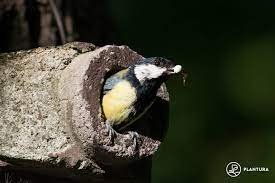 The nest of the great tit is constructed entirely by the female. She does everything, including sitting on the eggs, by herself. While the female is sitting on her eggs, the male would want to point out that he does feed her. To tell the sex of these birds in this way is ingenious. Here’s a hint if you’ve got fantastic tits hanging around your garden and you’re curious as to what gender they are. It is safe to assume that a great tit carrying grass, moss, small twigs, feathers, etc. in her beak is a female. Only the females contribute to building the nest. The male is the one you’ll see if a great tit is eating at your feeder and suddenly gets a scared look on its face. He promised to run out for just a minute to grab some seeds, but he’s been gone for hours now.

Where do great tits spend winter?

The great tit is a resident of the United Kingdom and spends the cold season near to home. Actually, great tits only perform altitudinal migration, wherein birds from higher altitudes fly to lower ones for the winter.

Great tit has a wide repertoire. The powerful, clear, and resonant tones of the two-syllable “zi-be” or the three-syllable “zi-zi-be,” however, are something you can count on hearing. Just like other members of the tit family, great tits use a variety of sounds.

Do great tits use nest boxes? 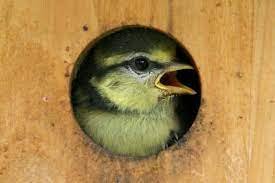 The great tit is a bird that frequently uses nesting boxes. They are so secure that birds use them as a nesting site. Great tits construct their nests in natural cavities such as those found in trees and between rocks. Nesting sites can be everywhere, including man-made structures like walls, pipelines, and more. However, in the wild, predators can easily penetrate their nests and steal their eggs. It’s not just raccoons and foxes that go into the nests of great tits; woodpeckers, weasels, and squirrels do the same. There is a higher success rate for brood survival when birds nest in nesting boxes because these structures present a greater obstacle to predators.
Providing high-quality food and a few nesting boxes will encourage great tits to make your garden their home. However, smaller species may be evicted from nesting boxes if they become aggressive.

Do great tits nest in the same place every year?

Great tits will return to the same territory year after year unless it is badly disturbed. Great tits and their offspring have a habit of passing on their nesting locations to subsequent generations.
How successfully great tits have adapted to life after we’ve taken so much of their land is one of their greatest achievements. Although they do prefer nesting in wooded locations, this isn’t always accessible in the UK today. In spite of this, great tits have adapted to nesting in parks and gardens so effectively that most of them no longer even remember what it’s like to nest in the woods.