When not absolutely necessary, the Roadrunner uses his wings to take to the air. It has a top speed of 15 mph, though it is likely capable of much faster bursts when chasing a lizard or other fast-moving prey. Its reputation as a formidable foe of rattlesnakes is greatly exaggerated, but it does consume an impressively wide range of insectivorous animals.
Desert roadrunners, New Mexico’s state bird, have deep cultural roots in the southwestern United States. These fascinating fowl have been featured in both popular culture and Native American history and lore. Knowing that the roadrunner is one of the few predators capable of hunting rattlesnakes, you may want to attract this fascinating creature to your yard or garden by providing the ideal environment for it.

How do you find a roadrunner’s nest? 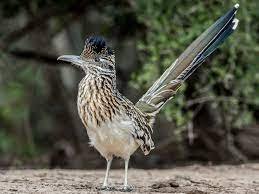 The ideal nesting location for a roadrunner is three to ten feet off the ground in the shade. Nests are commonly placed on a low horizontal branch or in a bush’s fork. Nests are commonly found next to roads, trails, and streambeds because that’s how Roadrunners get around. This reduces the amount of effort needed to bring supplies back to the nest or bring food for the young.

Both arid regions and open grassland and scrubland are suitable environments. Canyons and pinyon-juniper forests at higher altitudes are also possible habitats for these animals. In the Sonoran Desert, you’ll find the greatest concentration of this species. In general, roadrunners are not suited to close human companionship. They prefer to avoid the noise and activity of cities, but they sometimes choose to nest close to people’s houses in the countryside.

Diet of a roadrunner 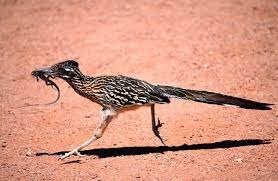 Animals, including small mammals, reptiles, frogs, toads, insects, centipedes, scorpions, and birds, make up the vast majority of a roadrunner’s diet. Additionally, roadrunners will eat carrion and will attack and eat bird eggs and chicks. The rattlesnake is dispatched by a series of pecks to the head. For easier digestion, they repeatedly slam large prey against a rock or the ground, in this case, rodents, and lizards, to break down the bones and elongate the victim. It is not uncommon for these opportunistic predators to steal birds from bird feeders or nest boxes in people’s yards. Roughly 10% of a roadrunner’s diet in the winter consists of fruit, seeds, and other plant material. 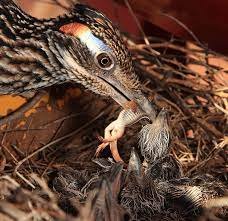 It is possible that roadrunners form lifelong pairs that defend their territory year-round. During courtship, it is common for the pair to engage in foot chases while taking frequent breaks to rest. In this scenario, one bird (of either sex) carries a stick or blade of grass, approaches the other, and either drops it on the ground or hands it to the other bird.

A male will also wag his tail from side to side while slowly bowing to a female, or run away from her with his tail and wings raised over his back before slowly lowering the wings. The nest is usually found 2-12 feet off the ground, in a dense bush, low tree, or cactus. The nest is a platform made of sticks that are lined with grass, leaves, feathers, and even snakeskin or bits of cow manure.

The pair will pick a nesting spot that is three to ten feet off the ground, such as a sturdy bush, cactus, or small tree with a horizontal branch. The Greater Roadrunner’s shady, well-hidden nest is typically situated next to a path or streambed, which the adult birds use to transport plant materials and small prey to the young. 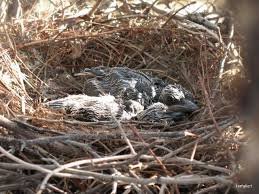 Male Twigs are brought to the female Greater Roadrunner, who fashions them into a small platform with a nest cup about 4 inches deep. If a male takes too long to gather sticks, his female companion may remind him with a whining call. Lined with leaves, grasses, feathers, smaller sticks, snakeskin, and flakes of cattle and horse manure, the finished nest can measure over 17 inches in diameter and 8 inches in height. In some cases, parents may continue to work on the nest even after the eggs have been laid, adding material to the sides of the nest to accommodate their growing chicks. Nests from the previous year are sometimes used again.

How do roadrunners construct their homes? 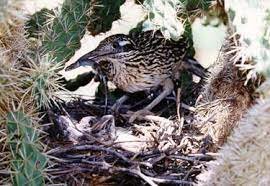 To help the female with the nest, male roadrunners will bring back sticks, twigs, and other building materials. She will make the nest just right for herself. Feathers, grass, roots, and even snakeskin are common nesting materials for birds.

When finished, the nest will be a small platform with a nest cup that is four inches deep. It has a maximum diameter of over seventeen inches and a maximum height of over eight inches. The incubation period isn’t always the end of the parents’ nest-building efforts; as the young develop, they may choose to continue adding to the structure.

When it comes to constructing a nest, females can be picky. The female will make a distinct vocalization to remind the male to resume material-gathering if he stops for an extended period of time. Somewhat analogously, this is how we feel when our patience with a partner begins to wear thin and they allow themselves to become preoccupied for too long.

During what times of the year do roadrunners typically have their nests?

Nest construction by Roadrunners typically begins between March and October. However, in the far northern parts of the roadrunner’s range or at higher elevations, it can start later. Perhaps unexpectedly, roadrunners can be found in environments ranging from the ocean floor to high desert regions near 10,000 feet in elevation.

Do roadrunners use the same nest more than once?

The nest of a previous year may be used again by a pair of roadrunners. They have been known to use another bird’s nest as a laying site on rare occasions. Nests of common ravens or mockingbirds are often used as a substitute because of their similar dimensions.

What time of day do roadrunners typically start laying their eggs?

At any time between March and October, a female roadrunner can lay her eggs. They usually produce a clutch of three to five eggs. The father and mother of a roadrunner family both incubate the eggs and feed the young. It takes about 20 days to hatch an egg.