Intriguing as a species, starlings are worth learning more about. They are so communicative and common in cities that they incorporate sounds like car alarms into their songs. It is possible to spot starlings in the northern parts of Australia, Asia, Europe, and Africa, as well as the tropical Pacific Islands. This group is not an indigenous American population. Starlings are native to both North America and New Zealand, where they compete with native bird species for food. Because of this, they are considered an invasive species in some areas. About 110 species of starlings are part of the family Sturnidae. Although there are some subtle differences in their diet, they eat the same things overall. 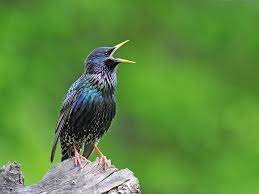 European Starlings, like other small birds, can be found all over Eurasia and North America. When a large group of starlings congregates, they will often form a murmuration and fly in a coordinated pattern across the sky. One of nature’s most ethereal and astounding spectacles is the murmuration of starlings.

Appearance and size of a Starling 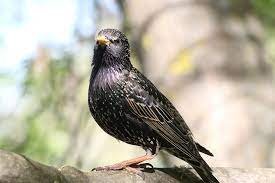 These starlings are born completely naked and with significantly less fur than adult starlings. They have a thin layer of grey feathers over a white underbelly, and their heads are usually brownish grey with a bright yellow bill and bright orange in the parts of the beak. Starlings are dependent on their parents for survival because they hatch in a less developed position. To be on par with other baby birds, their legs are too short at just 9 mm in length when they hatch.

A newborn starling weighs only 6.4 grams, so they are not particularly heavy. The first eleven days after hatching are a critical period of rapid development, during which they can gain a maximum of only 71 grams in weight.

Where do starling babies first enter the world? 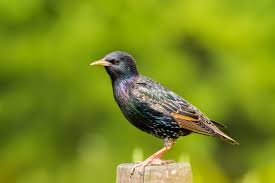 They begin mating in early March and continue through July, typically within their habitat. In the UK and other northern parts of their habitual areas, starling chicks are typically born between April and May. In North America, the breeding season typically occurs later, between the months of September and December.

The vast majority of these birds never leave our area. In contrast, thousands more birds migrate from Eastern Europe each winter, effectively doubling the population. They’ve had to head west in search of sustenance because of the harsh climate there.

Starlings arrive in large numbers along the east coast of England during the months of October and November, on their way to warmer climates. After making their way across northern Europe, the vast majority have taken a flight across the North Sea from Belgium or the Netherlands. Over 409,000 starlings were spotted flying over Hunstanton, Norfolk, in the fall of 1997, with 87,000 of those seen on October 16th alone. The vast majority of these birds will keep flying westward until they’ve covered the entire United States. They congregate with native starlings to form massive flocks that frequently roost in public spaces like parks, reedbeds, and urban cores.

Returning to Eastern Europe in the spring, the migratory starlings leave our shores as the native birds here begin establishing their breeding grounds. They lay their eggs in holes they’ve found in trees and buildings. After about 21 days in the nest, the young are fed by their parents for a few more days before they leave to join the flock in late summer. 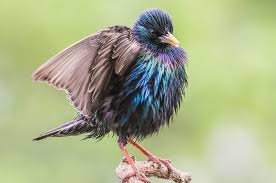 Starlings’ natural habitats include much of Eurasia, the northern coast of Africa, and even eastern countries like India and Mongolia. During the colder months in the Northern Hemisphere, you can find them in the Mediterranean and the Middle East. Starlings travel to Finland, Russia, and Kazakhstan during the summer months. The breeding range for starlings in North America includes the entire United States mainland, the southern parts of all Canadian provinces, and the coast of British Columbia on the Pacific Ocean. They travel all the way up to the Arctic Circle in the summer. 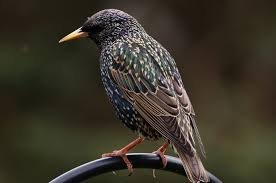 Starlings have been observed to gather in massive roosts that can hold tens of thousands of birds. Flock populations can swell into the hundreds of thousands in southern Ontario and other provinces as they migrate south for the winter.
Their preferred nesting locations are high up in trees or in buildings with cavities, where they can easily construct nests out of dead grasses and fresh vegetation rich in chemicals that act as fumigants. Up until the chicks are fully feathered, starlings will keep the nest warm and cozy. After that, however, the nest will start to look like a pest-infested pile of compost. Sometimes a mother will lay seven eggs in a single clutch. Starling chicks develop rapidly and fledge in under three weeks.

What can I do to stop European starlings from taking over my yard?

Take away the birds’ food, including any feeders you may have, Take care of any potential bird nesting spots outside, and seal them up. Install wire mesh over all vents and holes.

From local to transient travelers. Many young birds and adult birds that live north of 40 degrees (New York City’s latitude) spend the winter in warmer climes, migrating south along river valleys and coastal plains. A small number of these birds migrate to northern Mexico and the Lesser Antilles for the winter, but the vast majority remain in North America proper.