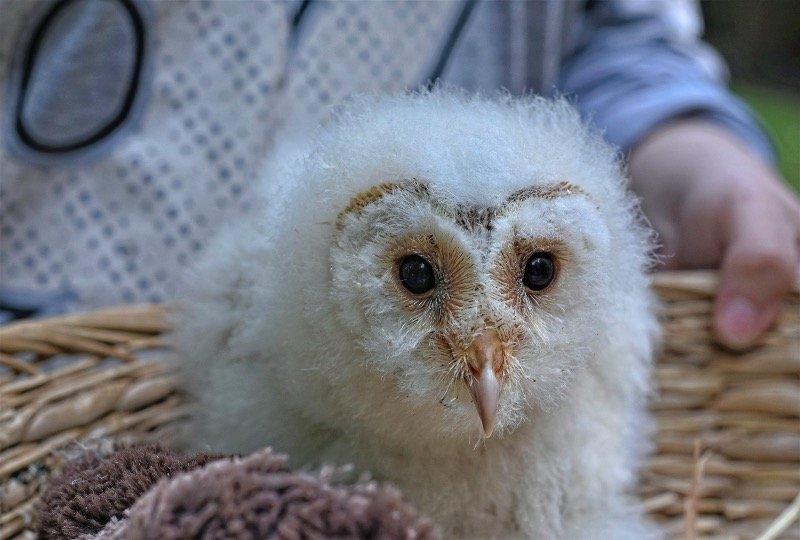 How does a baby owl look?

Most newborn owls are extraordinarily fluffy, with thick white or grey down covering them. They frequently have heart-shaped heads and black button-like circular eyes. From the fluff protrudes a hook-shaped beak.

Baby owls have a prominent egg tooth, which is a sharp protrusion from their beak that permits them to penetrate the egg when hatching. These vanish within a week following hatching.

What size do baby owls have?

Even the largest owls’ owlets, such as the Great Horned owl, Snowy owl, and Eurasian Eagle-owl, are rather little in comparison to the size of these birds. For example, snowy owl chicks are just 6.5cm (2.5in) tall. They are around 2.5 feet in height when fully mature.

What do baby owls weigh?

Even huge owl offspring will only weigh between 40g and 60g (2oz) at birth. A typical chicken chick may weigh roughly 30g, whereas a duckling may weigh around 50g. Babies of the Great Horned Owls weigh roughly 35g (1.2oz). Owlets, on the whole, are quite small.

The Elf owl and Pygmy owl are two of the world’s tiniest owls, weighing just 40g (1.5 oz) when fully mature, while their offspring weigh only 4g (0.14oz)! They are only a little bigger than a bumblebee.

In their first month, owl chicks develop and gain weight at an alarming rate. Between days 14 and 28, owlets’ weight can easily double, and their features become flatter and more prominent. The Great Horned owl weighs just 35g (1.2oz) at birth but grows to 800g (28oz) in about a month!

The rich fluffy down starts to give way to more typical adult feathers, but the down will last at least two months. Juvenile owls may leave the nest before losing all of their baby feathers, but they will resemble adult owls after around 14 weeks. 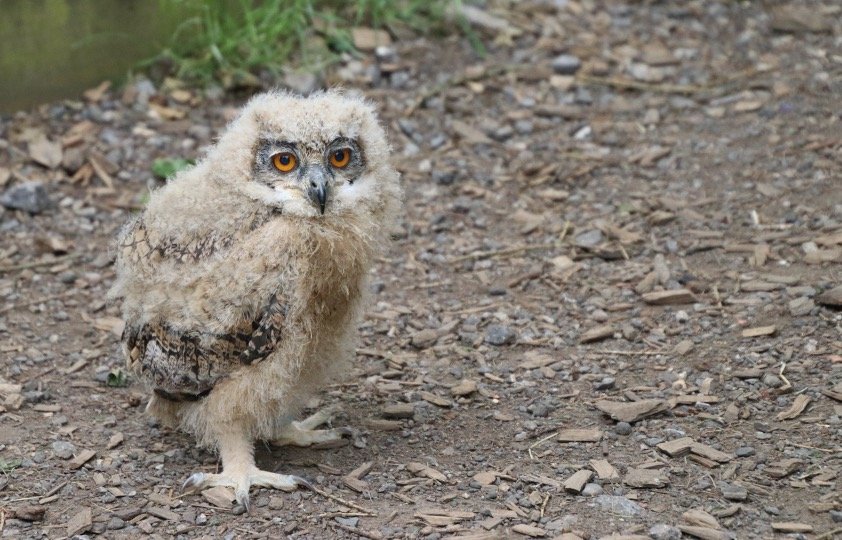 What is the name of a bunch of baby owls?

Witnessing a group of owls is unusual enough, but to see a group of young owls in the wild is uncommon. Owls normally produce tiny clutches of 4 to 6 eggs, while some varieties lay as few as 1 to 3 eggs and others as many as 10 to 12, based on the season.

Overall, owls have covert nests with a limited number of chicks, and owl chicks only spend 1 to 3 months in the nest before fledging and becoming independent. This is why you’re rare to see newborn owls together, even if they’re from the same nest.

What causes newborn owls to sleep with their heads down?

Some newborn owls have been spotted sleeping in a somewhat crumpled position with their heads down towards the ground. This is due to their huge and massive heads, which are physically incapable of supporting them for the first few days of their life.

It’s quite rare that owlets from separate married owl pairs will flock together. True, owls are primarily solitary, preferring to be alone in their monogamous partnerships.

Some species, such as the Burrowing and Tawny owls, may flock and live in small groups for at least part of the year, in which case owlets may spend some time socializing outside of their family units. In general, newborn owls are fairly independent as soon as they leave the nest, which is usually about 12 weeks.

What do baby owls eat?

Baby owls devour everything their parents put in front of them. Adult owls hunt their usual meal for their offspring, then shred it into small parts for the newborn owl to ingest. As a result, the diet of juvenile owls is nearly identical to that of adult owls of the same species.

What method do owls use to feed their chicks?

During the owlet’s first few weeks, the male usually takes on the job of hunter, bringing food to feed both the mother and the owlet. This meal will be ripped apart by the female into tiny bits that the chick can ingest whole.

Owlets develop at an incredible rate and may quickly consume the same diet as their parents. Because the older chicks are the biggest and strongest in the nest, they are normally fed first, potentially leaving the tiniest and newest babies to suffer if food is short.

When do owl chicks leave their nests?

When compared to other bird species, baby owls leave their nests quite quickly, with some leaving after only four weeks or so.

Other owl species, such as Barn owl owlets, will stay in their nests for a longer period of time, maybe up to 10 weeks. This is still a rapid transition compared to other birds, who frequently stay with their parents for the rest of the spring and summer.

Do owls reuse their nests?

Owl nests are rarely reused since owls are not known for their nest-building ability. Instead, owls are opportunistic nesters, meaning they will nest in any adequately safe area.

If they can prevent it, they will avoid making a nest at all, preferring to nest in tree hollows or abandoned structures. They’re also quite good at snatching other birds’ breeding locations.

How much time do baby owls spend with their parents?

Baby owls stay with their parents for a short period of time, perhaps as little as one month. This is rather common among birds of prey, which are quick to grow independent of their parents, establishing their own territory before the next winter arrives.

When are newborn owls able to fly?

Some owlets, such as the Screech-owl, are ready to fly in less than a month, while others, such as the Great Horned owl, might take up to 2.5 months. Owls, like many other birds of prey, are ‘born ready’ and mature swiftly, learning to fly and hunt instinctively rather than by observing their parents. Owl chicks are notable for their rapid independence from their parents.