Swans are well-known for their beauty and grace, but there are numerous other facts about them that you may not know. Swan offspring are referred to as cygnets, pronounced sig-net. Cygnets retain their birth name until they are one year old, at which point they have two naming alternatives. A male mature swan is known as a cob, whereas a female adult swan is known as a pen. There is no special phrase for a group of young swans, although a group of adult swans is referred to as a flock. This article will discuss cygnets, or baby swans, including their appearance, behavior, and other traits. 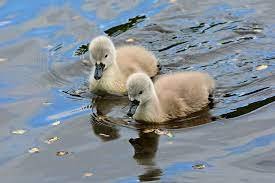 Cygnets, or young swans, hatch with a thick layer of down. They can run and swim within hours, but their parents are extremely protective of them throughout their first few months of life. Baby swans often have a dusky grey body, a delicate, downy coat, and a grey-black bill. Their feet are small and black. All cygnets have this appearance, making it difficult to distinguish between species’ young. Even the Australian Black Swan has cygnets that resemble those of every other species. Occasionally, cygnets are born with white down and are referred to be “Polish swans.” This appears to only apply to Mute swans.

Swan calves at the time of their birth

Swans while hatching from their eggs is the ultimate culmination of the female swan’s more than a month-long journey. Extremely feeble and in need of assistance, the pen (and cob) stays only a few days in the nest with her hatchlings before beginning their epic journey. After their struggle to escape the egg, the cygnets still remain encased in the waxy coating that secured them from the substances contained within.

This waxy covering gives the newly hatched swans a damp appearance, but it evaporates over the next few hours as it dries and as the baby swans brush against their mother and nesting material. Once dry, the newborn swan takes on a fluffy, light grey appearance that makes cygnets visually appealing. The weight of the cygnet at hatching is approximately 64% of the weight of the egg when it was laid (the remaining 36% accounts for the weight of the eggshell, membranes, liquids/moisture, and losses due to metabolism), and 2.5% of its final weight as an adult. 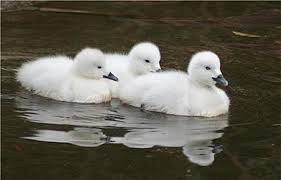 After hatching, a swan immediately takes to the water. It may be difficult to imagine that such a newborn can already learn to swim, but it’s real! At just a few hours old, cygnet swans have the strength and instincts necessary to begin swimming. The cygnet’s initial foray into the water is primarily a trial run, overseen by the mother swan. Occasionally, cygnets of swans have their first taste of little insects and other goodies at the water’s edge. These are all essential qualities that young birds must master in order to thrive in the wild.

Also, know What is a Group of Peacocks Called? 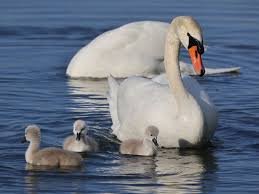 Imprinting is the process by which infants program themselves to listen to their mother’s every word and continuously follow her. This means that for the first six months of a cygnet’s life, he or she will follow the first major moving object with which it comes into touch. Because of this, they are frequently observed following their mother and relying on her for everything. 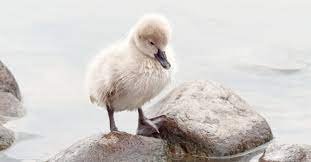 Swan chicks weigh about 250g (8.8 oz) and are about 20cm (8 in) in length. They are the largest of the young ducks, however comparable in size to the goslings. After six months, they weigh approximately 6 kilograms; after three to four years, they reach their maximum weight of approximately 14 kilograms. Swans are extremely massive and heavy birds; the Trumpeter swan is among the heaviest flying birds.

What do swan chicks eat? 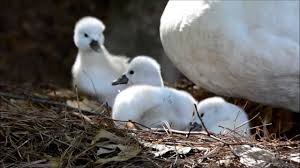 During the hatching process, baby swans consume a substantial amount of their egg’s yolk, which provides an abundance of highly concentrated macro-and micronutrients. Consequently, cygnets will likely not feed for approximately one week after hatching. The amount of yolk they take from the egg has a profound effect on their chances of surviving this vulnerable phase. After around a week, cygnets will intuitively begin feeding themselves. They will sift through water in search of microscopic organisms and feed on duckweed and other soft aquatic vegetation.

How many eggs do swans lay?

On average, swans lay between 6 and 10 eggs, but batches as large as 14 have been recorded. Typically, the female will lay one egg every one to two days beginning in late March or early April (though this varies with the species of swan and location). Because survival rates are generally low, swan eggs hatch in vast numbers.

How do swans nourish their young? 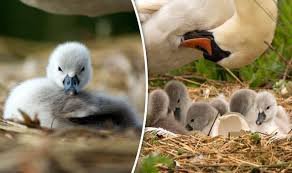 Parents of cygnets have been observed feeding their young indirectly. One approach is to pick up aquatic vegetation and leave it floating on the water’s surface, where cygnets will consume it. Paddling vigorously to stir up diverse food-rich detritus from the waterbed is another strategy. This will not continue forever, and the chicks will eventually forage for their own food.

When may cygnets begin to fly?

Generally, cygnets take their first flight between three and four months after hatching. They’ll probably only swim across the lake short; it’s a relatively safe landing in case something goes wrong! It has been observed that young swans obey their parents’ instructions and line up on a ‘runway’-like strip adjacent to the water. This is a significant moment in the cygnet’s development and represents a step toward leaving the family unit.