Owls are majestic birds who are great predators. Nocturnal birds remain active at night and sleep during the day. But how do the owls and their babies sleep? First, let’s start with the littlest owls, the baby owls. Researchers have found that baby owls sleep much like human babies in position and cycle. We will discuss more on this subject further in this article. 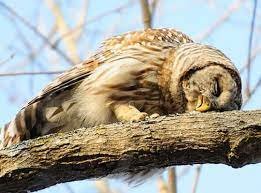 A study by the Max Planck Institute for Ornithology and the University of Lausanne, Switzerland found that baby owls sleep for a few hours, get up, feed, and then go back to sleep, similar to how newborn babies operate.

They also lie down on their stomachs, turn their head to the side and sleep in that position. Some will sleep on their sides. The heads of baby owls are heavy and the muscles in their necks are still developing so they lie down. Another research group studied the REM cycles of baby owls and found that just like human babies need lots of restful sleep for brain development, owl babies do too.

It has been believed that all owls remain active at night but it’s not the case with every species of owls. There are 200 species of owls and each of them has different features and habits when sleeping. Most of the owls sleep during the day and are active at night. Owls and birds require about 12 hours of sleep per day.

As nocturnal birds, owls tend to sleep during the day and so the answer is yes, the owls sleep. They do take short naps, and they may be active during the day if there is a predator around. While they do sleep, they don’t sleep quite the same as many mammals.

Owls are wiser animals as they sleep with half of their mind awake and the other half asleep. It is to become aware of any predators coming closer When they stay half-awake, they can protect themselves from nearby predators.

How Do Baby Owls Sleep? 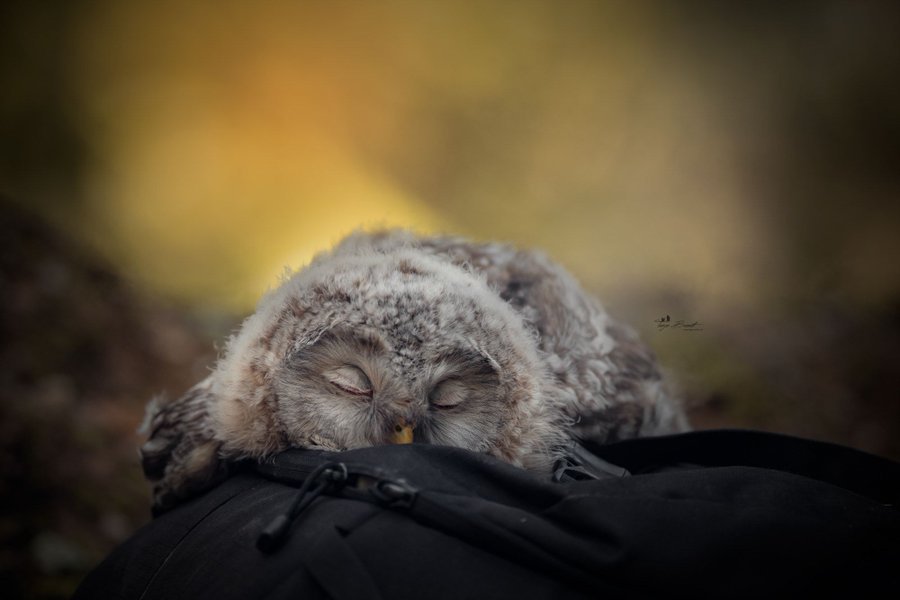 Baby owls, also called owlets, have a very different way of sleeping. Adult owls sleep similarly to other birds. Their heads are kept forward while they stand on one or both legs and grip tightly to a tree branch. Owlets, on the other hand, tend to sleep face down on their belly. They sleep like this because their heads are too heavy for their juvenile muscles to hold. As the owlets gain strength and control over their bodies, they start to sleep with their heads up like their parents.

Also, know What is a Group of Owls Called?

Like all baby birds, owlets are distinctly different from mature, adult birds. These young birds have a great deal of soft, fluffy down and generally lack clear markings, but their facial discs are one of the first plumage features to develop. The shape, size, and color of the disc can be highly useful in proper owlet identification. Eye and bill color can also help identify baby owls, though some young birds have a slightly different coloration than mature birds. For owl species that have ear tufts, owlets may also show short fluffy nubs on their heads, though they lack the full shape, coloration, and dexterity that mature owls will have with their ear tufts. The wings may also develop early in owlets, and the young birds may show barring or other markings on their first flight feathers while their bodies are still covered with indistinct down. 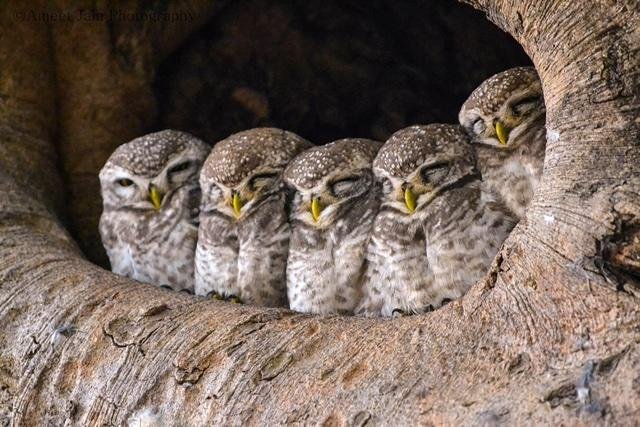 Baby owls are typically unable to fly but may have left the nest to strengthen their wings and legs by exploring nearby branches or rocks, climbing or jumping about in a process called “branching.” They may perch in unusual areas or even rest directly on the ground with little regard for being in full view of predators. They may be curious about nearby objects, even other animals, and will use their large, bold eyes to carefully observe their new world, often twisting their heads around to see things from different angles. Young owls often stay close to their siblings, and it is not unusual to see several outlets together.

What are the ways and behavior of owls during sleep?

During daytime when the sun is out owls are generally sleepy while keeping there in the upward direction. Generally, most owls will hold a tree branch with one leg or sometimes use both of their legs. The claws of owls help them by providing a firm grip on the tree branches while they are in deep sleep. Generally, you will find that most of the owls sleep with one eye wide open as during most times of their periods of sleep their half body and mind are active. 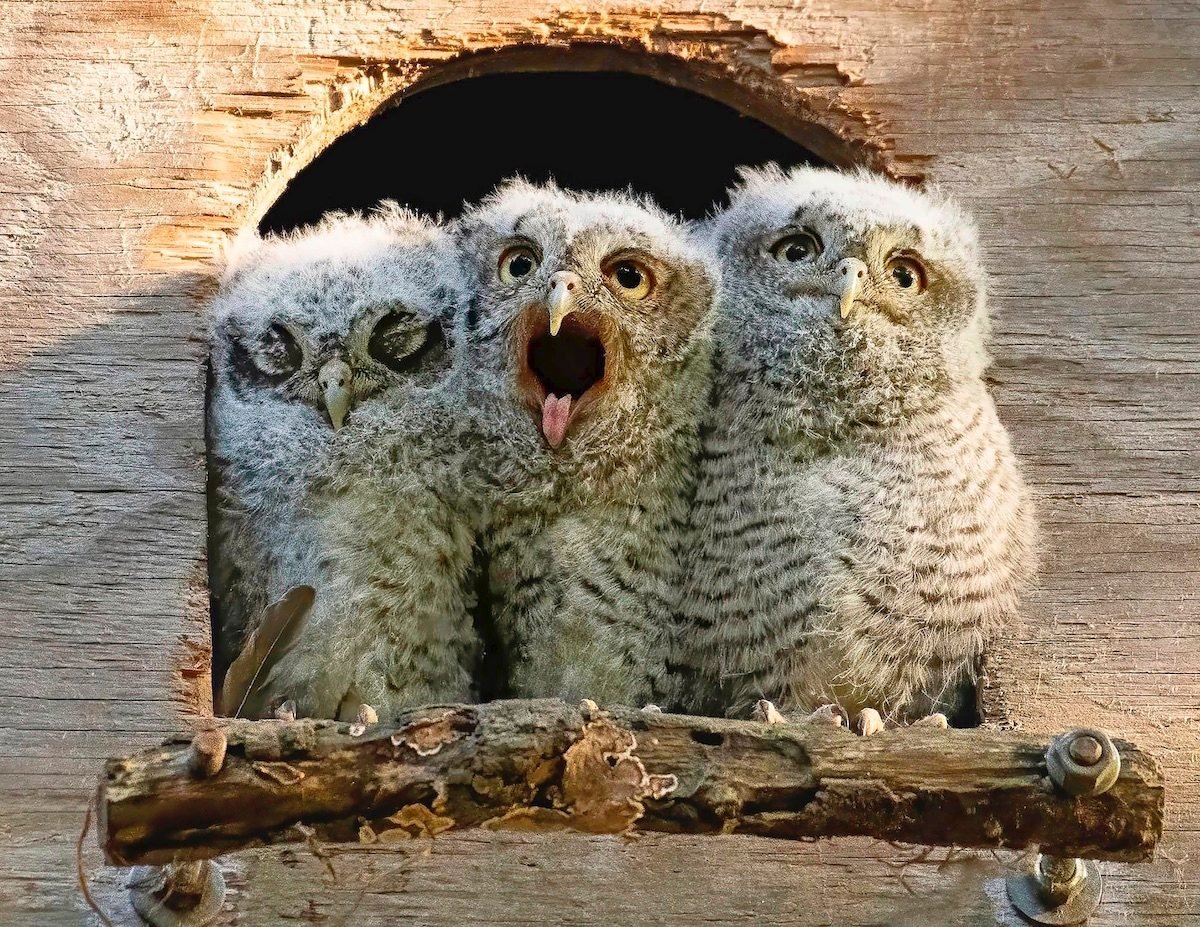 This is an evolutionary trait that helps them to protect themselves from any danger in the wild like bad weather, predators, and much more. During sleep, their half-active brain helps them in generating reflex actions that can act as a defense mechanism in case of an attack from predators.

Well, the sleeping pattern of almost all varieties of owls are similar i.e nocturnal sleeping behavior. But it is also common that you find owls in your area or in the wild during the daytime too.

Many owls sleep for short durations i.e. take periodical naps that help them to remain active. In many cases, they may hunt during the day or may go out to collect things for their nest in the daylight. So, in some cases, you may witness owls out there during the day.

What are the sleeping behaviours of baby owls?

Baby owls have an interest in bowing down their heads while sleeping. It happens due to the heavy weight of their head and weak muscles. The neck muscles are not strong enough to support the head in earlier stages of their life. As baby owls grow in shape and size their muscles build stronger and they start sleeping with their heads in the upward direction.

Where can you spot owls sleeping?

Owls are strange birds and show peculiar behavior in their surroundings. You will rarely find owls sleeping and going out in company. Owls are loner birds and mainly remain alone for most of their time.