Alabama is a state of diversity in geographical content and mountain ranges. This is the 30th largest state and one of the popular states that come 24th in a ranking list. Alabama has beautiful diversity in birds but which bird is known as the state bird of Alabama? The official state bird of Alabama was considered to be Northern Flicker also termed a yellow hammer in 1927. This bird is also referred to as a common flicker. 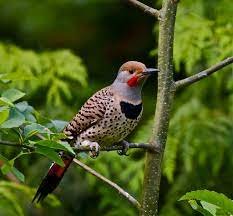 Northern Flickers (scientifically known as Colaptes Auratus) are large brown woodpeckers with bright colors under their wings. In 1927, the state of Alabama officially named the northern flicker as its state bird. Later legislation in 1980 named a state game bird – the eastern wild turkey.

Northern flickers were designated as a state bird of Alabama. These creatures got their name from the state bird’s prevalence. These birds are migratory birds that chose the state as one of their homes. Section 1-2-7 of Chapter 2 of Title 1 of the Code of Alabama, 1975, simply reads “The bird commonly called the yellow-hammer is hereby designated the state bird.”

Northern flickers are an official state bird of Alabama, mostly found in northern America. They are found in the sub-continents of the Caribbean islands and Central America. They are also found in parts of Central America, Mexico, Cuba, Denmark, Canada, and the Cayman Islands. These migratory birds often migrate from north to south regions and the northern flickers if southern regions are permanent residents. These birds are mostly seen in plain areas, near trees including forests, Midlands, clearings, and agricultural lands. They are also found in parks and yards, and also in wet regions and areas like streamside woods, flooded swamps, and marsh edges. 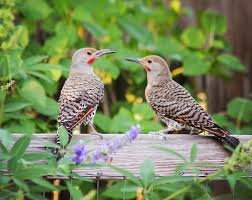 These birds are bright-colored creatures that are different from their counterparts. Male northern flickers look a little different from female ones. These birds are large woodpeckers with 12-14 inches tall and 21 inches long wingspan. They have a lot of markings, stripes, and spots with orange-red feathers on the underside of their songs. These official birds of Alabama have three colored varieties :

The male common flicker has a grey-brown colored back with broken black bars on its body feathers. The yellow shafts of its flight feathers are somewhat visible. Its two-pointed tail is mainly black, while the rump patch is white. There is a red band at the nape of its grey crown and the back of its neck. You will see a black ‘moustache’ pattern and bib below its chin right on its throat. Its cheeks are pinkish. Creamy coloration can be seen on its underparts with irregular black spots. Bright yellow coloration can be seen on the underside of its wings. The female differs by not having a ‘moustache.’ Both males and females have a dark grey bill, dark brown eyes, and grey legs. They have sharp talons to perch easily on vertical tree trunks.

What do the State birds of Alabama eat? 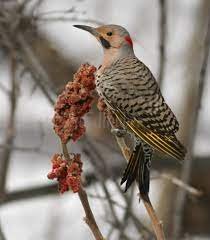 These northern flickers are a little different from the woodpeckers and therefore their diet and habits are distinct from each other. Yellowhammer feeds on the ground, basically termed foraging, and generally eats a mix of bugs, berries, seeds, and nuts. They also consume the following :

These northern tickets eat ants and will hammer on the ground like woodpeckers. The woodpeckers are best on the tree, like drilling into the woods for finding insects and also searching for large quantities of ants and nutritious larvae which are commonly found in woods.

Facts about the Northern flickers 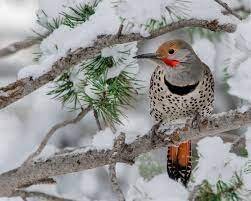 These birds mate for life and produce two families per season. Their breeding season lasts from February until July. During the breeding season, these birds remain in the same nest and males protect their territories aggressively. These birds mainly reside in their own nest but in some cases, they also rest in other damaged nests by repairing them on their own. 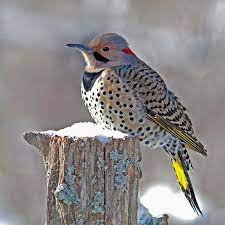 They usually forage on the ground alone, two by two, or in little gatherings. They might try and scrounge with different birds like sparrows and blackbirds. Northern flickers feed by examining with their bill and at times might get bugs in flight. These birds have an undulating flight; the rehashed pattern of a speedy progression of folds followed by an interruption makes an impact similar to an exciting ride.

Northern flicker, the official state bird of Alabama, is commonly found in various spaces and also in the mountain ranges. They have commonly seen as birds in many parts of United Asia. These birds are widespread and popular but their population is decreasing day by day and their lifespan has now become only a few years, in fact, less than their actual lifespan ranges.

What does it mean when someone sees a northern flicker?

The bright red markings of flickers are associated with fire, and in the Native American legends of northern California and Oregon, Flicker sometimes features a medical character with powers over fire. Like other members of the woodpecker family, flickers (also known as flicker birds) are considered lucky birds and are associated with friendship and happiness.

In particular, yellow-shafted years or yellowhammers are believed to bring good luck and healing; hearing their cries means that you will soon receive a visitor, and in some Northern California tribes, dreaming of a yellowhammer is the sign that a person will become a traditional healer. The Hopi see the flicker as a directional guardian, associated with the south.

What call does a Flicker make?

Flickers make a loud single-note call, often sounding like kyeer, about a half-second long. When birds are close together and displaying they may make a quiet, rhythmic wick-a, wick-a call.