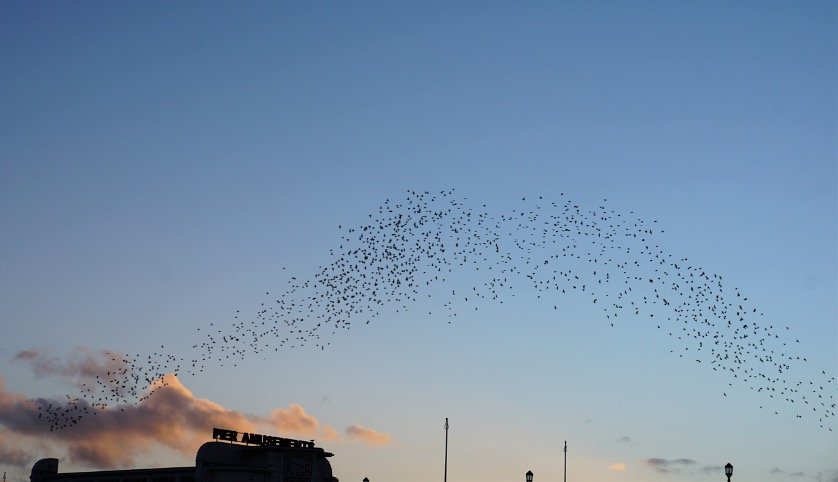 Have you ever witnessed thousands of birds flock together in the sky? If yes then you might have been startled by the beautiful scenery and wondered what they are called? It is called Starling murmuration and it mostly appears in the autumn time and you will see the stunning display in the skies with beautiful synchronization.

What is Starling’s murmuration?

Starling murmuration is a mass or a flock of thousands of birds together in the sky swooping and diving together. It is a beautiful scene to witness in autumn. Autumn time begins in November and you will witness around 10,000 birds in some places. You won’t see it at any time but most probably in the evening times before dusk. It is mostly seen in The UK.

Why do we see starling murmurations?

So you might be thinking why do sterling murmurate. Well, there are many theories that give the context for this reason. It could be because flying together in a flock might protect them from the predators and they are safe in the group.

Another reason is that they do so to keep them warm and exchange information on feeding places. When birds are in a flock, it provides them with the benefit of searching for food easily. Whatever the reason it might be, the display of starling murmuration in the evening looks like stunning scenery in the sky.

Where can you witness the stunning display of starling murmuration?

They can generally be seen in woodlands but cliffs, buildings, reedbeds, and industrial structures. Starlings like you enjoy roosting in forests, dense fields, and lakes. It is mostly seen in the UK so here are some places where you can witness starling murmur quite often.

How long does starling murmuration last?

Starling murmuration lasts up to 45 minutes or some may only a few minutes. The end of the murmuration is usually sudden; something still seemingly prompts the birds to stream into their roots which is a wonderful sight in itself.

Why is it called a murmuration of starlings?

Murmuration is an act of murmuring. When the flock of birds flies together in synchronization, you will also hear the low sound which comes from the beating of wings and that is called murmuring sound. This is the reason why it is named Starling murmuration.

Which months can you witness starlings murmuring?

Generally, you can witness the beautiful scene of starting murmuring in the autumn month.  In the UK and North America, they can be seen in winter times, starting time of winter. This is most common from November until March, especially during the colder time of the year.

How many starlings are in a Murmuration?

Generally, there are thousands of birds in a flock that fly together in the sky. Sometimes it ranges from 500 to 1000 birds and might last only a few seconds. Talking about the large murmuration then it has the number range of 100,000 or even more.

How can you describe starling murmuration in other terms?

Do starlings only murmurate once?

So before moving to their roosting site, they form a murmuration and when they are sufficient in the group they head to the places and they do each night before heading. But you won’t be able to see the starling murmuration if there are not enough starlings in a flock.

Also, know What do Peacocks eat?

How do they form a murmur?

Many scientists explain the context behind starling murmuration. When one starling changes its direction while moving or changes its speed all the other starlings in a flock change their speed and direction at the same time. As the one does the information moves across the group very quickly and they all change and move simultaneously.

As you know now when a starling changes its direction and speed, the others do the same and the information passes to the other starlings. This is explained by specialists Dr. Cavagna and Dr. Guardian that the starlings follow the ‘traffic rules’ set which was the direction form. Secondly, there is a distance between the starlings. One starling never flies close to another starling, they maintain a little bit of distance to avoid a collision.

How do they form such amazing and Stunning shapes?

Starling creates a magnificent shape. During murmuration, you may have witnessed that they create a stunning form which is another reason for its beautiful display. There is no context for this reason but it is said that starlings are drawn to complex and complicated patterns.

Do only starling murmuration?

Many other birds form a group and flock together in the sky but Starling is the only bird for whom it is termed as murmuration when they are together in a group or flock. So yes, starlings are the only birds that murmur.

Some facts about starling

Murmuration is a beautiful act that shows us the beauty of our nature and its limitless forms. How incredible starling murmuration is! It shocked and amazed the person witnessing this beautiful sight. This is truly a work of art by nature that reminds us of the value and connection to the world around us.