There are many species of robins found in many parts of different regions. The two most well-known species are the European and American robins — but they both are distinct from each other and also their habit and behavior the only closest relation between them is the fact that they both bear a bright orange patch on their chest. Despite that, these birds tend to have similar diets and nutrients and hunt for their food, these two species are also similar in escaping from the predator. But have you ever wondered what these species eat, especially American Rodents? Here we will discuss the diet and nutrition of American Robins. 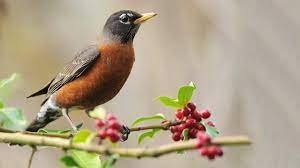 The American robin is the most abundant bird in North America. They are migratory birds that belong to songbird criteria and their common known fact is

Their common data is

Both European and American robins are opportunistic omnivores who split their diet roughly between meat and vegetable matter and who adjust their intake of different food sources depending on the time of the year. The environments they live in usually consist of four distinct seasons, and they appear to adjust their diets based not just on availability but also on situational demand. Despite their physiological differences and different environments, both robin species have developed their seasonal habits. 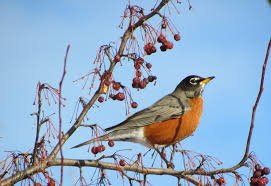 American Robins consume more fruits and berries than anything else. They also eat a variety of true bugs, caterpillars, beetles, spiders, and a few things that might surprise you.

In addition to these foods, American robins have also been recorded as eating eggs, small snakes, frogs, skinks, and small fish, depending on where they are foraging and what they can catch.

What do Robins eat in the wild?

In the wild, robins are best known for eating earthworms, beetles, and caterpillars. However, their diets are significantly more varied than this. Robins also regularly enjoy spiders, flies, termites, snails, millipedes, centipedes, and a variety of berries and fruits.

On a less frequent, and somewhat more surprising, basis, robins have been known to catch and eat garter snakes as long as eight inches. They have also been observed picking up marine vertebrae along beaches and snatching up trout fry.

How do Robins find food and hunt? 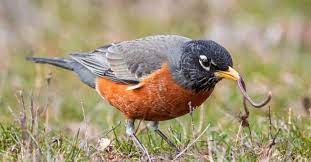 Robins, like most birds, use their sharp eyesight for hunting. From flight or while perched, they can see worms on the ground or near the surface of their tunnels. Sight is not the only sense powerful enough to make robins excellent hunters, though. They also have a keen sense of hearing, which they use to single out earthworms digging underground or to find other bugs moving about.

What do baby Robins eat?

Baby robins eat mainly earthworms in the first days after hatching. Parents will break the worm into small mouthfuls suitable for the nestlings to swallow. Slowly the parents increase the sizes and amounts until the babies are eating whole worms and insects on their own. After about thirteen days the fledgling robins are ready to leave the nest.

What do Robins eat in the winter? 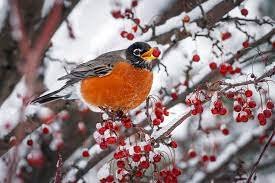 A robin’s winter diet consists mainly of berries and fruit. Fruit is an excellent source of energy for these birds in winter because it is so calorie-dense. Robins are nomadic during the winter times traveling about in a flock as they forage for leftover summer berries, including blueberries, blackberries, and raspberries. Holly berries, apples, and strawberries are all of his favorite foods.

What do Robins eat in the fall?

As the temperatures drop and the long summer days begin to wane in the fall, robins make the switch from supplementing their diet with worms and insects to almost exclusively seeking out fruits and berries.

What do Robins drink? 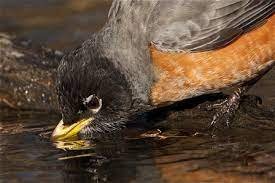 Robins drink water and they like to drink and bath regularly. That said, another great way to attract the robin to your yard is to provide a birdbath. They will utilize a store-bought bath with misters and fountains, but robins are also drawn to small ponds where they can bathe as well as collect mud for nest building.

American robins eat a wide variety of foods, and birders who are aware of these birds’ broad diets can more easily offer many different foods in their yard to attract and nurture robins all year long.

Robins do not eat birdseed, so they are unlikely to be interested in your feeders. They also prefer to forage for their food on the ground, in open areas. You can scatter the mealworms, berries, or chopped fruit around the base of your bird feeder.