Owls are a popular topic for bird enthusiasts and ordinary nature lovers alike. These magnificent beasts have always held an air of mystery and intrigue. Barred owls reside across much of the United States east of the Mississippi, across much of Canada, and into the Pacific Northwest. These birds are non-migratory and like to adhere to local areas, so if you have a barred owl nearby, odds are you’ll be seeing it for a while. 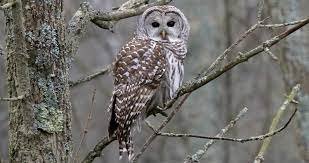 The barred owl is a huge grey and white bird that has a spherical head with what looks like horizontal bars across its eyes. They are robustly developed and have lengthy wings and tail feathers.

As observed in all owls, they have powerful, sharp claws, which they employ to catch and grasp this prey very swiftly. Their hooked beak makes it easy to shred their food into smaller pieces. Barred owls are one of the most common owls in North America, but they are also very vicious animals, known to kill and consume just about anything that moves.

Barred owls, usually referred to as Hoot Owls are opportunistic predators, meaning their diets are quite varied. They typically kill small animals and rabbits but will also take birds and even insects if there is nothing else in the surroundings. Barred owls are generalists; they don’t have a specific or rigorous diet like many other predatory birds.

The majority of the barred owl’s diet is comprised of small mammals. However, they will also consume birds, reptiles, and amphibians. Even grouse can be hunted and killed. Barred owls are not choosy eaters; if they can quickly catch and kill something, it is on the menu. 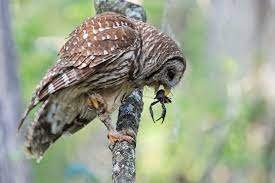 The barred owl is a carnivore, which means it eats meat. They hunt small mammals such as mice, rabbits, squirrels, chipmunks, raccoons, hares, moles, and shrews on the ground and in trees. Barred owls are opportunistic, and they will consume nearly any meat supply they can capture with their talons.

The barred owl’s diet consists of rabbits, mice, voles, bats, shrews, opossums, etc. Mice are simple for barred owls to pounce on from above, and all types of rodents are their principal food source. In the winter, they nearly exclusively consume rodents. Barred owls are such skilled hunters that they can capture flying bats. Also known to consume extremely young kittens.

In addition to tiny birds such as house sparrows, grouse, and wrens, barred owls consume salamanders, insects, turtles, frogs, snakes, chickens, and fish. Cliff swallows are one of the few birds they deliberately chase rather than take when the opportunity presents itself.

They will target bird nests for eggs and young. Barred owls consume crawfish by searching for them in shallow water. Some of them consume so many crawfish that their undersides turn pink for the same reason as flamingoes are pink. When fish are in abundance, barred owls will wade into the water to consume them.

Numerous types of grouse are common prey for barred owls. They belong to the order Galliformes, which means they have large bodies, rounded heads, and short beaks, giving them an excellent source of food.

The grouse is native to temperate and boreal woods in Canada, Alaska, northern Europe, and Russia. They range from Alaska to northern California in the United States.

Because they consume their prey completely, they regurgitate indigestible materials such as teeth, insect pieces, and fur. The majority of bones are digested for their essential elements, such as phosphorus and calcium. Prey that cannot be swallowed whole is ripped apart and the head is devoured first. Because they consume food in this manner, they lack teeth (similar to all birds).

How do barred owls locate and forage for food? 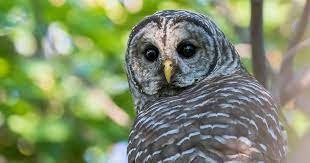 Barred owls find food by observing their hunting regions from a perch. They will search the area for prey and have excellent hearing and vision for this purpose. Once they have located their prey, they will dive and capture it with their talons.

What time of day do barred owls feed?

Barred owls often forage around dawn and sunset. They hunt at night and on occasion during the day but are most active at dusk and dawn.

What do barred owls consume during the winter months?

Small mammals (up to the size of a rabbit), birds, amphibians, reptiles, and fish are on the year-round menu for barred owls. In the winter, these owls will consume anything available, including insects.

What do young barred owls eat?

The young of the barred owl consume whatever their parents bring back to the nest. The parents may begin the infants’ diets with insects and smaller mammals, such as mice.

The young remain with their parents for approximately four months, which is longer than almost all other owl species. Consequently, as the young become older, the parents will bring larger prey back to the nest.

What Do Barred Owls Eat In The Wild?

Carnivorous birds that live in the wild are barred owls. They typically consume rats and other small mammals. However, they also consume larger animals such as raccoons and skunks. 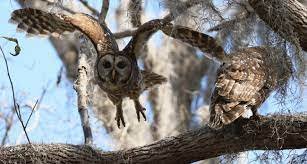 Since barred owls typically inhabit suburban areas, they are occasionally caught in traps intended for other species. As carnivores, barred owls are also at risk of being struck by automobiles. Additionally, they are prey to raccoons and weasels. Typically, a barred owl is preyed upon as a young bird. Their eggs are often a few inches long, making them the ideal appetizer for a variety of animals.

Because they are predators, smaller birds like woodpeckers and songbirds will occasionally attack families of barred owls. This frequently results in the death of several birds.