Seagulls are known as opportunistic birds as they hunt very cleverly whenever they find their prey. They are omnivore creatures. Seagulls can drink both fresh and saltwater. Most animals are unable to do this, but seagulls have a special pair of glands right above their eyes that is specifically designed to flush the salt from their systems through openings in the bill.

What do seagulls eat? 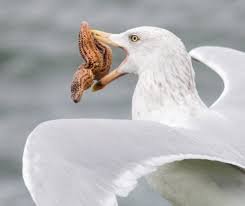 Seagulls eat fish, insects, reptiles, rodents, and many other types of foods. These omnivorous birds are highly effective scavengers and hunters. They often live in colonies ranging in size from a few dozen to several hundred seagulls, and they may forage and hunt for food together.

The foods that seagulls commonly eat include:

They are birds who consume a variety of different food, sometimes they can steal food from larger animals too.

What do seagulls eat in the winter? 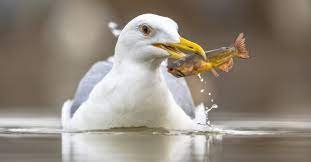 Gulls are opportunistic scavengers throughout the year, but since some species tend to move inland towards warmer environments during winter, they tend to consume more terrestrial food. This is when gulls are likely to scavenge food from farmer’s fields or raid human leftovers and rubbish inland.

What do baby seagulls eat? 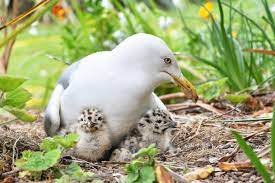 Baby seagulls eat regurgitated food from their parents until they are old enough to go and find food on their own. Seagull chicks are born following 3-4 weeks of incubation, and they are rather helpless and dependent on their parents.

The parents work together to keep the hatchlings fed for the first two weeks of life. During that time, the babies eat what their parents eat via regurgitation. Typically, the mother will continue to brood and protect the baby seagulls while the father goes to find food and bring it back to their nest.

How long can seagulls go without eating?

Seagulls eat around 20% of their body weight daily and need a high-fat and high-protein diet to maintain their dense muscles. Most gulls probably get weak without food in around just 24 hours or so. Seagulls are flexible eaters and will likely not struggle to find food whilst they are physically able to do so, however.

Although seagulls are quite effective predators in their own right, there is always a bigger, stronger, and hungrier creature that can make a meal of them. As birds that spend time looking for food on the water, in the air, and on land, seagulls are exposed to quite a few predators.

Hence These are some of the foods that eat seagulls,

What type of fish do seagulls eat?

Their prey is smaller fish and the fry (babies) of larger species. Fish that Seagulls Eat Include:

Why shouldn’t you feed seagulls?

First of all, birds like seagulls are wild animals. They have a strong urge to hunt and eat raw meat. This makes them scary as they will not think twice before attacking a human or another animal for food.

And if you feed seagulls by providing them food, then you are helping them break their natural hunting instincts. Since seagulls are omnivores, they will start looking for easy-to-get food like human food in our cities and garbage bins. This is why seagulls often create nuisance in urban areas, which sometimes leads to conflict with humans. They can carry diseases too if they eat raw meat or dead animals. Therefore, It is best to not feed seagulls by any means.

Absolutely. All species of gulls will thankfully tuck into bugs and invertebrates starting from flies, beetles, and grubs of numerous types to earthworms, arthropods, and mollusks. Gulls hunt bugs each at the same time as flying, or at the wing, in addition to choosing them off the ground.