Starlings are a fascinating species. Even automobile alarms can be incorporated into their calls because they’re so sociable, and they’re typically found in urban areas. Starlings can be found in Asia, Europe, Africa, the tropical Pacific Islands, and northern Australia. They are not native to the United States. North America and New Zealand are also home to starlings, which are competing with native birds for food. This makes them an invasive species in certain regions. The Sturnidae family include roughly 110 species of starlings. Despite minor differences in diet, they all eat the same foods. 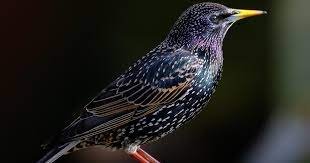 Small birds, including European Starlings, can be found all throughout Europe, Africa, and North America. A starling murmuration occurs when a large flock of starlings gathers and flies in unison across the sky in a swirling, synchronised pattern. The murmuration of starlings is one of nature’s most ethereal and amazing spectacles.

Although the colours of different species of starlings might vary, most of these birds have black metallic plumage. The chests of some are speckled, while those of others are brightly coloured. The Sturnidae family includes this medium-sized bird, which can be found on every continent.

Starlings’ advanced vocalisation is their most distinctive feature. In their own calls, they can imitate the noises they hear around them. It is not difficult for them to learn the sounds of automobile alarms, human speech patterns, and a wide variety of other things. The intelligence of starlings is extremely impressive. You’ll be able to entice them with your gaarlings in no time. Make sure they’re well-fed by providing the correct foods.

What Do Starlings eat? 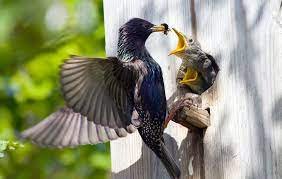 Caterpillars, mealworms, and beetles are among the many invertebrates that starlings devour as food. They’re also omnivores, although starlings are the exception. Fruits, vegetables, grains, seeds, legumes, and nuts are also staples in their diet. In addition, they occasionally consume manufactured meals that are often consumed by humans. Starlings in urban areas have been known to feed off of waste materials dumped in nearby landfills.

The following is a comprehensive list of the most popular diets of starlings:

What do starlings eat in the winter? 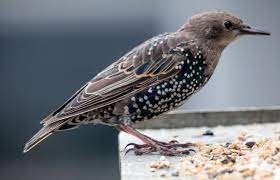 Starlings are quite active and gregarious throughout the autumn and early winter before roosting, and they graze on a wide variety of plants and small insects, including the most nutritious. The best time to watch a starling murmuration is in late autumn, between September and November, when the birds are preparing to roost for the winter.

What do starlings eat in the grass?

All kinds of creatures can be found in the grass, from worms and larvae to beetles and other insects. Leatherjackets (cranefly larvae) are a favourite food of starlings, and they can be found in lawns and meadows. With their muscular legs and habit of hopping around the lawn, starlings find it easy to navigate grasslands.

What can you feed starlings from bird feeders?

Ideally, softer grains and seeds are preferred by starlings, who will flock to a well-stocked bird feeder. Rather than luring them into their yards, many people try to scare them away, primarily because of the devastation they do to the environment and the lack of food they leave for other birds.

Having the ability to consume a lot of food in a short period of time isn’t a flaw in starlings’ character; it’s an advantage. Remember that starlings have very soft bills, thus softbill mixes go down particularly well with folks who wish to feed them from their birdfeeders. Mixes of soft grains, sunflower hearts, raisins, and mealworm are also suitable for robins; they are also suitable for thrushes, blackbirds, and the like.

What do baby starlings eat? 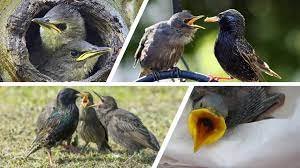 A combination of soft-bodied invertebrates, brought back to the nest by both the male and female starlings, is fed to their young Beetles, caterpillars, millipedes, cranefly larvae, grasshoppers, and crickets are all included in this group, which differs based on their habitat. The chicks are given these little snacks as soon as they are able to eat them. Nestlings will be introduced to larger insects and a wider variety of food as they mature.

How to Feed Starlings?

It’s possible to feed starlings in your backyard by placing seeds and grains in a bird feeder that also has area for soft meals like fruits and insects. Installing a bird bath is also an option, as starlings enjoy taking a bath and prefer to wait near them in order to catch thirsty insects. 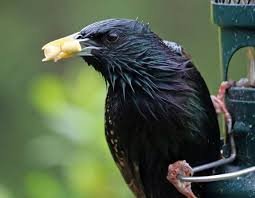 For the most part, starlings are omnivores, however they can be seen acting more like insectivores at particular times of the year. Summer will provide an abundance of seeds, grains, nuts, and other berries that starlings will eat for most of their lives.

They eat a wide variety of plants and animals and aren’t choosy about what they eat as long as it’s healthy for them to digest it. Because their digestive tracts are still developing, infant starlings, like many other baby birds, have difficulty digesting rough plant material. Soft larvae and other invertebrates will be fed to infant starlings when they wean.

It’s possible that two processed food items in the same category contain completely different ingredients. In contrast to bread, bologna contains nitrates, salt, saturated fats and protein, which are all processed foods. Most processed foods contain significantly more sodium and sugar than is appropriate for starlings, as well as a lack of important nutrients and chemicals. However, a small amount of food is better than none at all.

Prioritize things like; if you feed starlings, especially in the winter when they may be unable to obtain enough food.

How to Care for a Pet Starling? 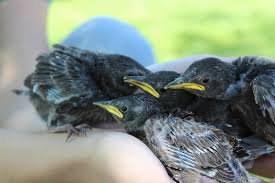 The ability of starlings to mimic human noises makes them a unique breed of pet that not many people own. If you have a starling as a pet, be careful to feed it a diet rich in insects and fruit. Grains, seeds, and leafy greens can all be fed to your pet starling as a supplement. Fresh water should also be available for your pet starling.