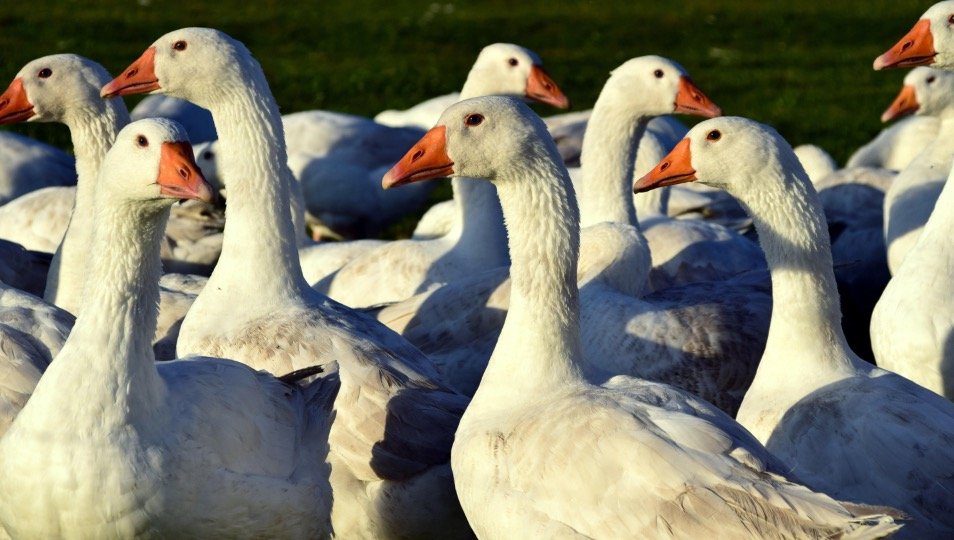 What is a Group of Geese Called?

Geese are one of the many birds of the several waterfowl species in the family of Anatidae. Most geese generally form flocks during migration and outside of the breeding season. They are often collectively called a gaggle of geese when in water or on the ground. They are referred to as skeins when flying together in huge groups.

Why is a group of geese called a gaggle?

A group of geese on land is called a gaggle as they travel in huge groups, as a result, they tend to be very noisy and rowdy. The definition of the word gaggle is a disorderly group of people. The loud noise and the chaos they create due to it is the reason they are called a gaggle. There should be at least 5-8 geese to become a gaggle.

What is a group of geese called in water?

Plump is the collective noun used for a group of geese on the water. The reason for them to be on the water is for food. People think geese hunt fishes in water but they generally feed on aquatic plants below the surface of the water.

What is a flock of geese in flight called?

A group of geese flying together is known as a skein or if they are very close to each other they can be called a wedge. Skein means a measure of yarn. A group of geese or other specific birds when flying are referred to as skein as they look like a piece of yarn when flying in their formations. (Hence they are called so).

When they fly in a tight V formation, giving an impression of a wedge that we put to keep a door open, we call them a wedge.

Why do geese fly together in groups?

Mostly geese fly in groups, they are generally dying and traveling with their families to another place. Geese also generally join other families. Sometimes they can be over hundreds of geese in a group flying and migrating together.

Flying in groups or flocks is very beneficial. The main advantage is the formation they fly in, this formation makes flying very efficient and they can easily fly further because of it. That happens because there is very little space between them which cancels the heavy flow of wind.

Collective names for other such animals

A Parliament of owls

A group of owls is known as a parliament. This is probably because owls are considered to be wise and intelligent. Even in Ancient Greek mythology, an owl represents Athena, the goddess of wisdom

A conspiracy of lemurs

A group of lemurs is known as a conspiracy. Lemurs live in small groups or communities of about 20-25 members. They are social animals. They work together or conspire against or to save themselves from the predators by using a technique known as mobbing.

A dazzle of zebra

A group of zebras is known as dazzle. It is often a maid that zebras use their stripes to camouflage when together in a huge group. This confuses the predator as it is very hard to identify an individual zebra. The other collective noun used for zebras is a herd or a zeal.

A bloat of hippos

A group of hippos is known as bloat. Mostly hippopotamuses live in a group of 10-12 female hippos and one male hippo. Since they have large bloated bellies, they are referred to as bloat.

A tower of giraffes

A group of giraffes is known as a tower. As we all know how tall giraffes are and how their necks can reach the trees’ branches. It’s their physical attributes that earn them their group name tower.

A skulk of foxes

A group of foxes is known as a skulk. The word skulk is derived from a Scandinavian word, which means to wait or lurk. Foxes are known to be sneaky and clever, fitting the common noun.

A confusion of wildebeest

A group of wildebeest is known as confusion. Wildebeest are found in Africa and they have a huge migration every year. Since they travel in such a huge amount, there is bound to be noise and confusion, hence their collective noun is confusion.

The destruction of wild cats

Also, as to why and how geese fly in different formations and how they help them in flying more efficiently. Further, we discussed what we call groups of the following animals:

We also briefly discussed why these are called so.

1 thought on “What is a Group of Geese Called?”