Selecting state birds was not a top priority when the US declared its independence in 1776. In fact, it took Kentucky until February 26, 1926, to take the initiative and identify the first state bird. Unsurprisingly, the Northern Cardinal, one of the nation’s most iconic, vibrantly colorful, and well-liked birds, was the first option. Six additional states (all grouped together around and close to Kentucky) chose the cardinal since it was so well-liked. You’d think that independent, competitive states would make a point of selecting unusual birds, but you’d be mistaken. 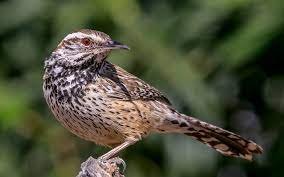 There are now official birds for each of the 50 states, but 30 of them share their choice with at least one other state. Six states selected the Western Meadowlark and five the Northern Mockingbird after the seven-state cardinal. The American Robin, American Goldfinch, Mountain Bluebird, Eastern Bluebird, and Black-capped Chickadee are further birds that are shared by at least two states. Playing copycat was rarely necessary because America’s birds offer a wide variety of suitably original options. Additionally, some absences are just as unexpected as certain selections. For instance, whereas two states selected chickens, hummingbirds or raptors are not included on the list.

Also, know What do mockingbirds eat?

It shouldn’t be surprising that Arizona is one of only 20 states to have selected a distinctive state bird. After all, the bolo, the Ridge-nosed rattlesnake, and the Colt revolver are the state’s official ties, rattlesnakes, and weapons, respectively.

The Cactus Wren, scientifically known as Heleodytes brunneicapillus couesi, is the state bird of Arizona. The Arizona State Legislature designated the cactus wren as the state bird in 1931, and it remained the only wildlife symbol of the state until 1986 when four more state wildlife symbols were chosen. The claim that the decision was made based on the bird’s song—a staccato, stammering gibberish that could be compared to a state legislative session—is probably untrue. This “song” is just one of Cactus Wren’s distinctive traits. The Cactus Wren stands out among the other eight North American wrens, which are all little, dull, reticent, and stealthy. He is large, patterned vividly, noisy, brazen, and curious. 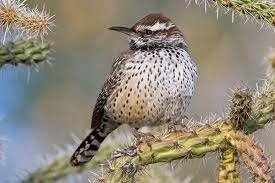 With a maximum length of 7 to 9 inches (18 to 22 centimeters) and a maximum weight of 1.1 to 1.7 ounces, the cactus wren is thought to be the largest wren species in North America (32 to 47 grams). These birds are often brown with white bars on their backs and white with dark brown bars or spots on their breasts. They are normally mottled brown in color. Above each eye, they typically feature a distinguishing white stripe.

The cactus wren’s primary call is a harsh, scratchy series of jar-jar-jar, or char, notes that get louder and higher as the song progresses. There are four to eight seconds between calls, and each call lasts about four seconds; calls can go up to 300 meters (1,000 ft). It was described as sounding “like a car that just won’t start” by Cornell University ornithologists. Although girls may sing, their voice is weaker and higher-pitched than that of men, who are the majority of singers. Males prefer to vocalize from high vantage points, such as trees, telephone poles, tall cacti, or roofs, and they start singing before sunrise. In addition to the primary call, there are at least eight more tunes. As a signal for danger, a tek is called. 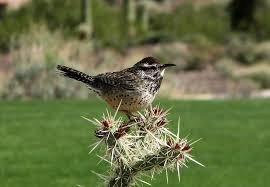 Growls act as an identification and mating call. The rack call, which is frequently the first vocalization emitted after leaving the nest, is used to locate an existing partner or other wrens. Rarely heard, a high-pitched “squeal” is only produced when building a nest. During territorial disputes with other wrens, loud notes are released. A soft peep is one of the vocalizations that chicks use to beg for food. It is well known that only young birds make dzip calls. The primary cry causes the bird’s throat feathers to dramatically expand beyond their normal posture and vibrate as the beak is held just slightly above horizontal.

The cactus wren species’ males and females typically mate for life. They often live year-round in the same area, and they frequently cooperate to protect it. Arizona’s state bird is renowned for defending its nest with great aggression. Mated couples of cactus wrens usually cooperate to combat intruders until they escape when predators approach the nest. Other bird species that nest within the cactus wren’s area have reported that the wren pecks and breaks their eggs.

Typically, the cactus wren loves to live in cacti like the yucca, saguaro, or mesquite. Cacti’s spines may provide the nests with additional protection from predators. The bird that represents Arizona is often present in all of the American Southwest’s deserts and is also widespread in Mexico. 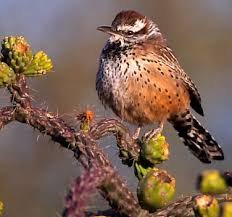 Beetles, grasshoppers, ants, and wasps are just a few of the insects that these birds commonly eat. Fruits, seeds, and very infrequently amphibians and reptiles have all been known to be consumed by them. They are said to be able to survive without access to drinking water. The cactus wren gets the majority of its moisture from its diet alone and frequently rejects water when it is offered. Their eggs typically have pink backgrounds with rusty brown speckles.

The cactus wren’s population is constant in its natural area, but it is dropping in southern California and Texas. The International Union for Conservation of Nature has categorized the species as having the least concern (LC) (IUCN). More than half of the species’ estimated seven million bird population is in Mexico. The cactus wren’s population decreased by 55% between 1966 and 2015, yet it is declining more quickly in the US than in Mexico. Although deemed stable, Arizona’s population is in decline as a result of urbanization and habitat degradation.

Since 1931, the cactus wren has served as Arizona’s official bird; however, up until 1986, it served as the state bird of Arizona as well. The Arizona Game and Fish Department sponsored a student election in 1985. The following year, Arizona’s state emblems were formally adopted, including the kids’ selections of four additional wildlife species. As a result, the Arizona ringtail, ridge nose rattlesnake, Arizona tree frog, Arizona trout, and ridge-nosed rattlesnake became the state mammals, reptiles, amphibians, and fish state.