Eagles­—popularly known as the bird of prey. It’s a carnivorous bird principally living on mammals and birds. The hunter is most popularly known for its excellent vision that can even spot an ant on the ground even while flying high above the sky. Every mighty eagle that flies high upstarts its life as a baby eagle. 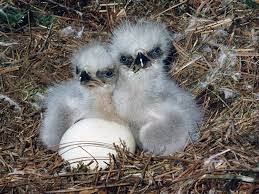 A baby eagle is called an eaglet. Eagle babies are also known as chicks or fledglings depending on how old they are. There are some sixty species of eagle that are distributed throughout the world. The mother eagle takes safety for her babies very seriously. Before the mother eagle lay eggs and sometimes even before mating, both the parents that are soon to become parents start acquiring things that would help them build their giant nests. They use grass, dried sticks, twigs from trees, branches, feathers, and even occasionally trash as a building material. Their nests are large, and dense and are often intensively built over as long as six months.

They always build a firm, strong and stable nest so that they can go on with it throughout all the weather conditions. Over time, the nests get pretty gross with old, smelly fishes that are stuck in the sticks of the nests. Then the nests become a stinky mess. Eagles do not clean their nests. Instead, they add fresh leaves to the rotten leftovers and to the eagle poop. Thus the eagles build an alternative nest within their reach in an attempt to let the one nest sit unused for a year or two to allow the weather to clean the nests out. 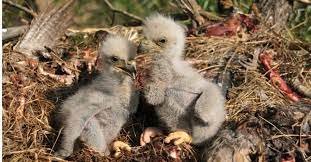 Baby eagles, like most other birds, do not know how to fly when they are born. They spend their first few months with their parents eating and gaining strength. When a baby eagle starts to learn the process of how to fly, it is known as a fledgling. This process can be started after three months but still, the mother eagle protects her babies for a year. For example, Crowned eagle and Harpy eagle babies stay with their parents for up to nine to ten months. When a baby eagle leaves his mother, he gets to choose the new flock he is going to spend the rest of his life with.

Unlike humans and many other mammals, baby eagles are born with eyes on both sides of their heads. This allows the babies to see a panoramic view of three hundred and forty degrees rather than the one hundred and eighty degrees that we see. Monocular or binocular vision has no issue for these amazing baby eagles. What humans can see from five feet away, the baby eagle can see from twenty feet away! They can also see an amazing range of vivid colors. 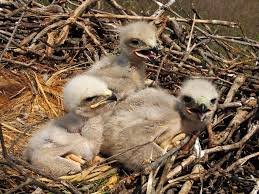 When a baby eagle is born, it will be a light grey color for a few weeks and then it will go brown all over their bodies. They are covered with down so light that they almost appear white. By the time the baby eagle acquires this color of the brown body and white feathers, it would not be a baby anymore! It takes nearly five long years for the feathers to come in completely. The vast majority of baby eagles have fluffy and thick feathers. Baby eagles also have a quite pronounced egg tooth which is a specialized tip used to pierce the egg shell but the egg tooth lasts only for around a week after hatching.

You might also be interested to know What is a Group of Eagles Called? All You Need To Know It is not sure how much a baby eagle exactly weighs. It varies from two to a few ounces upon hatching but it can be said that even the largest species of eagles weigh just around a hundred grams. It is still not known because scientists have little access to them, especially at this age. It is also known that they grow really quickly and weigh almost a pound in just two weeks. The largest eagles in the world such as the colossal Harpy Eagle have eaglets that are only a few inches when they are born. Bald eagle chicks generally tend to measure around ten to thirteen centimeters after hatching which is near about four to five inches. 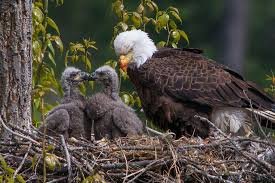 When the baby eagles are first born, they straight away start to eat the solid food their parents bring them. In the eighth week, they are in their hungriest state. The father generally supplies their first meals which are mostly raw meat like fish and other small animals that they find.  Their parents simply tear the food into smaller pieces and then feed it to the baby eagles. The parents use their beaks to feed the food to their offspring. The chicks swallow the pieces of meat whole. Baby eagles are fed generally one to eight times a day. A baby eagle has a crop that is a storage area below its chin. Food goes into the crop and is then digested as and when they are needed. The crop regulates the flow of food through the digestive tract. Most species of eagles lay a maximum of two eggs up to a typical maximum, that is, four eggs. Usually, the firstborn eaglets survive. This is because they are fed sooner than the younger ones and tend to be larger. The average time for an eagle egg to hatch from when it was laid is thirty-five days.

Baby eagles develop their hunting skills real quick. They generally watch and learn from their parents. Baby eagles will tear and eat their own food just after three to four weeks. The parent eagle simply dumbs their prey in the nest and lets the baby eagles get on with it. The baby eagle, eaglet, is known for being a fiercely strong, powerful, majestic animal.