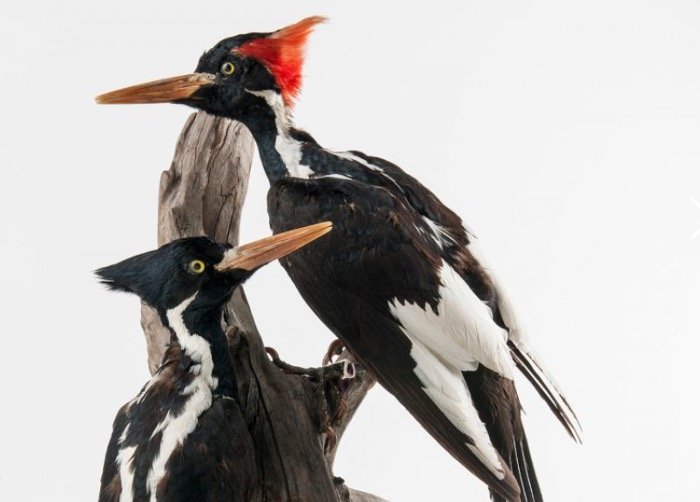 An Ivory-billed woodpecker (Campephilus principalis) is an omnivorous creature belonging to the Animalia family, phylum Chordata, class Aves, order Piciformes, and family Picidae. Its genus is Campephilus. Its length is up to 19 to 21 inches, it weighs up to 450 to 570 g, and it has a wingspan of up to 31 inches, with a lifetime of up to 20 years.

Physical features include red, black, and white skin colorations, and feathers on the skin.

In the American south and Cuba, the ivory-billed woodpecker is one of the most elusive birds. Since the last reported sighting in 1987, people have been combing the woods and wetlands of the south for indications of this famous creature, which is perhaps extinct.

The ivory-billed woodpecker was formerly thought to be a top ecosystem engineer when it was still common. Their large, pointed beaks allowed them to bore holes in trees, providing homes not just for themselves but also for other species. 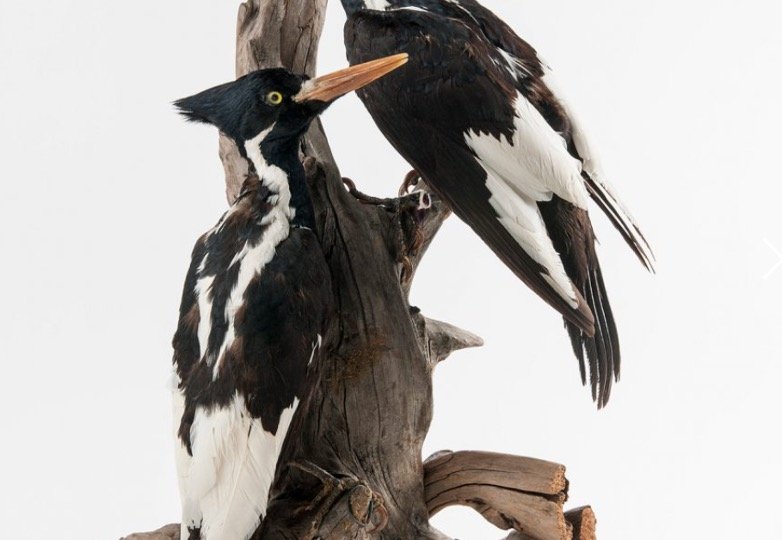 The ivory-billed woodpecker used to be widespread all throughout the southeast United States and Cuba. It prefers large forests with a steady supply of dead or dying trees caused by fires, floods, or storms.

These trees provide both food and shelter for them. With its strong beak, the ivory-billed woodpecker excavates tree cavities to build a nest. Every year, just in time for breeding season, they are said to build fresh nests. Pines, red maples, bald cypresses, and sugarberries are all good places to start a family.

Nobody knows how many of these woodpeckers are still out there. This species was thought to be functionally extinct in the wild and in captivity after decades of decline in the 19th and early 20th centuries, but there is still hope that it may be rediscovered in the wooded swamps of Cuba, Louisiana, Arkansas, or Florida. Its classification was later increased to severely endangered based on questionable reports.

• When woodpeckers chisel into trees, they emit unique noises. Experts can even tell the difference between species based on the noises they produce when burrowing.

• To keep debris out of its nose when drilling into wood, this species possesses tufts of white feathers around its nostrils.

• Although the ivory-billed woodpecker is a sedentary bird, some researchers believe it may wander about from time to time to take advantage of newly fallen trees.

The ivory-billed woodpecker’s etymology is Campephilus principalis. Campephilus is a genus that is named after a combination of two Greek words that roughly translate to “love of caterpillars.” Principalis is a Latin term that means “original” or “first in significance,” which might be a reference to this species’ immense size. The American and Cuban ivory-billed woodpeckers are the two recognised subspecies.

Long ivory-colored bills, curved black claws, and a prominent crest on the rear of the skull distinguish the ivory-billed woodpecker. The bird’s plumage is glossy black with white stripes that go from the wings to the side of the head.

White is also visible on the innermost wing feathers, which is especially noticeable when the wings are folded against the back. This bird is the biggest woodpecker in the United States, ranging between 19 and 21 inches long.

Overall, males are somewhat bigger than females. Their crest is likewise red rather than black. The ivory-billed woodpecker’s whole existence appears to be dependent on trees. It spends all of its time foraging, roosting, and breeding in and near trees.

Each married couple presumably has their own home zone, but the woodpecker isn’t territorial or protective, as it exhibits no hostility toward other woodpeckers. While it isn’t sociable in the traditional sense, it has been spotted in groups of three or four birds at a time.

The ivory-billed woodpecker forages for food for most of the day. When they emerge from the hole in the morning to preen and call for mates, they are at their most active.

Their activity decreases somewhat in the middle of the day, then increases again in the evening. They roost in different cavities as the night falls. The ivory-billed woodpecker is not reported to migrate; it is likely to stay within a few kilometres of its original nest.

Despite the lack of documented sightings, the IUCN Red List still classifies these woodpeckers as severely endangered. Deforestation has a disastrous effect on this bird’s population numbers since its entire survival is based on extensive tree cover.

According to our understanding of closely similar woodpecker species, raccoons, snakes, owls, crows, and hawks are likely to have eaten this woodpecker. The majority of predators would have targeted eggs and juveniles, but a huge bird of prey may have taken on a fully mature woodpecker.

Regrettably, there isn’t much information available on the woodpecker‘s reproductive behaviour. Based on the scant data available, this species is thought to have started building a nest in January and subsequently deposited a clutch of up to six eggs in February or later.

The parents incubated the chicks for around two weeks before they grew their full-flight feathers, which took another five weeks. Even after it has learned to forage on its own, a chick’s attachment to its parents can persist for more than a year. This species’ lifetime is unclear, but some think that it might survive for approximately 20 years.