There are 200 species of owls who reside in various different places. These birds are known as nocturnal as they are active at night and mostly hunt on their prey at night. During the day some of them sleep in their nest. Different owls produce different sounds such as hooting, screeching, and so on. Among them, one of the most popular species is the screech owl. The most common noise that this owl makes is known as hooting. But their sound and noise vary from species of owls and each species has specific noise and a different unique call. They also sound growling, barking, and even shrieking sometimes.

Here we will discuss screech owls and how they sound. 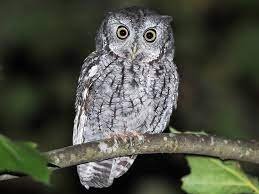 The eastern screech owl is gray, red, or brown with heavy streaks below and darker bars on the back. Look for small ear-like tufts on the head and a yellow bill. The western screech owl looks similar but is almost always gray. These birds of prey have square heads and dark grey bills.

Eastern screech owls in a pine tree. A screech owl measures 8-1/2 inches long, or about the size of a beer glass, with a wingspan of 20 inches. 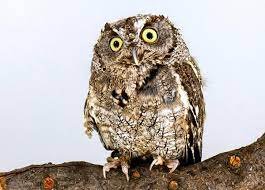 The female lays four to five white eggs in debris at the bottom of a nesting cavity. As they lose habitat to development, these owls need friendly places to call home. You may be able to attract them to your backyard with nest boxes. The birds will use the box for both roosting and nesting.

If you yearn for your very own owl visitors, it is possible to attract them to your yard. Janet Kirk of Fort Myers, Florida, has proof that patience pays off. She put up a nest box four years ago, and a female eastern screech owl finally moved in. A month later, the owl’s mate showed up, and eventually, Janet and her family watched three baby screech owls fledge.

What Do Screech Owls Eat?

Their diet consists of insects, including worms and moths, small mammals, other birds, fish, spiders, and reptiles. Screech owls are fond of water, so get in the habit of looking for one at your bird bath or water feature at night. You won’t hear the bird arrive because an owl’s feathers are specially made for silence—the super-soft surface and fringed edges keep prey (and us) from hearing them swoop in.

When you think of an Eastern Screech-Owl, think of a horse on helium: The little raptor lets out a descending whinny, capped off with a trill. (Males usually call at a lower pitch than females.) In general, the bird is a master of vibrato; it uses a monotonic and soothing trill to converse with its kin, too. The screech-owls out West, meanwhile, have a call that sounds more like an errant bouncy ball. 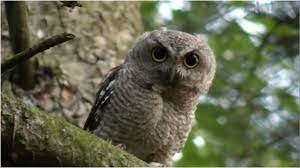 They sound more like a screeching noise. Screeches are sounds that are generally produced after dusk and before dawn. This sound is made in a high-pitched noise while attacking the other animal or scaring off threatening, specially produced by great-horned owls. Then there are other species of owls known as barking owls who make this screeching sound at the time of the breeding season. This noise made by these owls is termed a screaming owl as it is similar to a screaming lady.