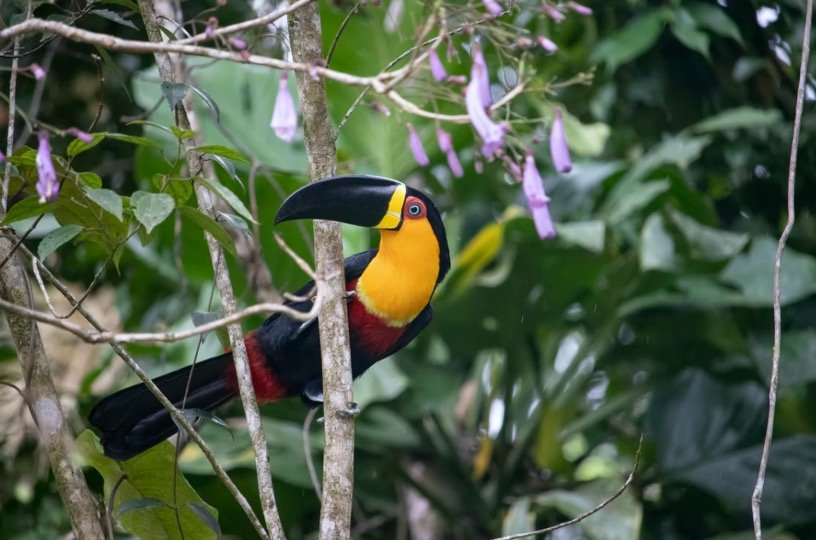 A keel-billed toucan (Ramphastos sulfuratus) is an omnivorous creature belonging to the Animalia family, phylum Chordata, class Aves, order Piciformes, and family Ramphastidae. Its genus is Ramphastos. Its height is up to 17 to 22 inches, it weighs up to 4.7 to 8.8 pounds, and it has a wingspan of up to 43 to 60 inches, with a lifetime of up to 15 to 20 years.

A keel-billed toucan is a bird that feeds on fruits, eggs, and insects. The small body and enormous, colourful beak are the most distinctive characteristics. Keel-billed toucans are preyed upon by humans, weasels, and larger birds.

Physical features include yellow, green, red, black, and orange skin colorations, and feathers on the skin, with a top speed of 39 mph.

Keel-billed Toucan bills come in a variety of hues. Due to their huge, multicoloured bills, keel-billed toucans are often known as “rainbow” toucans. Because of the vivid yellow patch on their breasts, they are sometimes known as “sulfur-breasted toucans.”

These tropical birds flourish in Central and South America’s humid climes. They are poor flyers and prefer to hop over the canopy’s thick foliage. Despite their rainbow bills, they might be difficult to notice since they dwell extremely high up and do not fly very often. 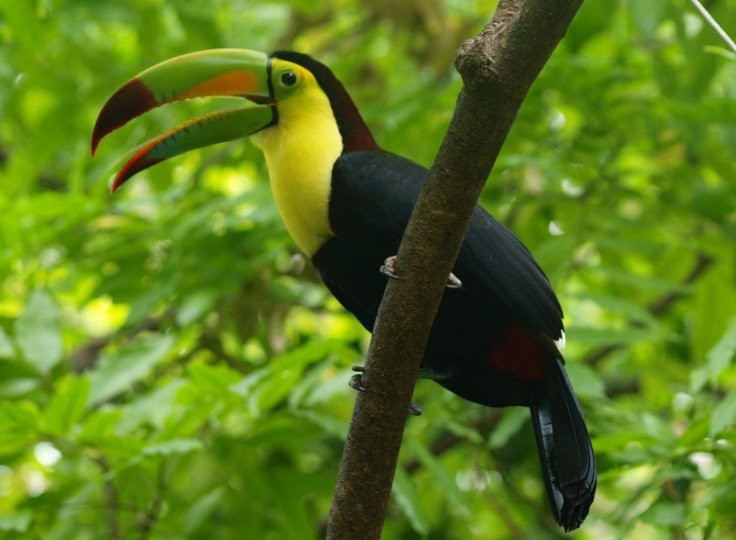 These brightly coloured birds may be found throughout Central and South America. From southern Mexico through Colombia and Venezuela, they are represented. They love tropical woods that are both dry and wet, as well as mangrove forests.

They live in the rainforest’s upper canopy, where they can effortlessly leap from branch to branch. The thick leaves also give protection and shelter. These birds can be observed roosting in tree holes late at night.

Numerous toucans, up to 5 or 6 individuals per nest, nest together in the confined area. These toucans are threatened by habitat loss, yet they are not yet classified as endangered. They’re hunted for their flesh and beaks as well.

Last but not least, toucans are popular illegal exotic pets. For these reasons, their numbers are progressively declining, despite their extensive distribution across their environment. According to the most current population estimates, these birds number between 50,000 and 500,000 people. 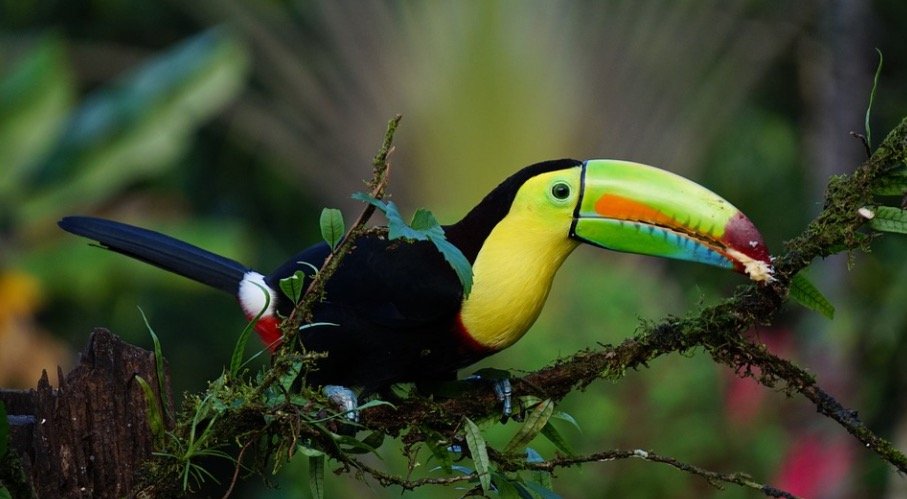 The sound produced by these birds has been compared to that of a frog. Because the sound is fairly loud, it may be heard from a long distance. They’re called “flying bananas” because of their huge, curving bills.

“Rainbow-billed toucan” and “sulfur-breasted toucan” are two of their nicknames. Both parents contribute to the care of the eggs and young toucans.

Ramphastos sulfuratus is the etymology of the keel-billed toucan. This name translates to “big yellow beak,” with sulfuratus referring to the bird’s sulfur-breasted look. R. s. brevicarinatus is the scientific name for the present subspecies.

Guatemala, Colombia, and Venezuela are home to this subspecies. Its name refers to its shorter beak and means “short keel.” 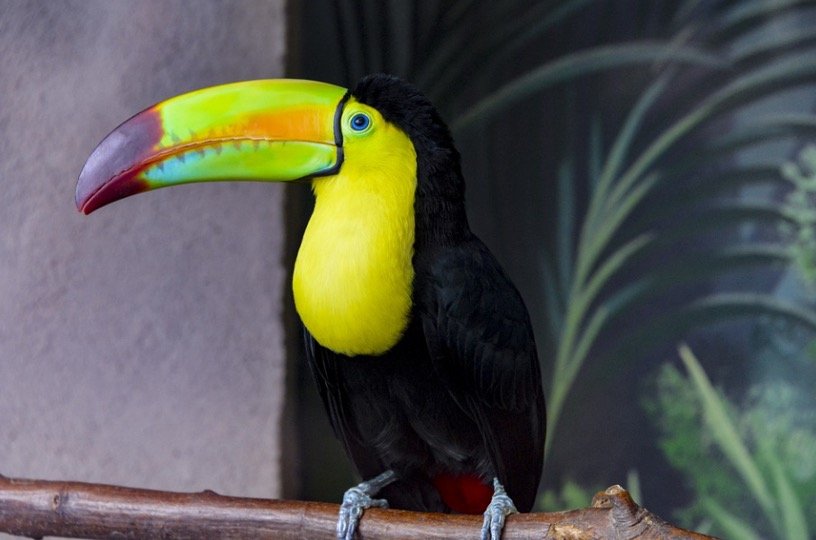 The bodies of these birds are tiny and black, with a brilliant yellow spot on their breasts. Their feet are blue, and the skin around their eyes is green. Their feet contain two front toes and two rear toes, making it simple for them to hold the branches of the rainforest canopy.

Red feathers adorn the tips of their tails. The booming cries of these birds are well-known. These sounds like frog cries may be heard for up to a half mile. Despite the fact that their beak appears to be heavy, it is hollow and light.

The toucan’s huge beak, which they can swing and peck with, may be one of its defensive adaptations. Another advantageous adaptation of the toucan’s beak is its ability to reach for and pluck fruit with great dexterity.

The keel-billed toucan is a diurnal bird, meaning it sleeps at night and is up during the day. These birds are gregarious creatures who build their nests and flocks in family groupings. They like tossing fruit at one another and engage in sword-fighting and fencing with their beaks. 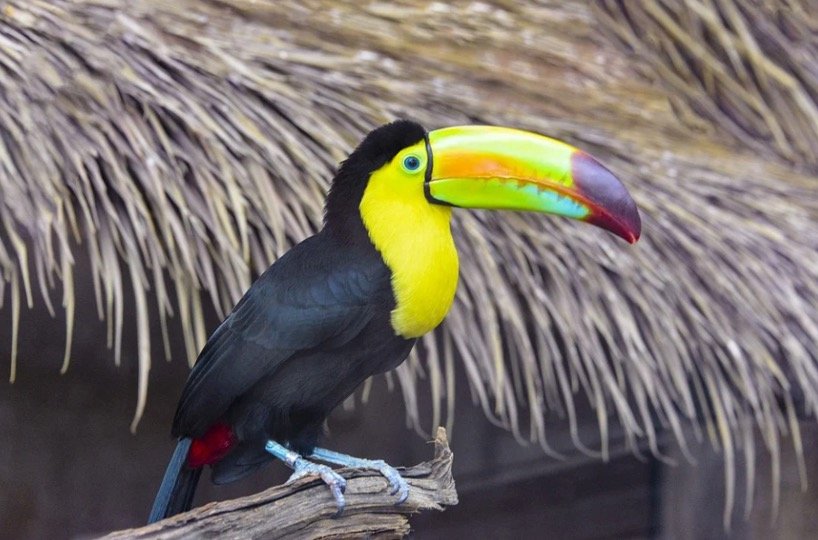 Fruit and berries are the main foods of these birds. They are, nevertheless, technically omnivores. Keel-billed toucans supplement their fruit diet by eating insects, lizards, and snakes on occasion.

Many rainforest trees have adapted to the fact that their seeds survive the digestive processes of numerous bird species. Toucans and other rainforest flyers aid in the distribution of fresh seedlings, allowing trees to sprout and develop.

Despite this, they have witnessed a population drop in recent years. The majority of this is due to habitat loss, which makes people a threat to the keel-billed toucan. 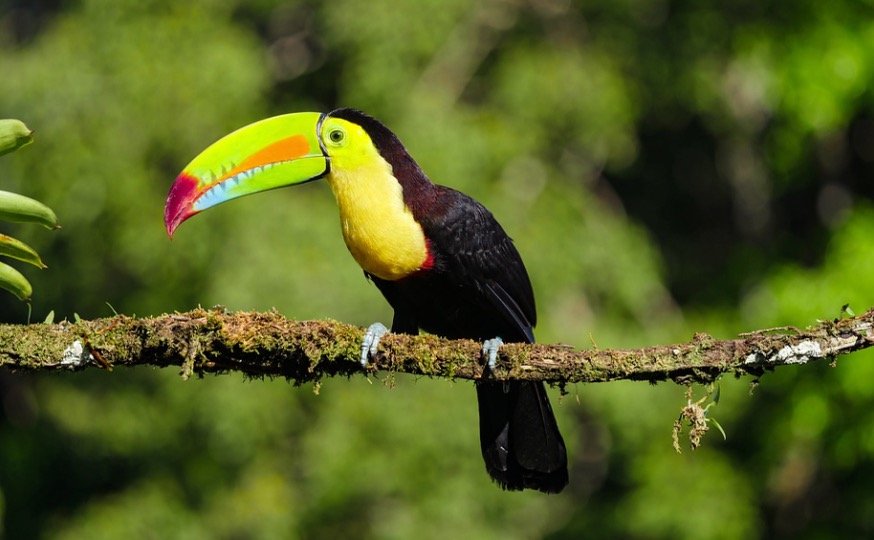 These gregarious birds are monogamous for at least the first year after mating, if not longer. A female keel-billed toucan will deposit two to four eggs in a tree cavity. After 15-20 days of incubation, these eggs hatch into babies.

The beaks of keel-billed toucan chicks are not fully grown when they first hatch. They hatch with their eyes closed and no feathers on their bodies, much like other birds. The chicks have strong and mature bills at 8–9 weeks and are prepared to leave the nest. The lifespan of keel-billed toucans is roughly 15-20 years.