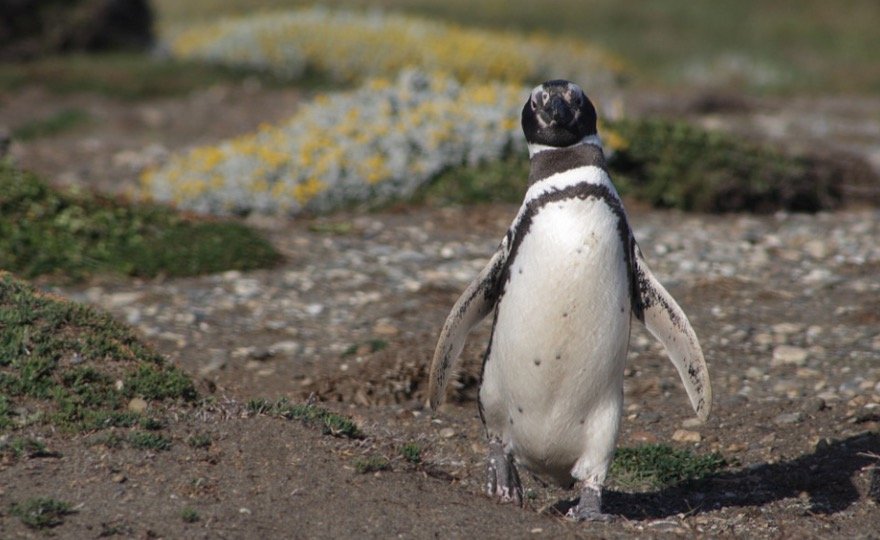 A magellanic penguin (Spheniscus magellanicus) is an omnivorous creature belonging to the Animalia family, phylum Chordata, class Aves, order Sphenisciformes, and family Spheniscidae. Its genus is Spheniscus. Its length is up to 24 to 30 inches and it weighs up to 5.9 to 14 pounds, with a lifetime of up to 15 to 20 years.

A magellanic penguin is a bird that feeds on cuttlefish, squid, and sardines. The black beak and small wings are the most distinctive characteristics. Magellanic penguins are preyed upon by sea lions, leopard seals, and killer whales.

Physical features include brown, grey, black, and white skin colorations, and feathers on the skin, with a top speed of 22 mph.

South American shores are home to Magellanic penguins. They consume fish and crustaceans and are carnivores. Nests are built in burrows and even under shrubs by these penguins. They are very gregarious creatures who live in groups of up to 400,000 penguins. 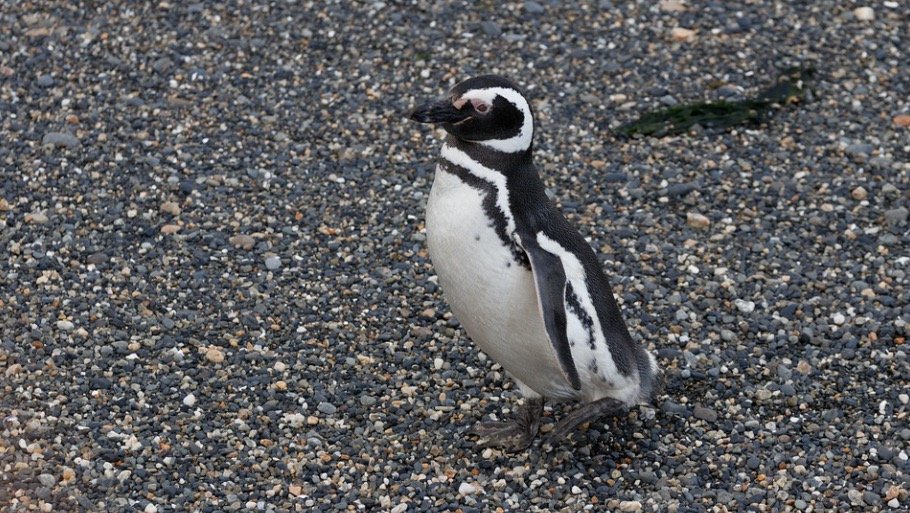 This penguin may be found near the southernmost point of South America. specifically, on Chile’s and Argentina’s shores, as well as the Falkland Islands. The environment in which these penguins dwell is arid and mild.

The majority of their time is spent in the ocean seas off the coast of South America by Magellanic penguins. They normally remain within 150 feet of the beach. During the mating season, they migrate to South America’s grassy coastlines.

They establish their homes in burrows or under bushes. Magellanic penguins migrate north along the South American coast in the winter. They may travel all the way to Peru or Brazil. As per the IUCN Red List of Threatened Species, Magellanic penguins have an estimated population of 1.1 to 1.6 million pairs.

Magellanic penguins are classified as “near threatened,” and their numbers are declining. 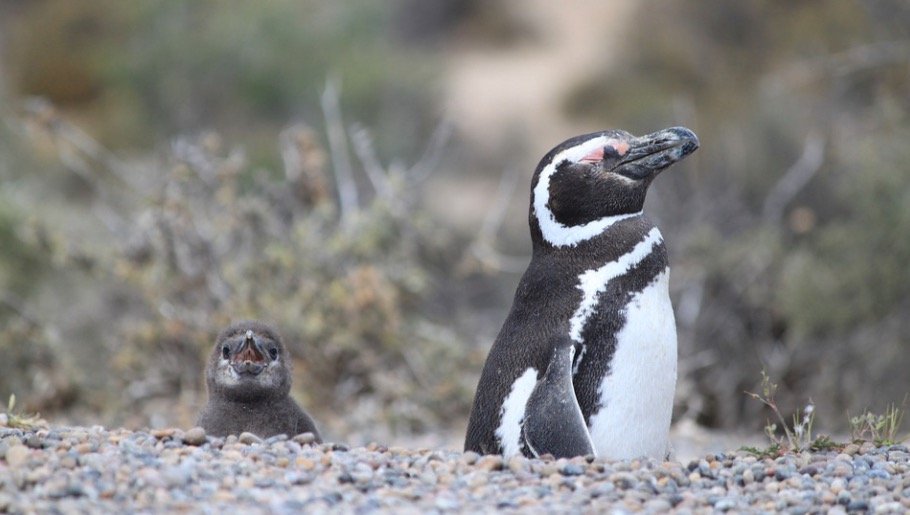 • The Potter Park Zoo has a group of Magellanic penguins.

• These penguins are on exhibit at the Cincinnati Zoo.

• See the Magellanic penguins in the Tuxedo Coast show at the Jacksonville Zoo and Gardens.

• If they become too hot, these birds may lose their feathers to cool themselves off.

• Krill, cuttlefish, and squid are among their favourite foods.

• Listening for a certain sound can help a female penguin find her partner.

• The salt they ingest from the ocean water is pushed out by unique glands in these birds.

• The number of these penguins is dwindling. 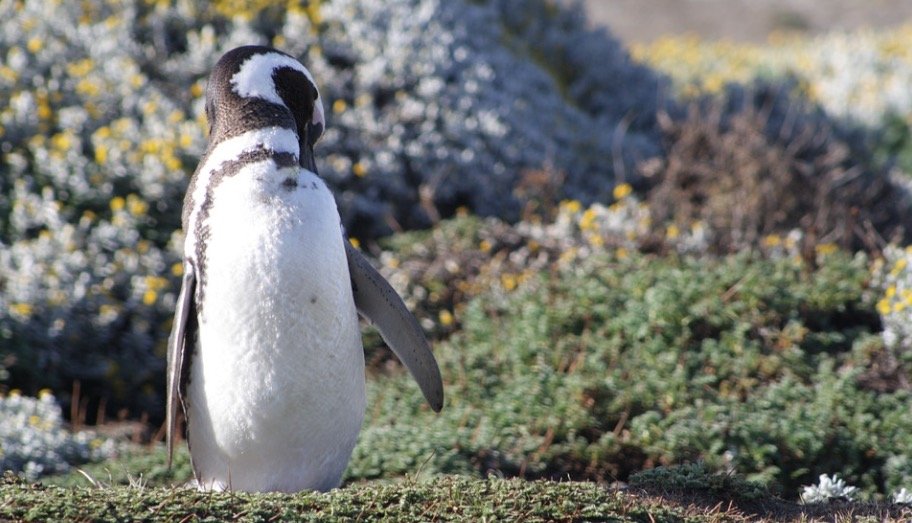 The Magellanic penguin’s etymology is Spheniscus magellanicus. Magellanicus is the name of the Portuguese adventurer Ferdinand Magellan. As he sailed near South America in 1520, he took note of these penguins. It is a member of the Spheniscidae family and belongs to the Aves class.

The backs, heads, and wings of Magellanic penguins are all covered with black feathers. They have two black stripes across the top of their breasts and white feathers on their underbelly. This distinguishes them from their endangered African penguin cousin, which has only one black stripe on its breast.

A ring of white runs from their chins to above their eyes on Magellanic penguins. These birds have a height range of 24 to 30 inches. They may weigh anything between 5 and 14 pounds. Males tend to be bigger than females.

A 30 inch tall Magellanic penguin, for example, is the same height as two bowling pins piled together to form a tower. A 10-pound penguin is around the same size as a domestic cat. The biggest member of the Spheniscus genus is the Magellanic penguin.

A Magellanic penguin’s flippers, as well as its slippery feathers, enable it to swim quickly through the water. This penguin can go at a top speed of 15 miles per hour.

This amount of speed aids them in catching prey such as fish and crabs. As they swim around the ocean, these penguins absorb a lot of seawater. They have salt-releasing glands near their eyes, so they don’t have too much salt in their bodies.

When a Magellanic penguin becomes overheated, it loses part of its feathers to cool off. To enhance air circulation, it has been observed holding its wings out to the sides.

This penguin, like a dog, will pant to cool down from time to time. When people approach a flock of Magellanic penguins, the birds flee to their burrows for protection.

Furthermore, the fact that a colony of penguins can number up to 400,000 provides protection from predators. There’s safety in numbers. The colours of a Magellanic penguin safeguard it from predators while also keeping it disguised from prey.

Because of the light seeping in from above, a penguin’s white underbelly keeps them hidden from fish and other animals. Furthermore, the black feathers on their backs blend in with the dark ocean waters, making them invisible to some predators.

Countershading is the term for this colour combination. This bird is unquestionably a social creature, as it lives in a colony of hundreds of thousands of other penguins. A colony is a collection of penguins.

When approached by people, these birds flee, although they are violent toward other penguins. In fact, of the several kinds of penguins, they are renowned for being one of the most hostile.

Male penguins that have just attained sexual maturity battle with other males before mating season begins, resulting in serious injuries. This rivalry includes biting, fluttering wings, and loud cries. Female Magellanic penguins also compete with one another for males. 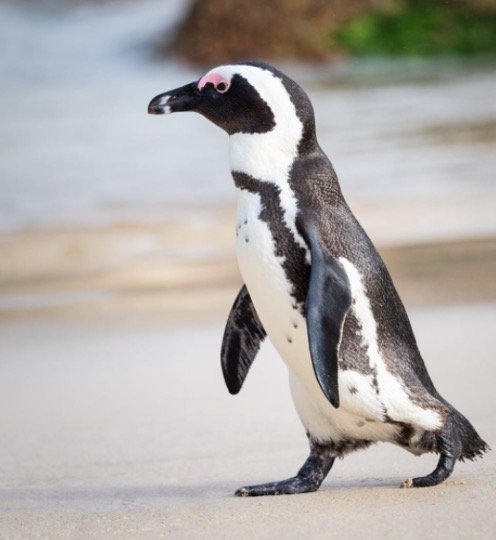 These birds consume krill, cuttlefish, squid, anchovies, and sardines and are carnivores. One of the most fascinating facts about these penguins is that they seek food by diving from 100 to 200 feet into the water.

Magellanic penguins are known for foraging in groups. When a big group of penguins dive for food, they may catch more fish than a single penguin hunting alone.

While remaining on the beach, they are devoured by sea gulls, rats, foxes, and even wild cats. The loss of their food source is also a concern for these penguins. Many of the same fish that these penguins consume are caught by commercial fisherman.

The competition for food with the commercial fishing sector has put several varieties of penguins in jeopardy. Oil spills and other forms of pollution pose a hazard to Magellanic penguins.

Flooding puts penguin babies and eggs in jeopardy along these coastlines. These penguins are officially classified as near threatened, with a declining population. 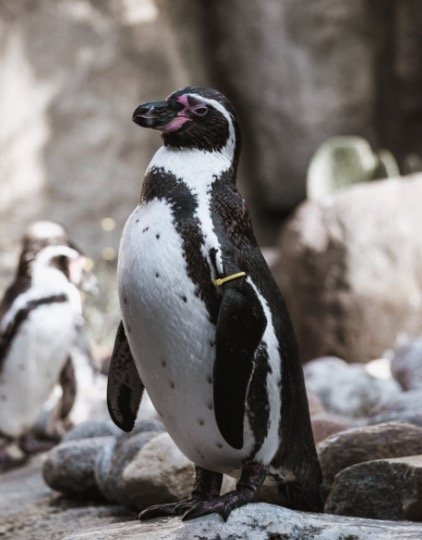 These penguins have only one mate. Every mating season, beginning in September, they rejoin with the same partner. How can a female discover a specific male in a colony of hundreds of thousands of penguins?

After all, these penguins make quite a racket. They create a donkey-like braying sound. A female penguin, on the other hand, can distinguish her partner by his distinct cry. In October, this bird lays its eggs.

A female penguin lays two eggs in a tunnel for protection. The eggs are incubated for 40 days. The male and female share the responsibility of caring for the eggs during this time.

While one bird is keeping an eye on the eggs, the other is out in the water looking for food. Chicks are the name given to newborn penguins. They are born weighing only a couple of ounces and measuring around 3 inches in length.

These young ladies are completely reliant on their parents for everything. They have grayish-blue downy feathers and don’t start growing waterproof feathers until they’re about a month old. With a light coating of feathers, a burrow acts as a warm shelter and protection for penguin babies.

Penguin chicks consume the prey that their parents bring to them. One of the parents consumes the prey before regurgitating it into the mouth of the chick so that the infant may digest it.

A chick’s ability to devour little bits of ripped up fish and other food increases as it grows bigger. When penguin chicks have emerged, they depart the nest. When a chick fledges, it acquires a full set of feathers that it will have as an adult.